In the history of the greatest horizontal shooting games of all time, both R-Type and Gradius are always somehow present in any relevant discussion. However, many of those who also consider them to be difficult games have a hard time dealing with the checkpoints and the painfully slow default speed of their respective ships. Assuming that these people would still be game for this particular shooting style, I can now attest that Last Resort is the compensation they certainly need - especially for R-Type fans because, to put it simply, Last Resort is by all means an easier take on R-Type. It's just as fantastic in graphics and sound, but the decent starting speed of the ship and the absence of excessively hard checkpoint recoveries are very attractive if you want something more bearable challenge-wise.

As is the case with the later Pulstar, some people believe that part of Irem's staff also worked on Last Resort. The graphic design is definitely to blame for this assumption, even though there's a uniqueness to the overall style of the game. Particularly amusing are the tiny men/pilots ejected from pretty much every destroyed enemy, which lends it a singular feel and further deepens its shadowy relation to Irem. The inspiration drawn from the anime film Akira is also evident as you start the game amidst a busy rendition of its Neo Tokyo setting. As the stages unfold, scary bosses try to stop you while you pilot that pointy ship through rain over the ocean, face an emerging submarine, weave across laser-infested corridors and battle a huge spaceship before entering the final enemy's lair. 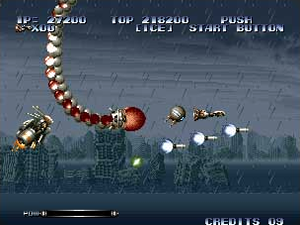 Where have I seen this snake creature before?

With only two buttons to be used, the gameplay is pretty straightforward and requires very little to be learned, basically expanding on the classic scheme of R-Type. Kill specific enemies in a wave or a particular carrier to release speed-ups (S), speed-downs (mirrored S) or colored power-ups. These power-ups are defined by their inner characters (G, H or L) and their cycling colors (red or blue). Take any of them to activate an invincible satellite that remains permanently attached to the ship and can be used both for offense and defense, since it blocks all regular enemy bullets.

Moving the ship causes the satellite to rotate around it, and at the press of the B button you can lock it in place or release it to continue rotating. As soon as the sattelite is activated the player is also entitled to use the charge shot by holding the fire button (A). Once charged and released, the satellite will dart forward from its initial direction with great destructive power, and the longer you hold the button the more powerful the attack is. The color of the last power-up collected is also important for the charge attack because it defines how the satellite behaves upon hitting a wall. Red will make it trail along the surface, blue will make it bounce around. In both cases the satellite will automatically return to the ship once the attack is done.

Upon collection of the second power-up the letter inside it activates its corresponding weapon: G is a set of two napalm bombs with trailing capabilities dropped above and below the ship, H is a set of straight missiles with very slight homing ability and L is the classic straight laser. It then takes just two successive power-ups (regardless of letter type) to max out the ship's attack power. You can cruise through the game with any of these weapons, but at certain spots the ground bombs (G) are certainly more helpful. Some examples are the turret corridor in stage 2, the initial laser cannon area of stage 4 and the whole scramble around the large battleship of the last level + last boss. I use missiles mainly against the 2th boss, and laser on the 4th boss due to its piercing ability making it possible to hit the little turrets on the other side of the boss's body.

No matter how you look at it, you can't really say there's something technically special about Last Resort. Not only is the gameplay derivative from R-Type, but it even copies some of that game's traits - like the way your ship gets drawn to the center of the screen as the bonus of 10.000 points gets computed. Slowdown can be heavy during boss confrontations, as well as flicker. What Last Resort does, and does really well, is keep a steady flow of action from beginning to end while allowing the player to get back on his knees upon death with no heavy work/practice required. I daresay you can beat the game without taking any speed-ups, such is the ease provided by the default speed of the ship. Furthermore, the game is finely suited both for a stock joystick with no autofire (abuse charge shots to win) or an autofire-enabled controller where you pretty much don't need to charge. It's a fun ride in whatever form you take it.

Another aspect where Last Resort shines is in its amazing soundtrack. Diverse and pumping with lots of cool bass, it matches the graphics with outstanding results. I can imagine people complaining that the game is too short, but it must be known that SNK designed it as a shooter with two loops. Of course the second time you play enemies and bosses become more aggressive. There is no intricacy in the scoring system whatsoever, and the only extends are achieved with 60.000 and 130.000 points. Last Resort is also another example of a game with a considerably steep default highest score.

Other than on the Neo Geo AES and its CD version, players are also able to enjoy Last Resort on the PSP, PS2 and Nintendo Wii by means of a compilation titled SNK Arcade Classics Vol. 1. It includes 16 Neo Geo games, of which only Last Resort appears as a representative of the shmup genre. Prior to playing it on the AES I practiced and credit-fed the game on the PSP. In the high score below I reached stage 2-3 playing on MVS difficulty with a turbo controller for proper autofire (I didn't use charge shots at all). 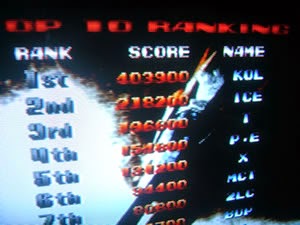