With the exception of the recent Choplifter HD, helicopters have been totally absent from the shmup scene for a long time. But alas! There was a time when it wasn’t so. Sega’s helicopter game inspired by Blue Thunder and Airwolf might have been totally forgotten by the company during the 90’s, but at least Thunder Blade made many people happy during its heyday, be it at arcades or home systems. Well, maybe not so much in the latter category, given how much downgrading had to be done on the ports... However, considering that Super Thunder Blade is a pseudo-sequel instead of a port, the PC engine version could then be classified as the most faithful rendition of the arcade game.

Of course being faithful is a completely relative statement in this case, for the PC Engine could never equal or even come close to the superscaling capabilities of the Sega board. It does resemble the arcade look more than other ports for mainstream video game consoles, most notably the Master System’s (just for reference, the port for the Sharp X68000 computer is considered to be the best conversion). In Thunder Blade for the PC Engine the score displays and the stage progress meter were properly reproduced, but the same can’t be said about graphics and music. At least NEC tried and delivered a rail shooter with reasonable punch, one that’s far from perfect but still fulfills the mission of providing cheap helicopter fun.


The adventure starts in the city
(courtesy of YouTube user Encyclopegames)

With no story whatsoever, Thunder Blade puts the player in control of an attack helicopter armed with a machinegun (button II) and missiles (button I). The machinegun targets whatever appears in front of the chopper, whereas missiles will explode and destroy whatever’s down below (they don’t trail the surface as in other home ports). Each stage starts with a vertical section where the top down view forces the helicopter to fire forward in a slanted direction, causing the regular gun to hit the ground at a fixed distance (movement and overall reach is also limited). The second half of the stage unfolds in a rail shooting environment, and once it’s over you return to the vertical orientation in order to face the boss, which is either a large plane or tank with multiple turret configurations. Only the last boss differs from this pattern, since it consists of a static fortress in the rail shooting section.

There are four stages in Thunder Blade. They’re pretty short, and this somehow mirrors the short duration of the arcade original. Graphical themes are city, caves, river and oil refinery. Each main BGM is used twice: the most iconic one is used for levels 1 and 3 and the other for levels 2 and 4. The scaling effect won't set anyone's world on fire, but it's decent for the hardware. While the first rail shooting level is rather tame and lacks obstacles other than buildings, later on you need to exercise your dodging abilities around spikes, pillars and pipes. With an initial life stock of 5 and no extra lives in sight, the couple of available continues are very welcome for practicing later stages. No power-ups or upgrades exist, but at least the machinegun comes implemented with autofire. I just don’t understand why the developer didn’t do that with missiles as well, so don't forget to turn on that turbo switch for button I. For great justice. :)

Surviving the odds in this game takes some practice. Although the inputs are simple and straightforward, with normal/reverse controls selectable at the start screen, this is another case where the player needs to work around a few quirks in the gameplay. One of them is the slow firing rate of the main gun in the rail shooting sections, which turns the act of hitting airborne enemies a chore. You can’t just react to what’s coming, instead you need to fire in advance while anticipating the approach of the enemy. If you don’t do this chances are you’ll collide against them and die. In that regard fast jets are worse than helicopters because they can easily pass through your firepower. The good news is that they always appear in the same places and formations, allowing for some minor advantage through memorization. 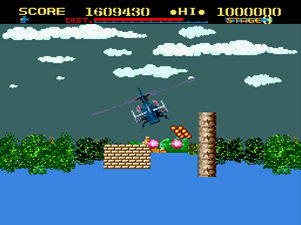 Another point of concern is bullet visibility during the first top-down boss confrontation. Dancing around bullets is a skill that develops naturally the more you play, but doing it against the spinning fire blasts of the first boss’s middle section is always a nightmare. Strangely so, bosses get increasingly easier level after level. Your hitbox is deceiving in the initial vertical parts, so don't get too close to enemy helicopters that are taking flight and reaching your altitude. Performing constant round movements is still one the best ways to survive a particular tricky part of a rail shooter segment, just be careful not to collide against anything. And if things start getting too cluttered just “land” and wait for the flying hazards to flee the screen as the TAKE OFF message urges you to return to battle.

Killing as many enemies as you can is the key to scoring higher in Thunder Blade. At the end of the level you are awarded with a special bonus that's directly proportional to the kill count. Less than 80 hits yields 100.000 points, 200.000 points are given for a kill count below 100 and above that you get 400.000 points. I wasn't able to hit more than 120 targets in a level, so I couldn't check if it's possible to get an even higher bonus. Unfortunately the only stage where you can safely try to maximize this bonus is the first one, since the others are either low on enemy count or just to difficult to hoard.

The picture below shows my 1CC high score on Normal for this port of Thunder Blade. It plays considerably different from its counterpart on the Master System, but it's equally fun for fans of old rail shooters. For those interested, ports of other Sega rail shooters also exist for the PC Engine, such as After Burner II and Space Harrier. 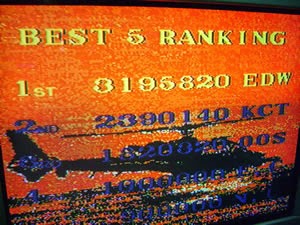