In this day and age the PC Engine is all but a footnote in video game history for many people. Real video game lovers, however, cannot help but appreciate it as one of the most charming classic platforms, and having a new shooter released 20 years after its demise is nothing short of outstanding. Developed by an independent little studio, Atlantean has recently hit the market in full retail form with case, manual and the game in a proper HuCard – or AbCard, as baptized by developer Aetherbyte. For all purposes it’s the result of a labor of love targeted at the hardcore fan base, like many other examples that came before it in recent years.

Atlantean doesn’t try anything new or groundbreaking, and at first glance could be mistaken as a pseudo-sequel to the universally pawned Deep Blue. Fortunately the only thing in common between both games is the underwater theme, with actual gameplay being vastly different between each other. The homebrew homage to Defender is clearly evident in Atlantean, and since there’s no game with an equivalent style in the PC Engine library we can all hail this as the first one of its kind for NEC’s video game console. Granted, it only took more than 20 years to happen, but now that it’s here I guess a few more people will get a taste of the old Defender gameplay rush. Then we can all go play Resogun and meditate on all that stands between and at the same time unites the PC Engine and the Playstation 4 in this regard.

Anyway, in Atlantean the player’s mission is to guard the underwater inhabitants of planet Atlantis from being abducted by Aquanoid robotic invaders for unspeakable purposes (never mind the fact that the bad guys look just like sea creatures from Earth and the inhabitants look like statues of Baby Sinclair). In order to fulfill the heroic task you’re allowed to shoot (button II), trigger screen-clearing bombs (button I) and move horizontally at hyperspeed (START). The play field is the expected vertical cylinder, the scrolling speed is dictated by the player and an overhead radar tells you the location of all enemies and also the atlanteans you’re supposed to protect from abduction. Turning left and right needs to take into consideration the ongoing combination of speed and inertia.

Each stage is comprised by five sections. In the first one you face three consecutive invader waves, in the second you’re brought to the middle of the screen in order to weave through the gaps of incoming mine walls and in the third part you face another invader wave. Then comes the stage “aqualord” boss, followed by a bonus section where you need to catch falling atlanteans for an opportunity to repopulate some of the inhabitants that were abducted or died. This bonus round is only absent in the 4th and last stage, since the game ends when the 4th aqualord is defeated. Besides the regular game you can also choose to play an “Endurance” mode that removes all bosses and supposedly has no ending. This is set in the options screen (note that the difficulty appears under the “speed” setting).

Survival play in Atlantean is quite easy. Extends come loosely at the ten thousand marks and extra bombs are added to the stock at key points, e.g. when a section is completed. Preventing atlanteans from being captured leads to slightly higher scores, I just couldn’t figure out a clear rule for how it works. Since the only type of enemy that’s capable of abducting atlanteans is the jellyfish, watch out for them and act preventively to stop them from taking their prey away. Even if you destroy the kidnapping jellyfish beware not to lose an atlantean by letting it fall from too high. However, a falling atlantean can be picked up, carried around and dropped safely anywhere you want at the bottom of the sea.

Sounds and graphics in Atlantean are fairly average for PC Engine standards. The complete lack of power-ups is a bit disappointing, but at least the core gameplay is enough to keep the interest going. Parallax layers are used throughout and may induce a little jerkiness (particularly in the mines section), while the colorful design feels samey and doesn’t allow any stage to stand out from the rest. There’s a wrecked Statue of Liberty somewhere in the game, but what’s it exactly doing in an alien planet? Jokes aside, while capable to deliver the goods, Atlantean fails to go beyond the basic level of accomplishment. On the whole, the only real downside in the actual gameplay is the considerable slowdown when you come across too many enemies at the same time, which briefly makes controls unresponsive and affects the firing/bombing functions. 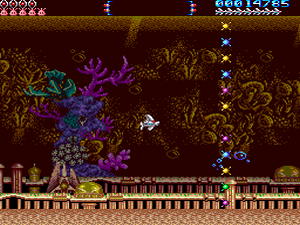 Mines on the third stage

On the surface the scoring system appears to be very straightforward, but as I mentioned above you’re bound to score a little higher if you manage to avoid the abduction of atlanteans. Every stage has 9 atlanteans to be protected, and the more of them you lose the less you’ll score in the end. It doesn’t matter whether you carry them around (by recovering them after they’re been lifted) or just let them lie peacefully at the bottom of the sea. If all atlanteans are killed in a level the scenery explodes and you're left to deal with only one type of enemy that approaches from the right in concentrated flocks. In order to return the enemy gallery back to normal you need to start repopulating the bottom of the sea by collecting falling atlanteans in the bonus area.

While attempting to achieve the highest possible score in the game I have come across a weird programming bug: the sudden cumulating of an obscene amount of lives (one for each enemy killed). It usually kicks in by the time I reach the third stage and it seems to be related to how successful I am at keeping atlanteans alive. At one time I even rolled over the life count. Unfortunately I wasn't able to top the highest score in the default ranking table, and unless there's a deeply hidden secret in Atlantean's gameplay I have the feeling it might be just impossible to accomplish that. What a downer, really... Well, at least there are different tables for Normal and Endurance modes.

In the last credit I played I was able to keep all atlanteans alive across all four levels, but nonetheless I couldn't even reach my best result, which is shown below with the yellow arrow. The game was played on Normal speed/difficulty. 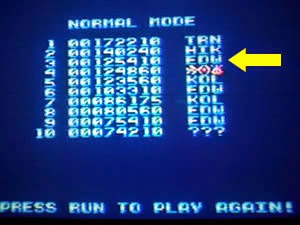