Ah, the appeal of war against intergalactic invaders! How could we, as shoot’em up fans, ever resist it? The publisher of Strike Gunner S.T.G came up with an extremely convoluted story just to tell you that but don’t worry, the animated intro is more than enough to show you everything that’s needed to, well… get you in the mood, I guess. It even includes a neat mode-7 effect that obviously isn’t present in the original attract mode of the arcade game. In the end it’s all about aliens attempting to conquer planet Earth in the year 2008, and scientists developing the Strike Gunner fighter to try and stop them.

Strike Gunner S.T.G on the SNES is a prime example of a shmup that hasn’t aged well at all. Originally a fast and frantic experience in its arcade form, the game was turned into a repetitive ordeal for the console format. Monotonous graphics, simplified enemies and increased stage duration are far from being an alluring combination in a 16-bit shooter. When I passed the first level for the first time I thought for a minute that I’d be stuck with that forest setting for the rest of the game! Anyway, the graphics did change but despite following the same stage progress originally presented in Raiden (first half of the game on Earth, second half in outer space) they lack color and overall it just feels you’re up against a gray-tinted alien army.

Maybe the reason for the subdued impression one gets when playing the game is the fact that the developer actually chose to focus on beefing up the simultaneous two-player mode, which seems to come with rather dynamic collaboration mechanics (check the instruction manual for specifics). Unfortunately I didn’t get to test that, nor do I know how faithful this part of the gameplay is when compared to the arcade original. I wonder if the SNES port would’ve been a better solo game if it had shunned the co-op thing. After all, it does add extra material such as five brand-new special weapons and new graphics: the sea stage is totally new, as well as the flight over the Moon in the 7th stage. Too bad the action is dull and boring for the most part.

Button B shoots and button A fires special weapons. Before starting each stage the player must select a special weapon to be used throughout the level, initially from a list of 15 available options. Each special weapon may be selected only once, so think wisely before choosing the plasma shield, admittedly the best of the bunch. While the regular shot comes with unlimited ammo, special weapon usage is limited by an energy gauge, and the rate at which this gauge depletes depends on the weapon itself. Autoaim vulcan and homing missile drain it slowly, whereas the megabeam cannon consumes it all in just one powerful single blast. Therefore, out of the 15 special weapons 7 will not be used during any normal run. Don't take too long to choose one: if the timer reaches zero the game will assign the uppermost special weapon for you.

To refill the energy gauge you need to collect one of the items brought by a carrier arriving from the bottom of the screen (a stealth plane, a space shuttle or a rocket container). Other items include speed-up and the power-up for the main shot. Now for the weird news: item management is one of the most bungled features of Strike Gunner S.T.G. For example, out of a total of three speed-ups in the entire game, the first one only appears in stage 5. When you take it for the first time you’re left wondering what just happened to the ship’s speed. In my opinion you get too fast with this single speed-up, and considering that all items look like each other avoiding the speed-up requires you to devise some sort of visual recognition based on the details of the item sprites.

According to the instruction manual the game comes with four difficulties. The option screen, however, shows five different numbered settings with the default being 1. In this setting the ship starts with pre-upgraded firepower, which I thought was strange. When set to difficulty 2 you get the basic pea shot that must be powered up nine times to be maxed out into a double blue shot with greater destructive effect. I figured difficulty 2 corresponds to Normal, so that was my chosen setting. By doing that the player must be aware that dying comes with a huge power loss, to which the only remedy in later levels is to select a relatively powerful special weapon as compensation because power-ups are extremely scarce. Just to have an idea, most stages after the first one have only one power-up to be collected. 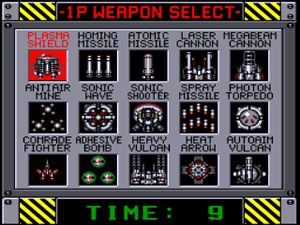 Megabeam cannon, sonic shooter, adhesive bomb, heavy vulcan and heat arrow can only be tried in the SNES version

Ordinary enemy behavior is the main culprit of the lack of appeal in Strike Gunner S.T.G. You'll be facing a long streak of choppers, tiny jets, boats, a handful of mid-bosses and weird creatures in the outer space levels. Pretty much all aerial foes arrive in mirrored patterns, so if a sequence of five choppers arrives from the left you can expect the same five arriving from the right. Most bosses were changed completely in the port and are often easier, but a couple of them are downright cheap in how they attack, killing you in a snap if you don't pay attention. Dying, by the way, happens with absolutely no fanfare and makes you feel like a toasted mosquito. Well, at least it recharges your special weapon at once... Slowdown is rare and more akin to brief frame drops when the screen is cluttered. And I might be wrong here, but I had the feeling that special weapons with lingering contact, such as the laser cannon, add more points to the score.

Moving the HUD to the sides of the screen seems to make a little sense for the 2-player mode, but otherwise it just feels awkward and useless. You can't even see your score while you're playing, and the only glimpses you'll have of it appear in-between levels (at least you're also allowed to check your high score in those same screens). Score-based extends start with 50.000 points and continue progressively on double values (100K, 200K, 400K, 800K, etc.). Sometimes you hear a characteristic sound when the extend registers, sometimes you don't. Speaking of sound, the music is probably the only aspect of the game that escapes being subpar, even though a few themes appear in more than one level. 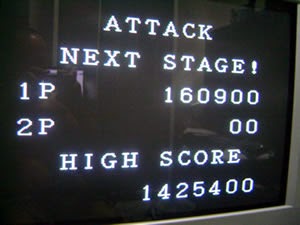