In Japan, the name of the game is Winds of Thunder. All other releases for different regions or consoles, including the Turbografx-CD in the West, came out as Lords of Thunder, which makes more sense in regards to the story involving a knight equipped with a magic sword and fighting hordes of hell commanded by fiendish leaders – or lords, if we want to have them in a classier fantasy designation. Almost like an RPG turned into a shooter, what we have here is an amusing adventure packed with tight action and great music, a roaring testimony to the quality of CD based games from the 16-bit generation.

Despite being frequently associated with Gate of Thunder, there is no relation whatsoever between that game and this one. In fact they couldn’t be more different, since one is a classic sci-fi spaceship shooter and the other a fireworks display of medieval flying action. They do share the same development team, but that’s about it as far as similarities go. Winds of Thunder is also more original and must have felt completely fresh back in 1993, unlike Gate of Thunder and its striking resemblance to Thunder Force III. A lengthy animated intro and a few cut scenes complete the package, adding greatly to the fantasy theme of Winds of Thunder.

For each of the selectable continents/stages the player must choose one out of four magical armors. Each armor comes with a different color and endows the brave knight with a specific weapon whose power and effectiveness varies: fire (spread shot → whipping flames), water (straight shot → two-way shot), wind (bolt shot → forward/diagonal bolts) and earth (thin shot with two-way exploding bombs). Contrary to popular belief, stages and weapons are not related in any way when you think about the elemental names of the armors, as in "selecting the fire armor to play the water or ice levels". In the end it’s all just a matter of choosing the weapons you feel more comfortable with. Button II shoots while button I triggers a bomb attack that changes according to the selected armor.

As you destroy enemies, several types of crystals will emerge and vanish after a while if you don’t pick them up. Blue and gold crystals add to the crystal count (5 and 10 points, respectively) that can be used to buy items and upgrades in the shop after selecting the armor. Magic gems add to the upgrade gauge above the life meter, thus determining the power of the weapon: those of the blue type add a single upgrade point, whereas the more rare red type provides a bulkier upgrade. In total there are two power levels beyond the default, each one requiring a certain amount of upgrade points to be reached. Finally, every once in a while a specific enemy will leave behind a heart that increases the amount of health. By all means try to keep this health bar in good shape, because once it depletes the game is sadly over.

Whenever you stand close enough to an enemy the regular shot will be replaced by a sword blow of short reach. This special melee attack is relatively strong, but beware of using it in crowded places (lost firepower from shooting) or against moving enemies (it’s easy to get hit). By getting hit you lose a portion of health, and most of the time this will also be followed by a downgrade of a full level in the weapon power. This means that in certain areas getting hit twice or three times in a row can be disastrous, since you’ll be left with low life and a weak, basic weapon. In order to prevent such situations the only real remedy is practice, but spending crystals in the shop can also help with that. It’s possible to buy varying amounts of health, extra firepower, bombs, shields and a precious resurrection potion that grants you a full life meter after you lose the initial one. These last three items, as well as continues (no need if you’re aiming for the 1CC), are the only ones that cannot be found in any way during the actual gameplay.

When you think about horizontal shooters it’s easy to realize that Winds of Thunder packs all the elements that make a shmupper’s heart tick in the right way. Colorful graphics, a rocking soundtrack full of guitar and bass, decent animation (the knight can even “walk” on flat surfaces), all sorts of environmental hazards, varying scrolling speeds, reasonable survival/challenge ratio, large bosses. Some of these bosses are quite demanding by the way, with tricky weak spots and the need for a good amount of dodging. The Auzal boss, for instance, will crush unaware players who’re not too fond of moving around. Exploding totems and moving spikes can be deadly as you reach the final stretch of the game, while a poorly selected armor might represent the difference between a relatively comfortable challenge and extremely dire conditions. 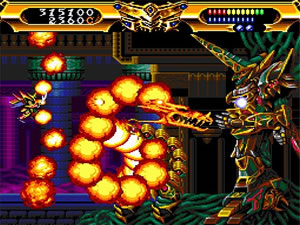 The lord of the Bosque continent

In the batch of influences that can be noticed here I definitely see hints of Rabio Lepus (close-range sword attack), Insector X (earth weapon, down to the sound effects) and Forgotten Worlds (boss entries, the shop gimmick and some of its items). Another aspect inherited from the latter is the conversion of leftover crystals in points as you beat the last boss. The amount collected will be multiplied by ×100, so the maximum possible bonus you can get is one million points for 10.000 crystals. Unfortunately the crystal counter is capped at this value, when in fact you could collect much more than that. Therefore there’s plenty of room to buy stuff in the shop without sacrificing this final bonus.

Besides the reward from crystals, another source of extra points is the collection of upgrade items (magic gems) when the power bar is completely full. Each one is worth 500 points, a neat compensation and nice motivator for flawless play. Quite simple and fun, something lots of shooters seem to take for granted.

Winds of Thunder is often compared to the port released for the Sega CD two years later. I’ll refrain from drawing any conclusions until I try the Sega CD version, which I expect to do soon. In the PC Engine CD my choice of armor was the earth type, for its sheer power and great side coverage (after a few credits I decided to use it exclusively). You can try to pause as soon as the final boss goes down to take a look at the score, but if you lose the aftermath explosion don't worry. Just let the end credits scroll and wait for the attract mode to check your high score. Below is my final 1CC result: 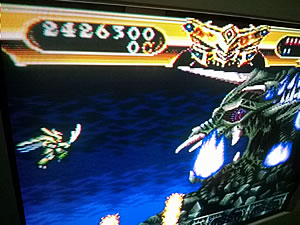