Returning my attention back to Gradius II after being exposed to Gradius III has a few clear advantages, such as putting its difficulty into the correct perspective within the series. It felt much easier this time around when compared to the occasion I played Gradius II on the Sega Saturn. Sure, by then I had approached the game in completely dire conditions – or, to put it in other words, in truly arcade-like fashion (bar the arcade cabinet, of course). It was just me and the game, no MAME save states, checkpoints in final levels learned the hard way. The good news is that I learned a lot from doing it, something that helped me cope with the higher stakes of the sequels.

Savoring the second chapter again on the Playstation felt like going home. The Gradius Deluxe Pack on Sony’s 32-bit console is exactly the same as the homonymous compilation released for the Sega Saturn, presenting both Gradius and Gradius II in a neat package that brings the arcade experience home. Going from the first game directly into the sequel is enough for anyone to understand the remarkable leap in terms of quality that Konami was able to come up with, and that’s another reason why this particular disc is so precious for those willing to have a piece of arcade shooting history in their collections. 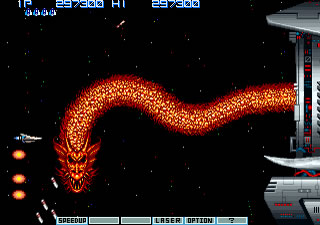 An outcast from Salamander

Stepping into the world of Gradius II should be easy if you enjoyed the first game in the series. By doing so you’ll be immersed in an adventure that takes what made Gradius so classy and beefs it up with several upgrades, from graphics to sound, from weapons to difficulty. Backgrounds are much more than star-filled horizons, with an increased weapon variety that smartly incorporates what was done on the spin-off Salamander series. It’s here that some Gradius staples appear for the first time, such as the high speed stage, the boss rush (with several bosses from Salamander) and the indestructible mechanical beast in the last stage.

Never mind the checkpoints. Don’t even get angry at the checkpoints. Accept their inevitability as part of the experience and watch as the anger factor fades accordingly. Knowing that with each death you’re forced to restart a section with a crawling spaceship can be cruel, but it’s also a great motivator for you to refine your strategy to the standards required by the game. Managing power-up capsules and the upgrade process goes hand in hand with terrain navigation and macro dodging. I prefer to have only two buttons configured, one with rapid fire for both shot and missiles and another for power-up activation (× and R1, respectively), but it’s also possible to have separate buttons without any autofire function.

Each power-up capsule taken lights up one slot in the weapon array. Select the desired upgrade by pushing the upgrade button. Behold as the Vic Viper abandons its sluggish navigating capability with the speed-up upgrade, acquires an excellent destruction aid with missiles and increases its firepower with the glowing orbs known as options. Get lasers or ripple lasers and double (45º) or tailgun shot upgrades. And increase the hull’s endurance with the shield (frontal protection against a good number of hits) or the force field (capable of withstanding damage from three bullets). Players must choose between four weapon configurations and select one of the shielding alternatives.

What changed from my previous experience with Gradius II on the Saturn and this round on the Playstation? As a starting point, I adopted two speed-ups instead of only one. Being faster demanded more precise maneuvering, but I now think it’s better in the long run. I went with ship type 3 for the ripple lasers, not exactly because they’re stronger or anything but because they’re different. And this time around I also caved in and used MAME to save-state the high speed level and the last stage, which made practicing a lot less stressful. Compared to the first chapter, it's visibly harder to recover from death in Gradius II, especially on the third (crystals) and the last (fortress) levels. The extend routine is 20.000 points for the first one, with all further extra lives gained at every 150.000 points.

The tweaks that matter here are button mapping (mentioned above) and the ability to turn off the emulated arcade slowdown (set wait control to OFF). Choosing between Arcade and Full screen ratio feels pointless since it's just a matter of minor image cramping on the sides of the screen. High score saving is available, but the port would shine even more if it had an option to start directly on the second loop (if you managed to complete the game, at least).

As far as arcade chapters are concerned, I know people who think this entry is the best in the series. I can surely relate to that since Gradius II still stands as a fun blaster despite the checkpoints. I was able to reach stage 2-1 in the highest score below, playing with ship type 3, force field and wait control OFF. 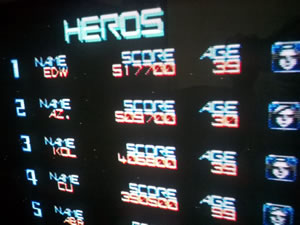