Following the good reception experienced by Taito with RayForce a couple of years prior, the company released the sequel RayStorm to great expectations. On the outside it represents a remarkable departure from the first game, since it uses 3D technology to render everything and comes presented in a vertizontal aspect (a vertical shooter on a 4:3 standard screen). Built and designed on polygons, the trademark gameplay involving traditional shooting and lock-ons is back with a slightly tilted perspective, a beefed-up scoring system and a more vicious challenge.

A brief note on the different regional versions of RayStorm for the Playstation: although exactly similar to its Japanese counterpart published by Taito, the North American disc published by Working Designs locks the default difficulty of the game at setting 5, which is 2 steps above the original default setting. Any difficulty lower than 5 cuts the game short at the fourth stage, so in order to see the whole game players are forced to start the credit at a higher difficulty. This is the reason why I decided to go for the Japanese release when I returned to the game a couple of months ago, and also why I recommend this to anyone who wants to have a less painful go at the Playstation port (I don’t know how the European version stands in comparison).

Dear readers, I know what some of you might be thinking. But I assure you all it's not a matter of chickening out and going for the “easier” version. RayStorm is pure evil and makes no concessions. The game is fun, has plenty of spectacle and comes with a nice varied soundtrack (an arrange version is included too), but it's also extremely unforgiving. In my opinion a good deal harder than RayForce, and people who say otherwise probably never took to themselves the task of beating it on a single credit. I gave up on it once and only got back to the game when I had a working PS1 emulator to practice. 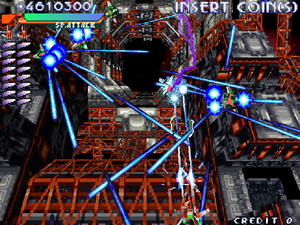 Red R-Gray 2 is in deep trouble

The Playstation port of RayStorm offers two modes of play: Arcade and Extra. As its name implies, Arcade mode is a straight take on the arcade game, while Extra mode (or RayStorm Extra Edition) presents a similar experience albeit with new enemies, new bullet patterns, different colors, new visual effects and a different ending to the story happening in the 23rd century. Basic gameplay doesn't vary between modes though, as it all starts by choosing between two ships: the R-Gray 1 fires a vulcan shot with mild spread capability and a maximum of 8 lock-on lasers, whereas the R-Gray 2 fires a thin twin laser and a maximum of 16 lock-on lightning rays capable of "travelling" from one target to the next. You must also select Manual or Auto lock-on type: on Manual there are different buttons for shot and laser, on Auto both commands are mapped to the same button.

As was the case with the first game, locking on to multiple enemies is the secret to getting higher scores. Each successive lock-on doubles the multiplier applied on the enemy's base value, which means huge points can be gained by cleverly devised lock-on strategies. However, RayStorm takes a step further by allowing players to lock on to all enemies regardless of their standing layer/height (you couldn’t lock on to enemies at the same level of the ship in RayForce). This adds a whole new dimension to the risk-reward ratio, likewise boosting the rage factor that comes with it if you’re the kind of player who prefers to engage in scoring rather than survival.

Crystals released by red-colored enemies add to the ship’s power and lock-on arsenal. The main shot receives an upgrade for every three red crystals or a single yellow crystal collected, whereas each green crystal increases the maximum possible lock-ons by one. Dying strips you off a single level of both firepower and lock-on. On the other hand, when these resources are maxed out all items start giving points, eventually maxing out at 10.000 points each. Bombing is done by pressing both buttons at once (Manual) or the second input button (Auto), dropping a massive shower of explosions onto the screen provided the bomb energy bar is full (it's always full with each new life). After triggering the bomb, filling up the gauge is accomplished by using lock-on attacks.

Regardless of your current lock-on capacity, if you manage to place them all over a single target the result will be a localized and much more powerful blast. At full power these viole(n)t lock-on attacks can break complete parts of bosses. Boss parts, by the way, add to the end-of-stage bonus related to enemy destruction, so if you want to get 100% on that and 500.000 points be sure to kill everything in the level and completely dismantle the boss. The other bonus you get after beating the boss is lock-on shootdown, which relates to how effectively you're able to use your lock-ons. And again, the way you finish a boss is important because you need to dispatch those beasts with a lock-on to get 100% and another half million points.

Taking down Juda Central Core on a single credit

On all accounts, RayStorm is a beautiful game to look at. It’s got an incredible amount of shmup flair, all sorts of visual effects and explosions and it never slows down unless you’re bombing or being bombarded by the fiercest attacks from some of the bosses. The first three levels take place on Earth, the next two sees your ship being catapulted to outer space and the rest of the game puts the player against the alien armada in their own evil base. Each level is a challenge in itself, with varied terrains and enemy arrangements that only get more intricate the further you advance without dying. Rank is still something to be considered in the long run, especially when you realize that RayStorm has no extends of any kind. Die and watch as enemy bullet speed decreases instantly, followed by a similar breather in enemy/bullet density.

A further realization that took me a lot of time to adapt to is the absolutely organic nature of the challenge in this game. No matter how much you know the behavior of a particular enemy wave or how familiar you are with the attack patterns of a boss, no credit will ever be like the next one. Everything in RayStorm responds to your actual location and movement, so it’s not just a matter of dealing with aimed shots and bullet spreads. It’s as if the whole game was aimed at you. And the fact that the ship is almost always drifting towards the center of the screen by itself is an aspect that defies everything about the traditional approach in a shmup. Long story short, standing still is the fastest way to die horribly. So watch out for stray bullets, be on your guard, always be on the move and don’t underestimate even the tiniest cannon fodder coming up from below.

Regarding scoring, it doesn't take too much effort to see that R-Gray 2 is a better choice than R-Gray 1. After all, the travelling laser allows completely different lock-on paths with 8 more possible targets. Lock-on success requires good synch with enemy recharge routines, as well as figuring out point-blank safe zones and clean gaps between layers. It all boils down to finding the rhythm of the game, I’d say. As for ways to power up quicker, a single trick to get to 16 lock-ons faster for R-Gray 2 is to dispatch the giant snakes at the start of stage 2 as quick as you can in order to trigger additional waves of those little ships coming from the sides of the screen. By doing that you might even start the bulk of the level with maxed out lock-ons – or at least with only one still missing.

As far as presentation goes, the Japanese port of RayStorm is fantastic. Besides the rearranged Extra mode, it offers everything we've come to expect from a port (input configuration, automatic saving, sound test), as well as a few nice specials. Finishing a game mode unlocks its respective stage select, while finishing both modes (continues allowed) unlocks a special "13 players" mode. When available, all these extra features must be enabled in the configuration window of the main menu option screen. In 13 Players you get the chance to pilot all variarions of R-Gray 1/2 in Manual/Auto, finishing the credit with prototype ship R-Gray 0 (you can also tinker with ship type order if desired). This special mode is activated simply by setting your ship stock at 13.

I managed to 1CC the game in Arcade mode using R-Gray 2 on the player 2 side (blue ship / player 1 side always pilots a red ship), with difficulty set to level 3 throughout (unlike any other game I’ve ever seen, the difficulty level in RayStorm can be set for every single stage). In line with the previous port released for the platform, the Sega Saturn counterpart is named Layer Section II and is reportedly inferior to the Playstation disc. However, it does allow players to choose prototype ship R-Gray 0 in regular credits. The next game in the trilogy, RayCrisis, is actually a prequel storywise. 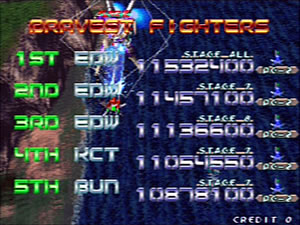