At the height of the 16-bit video game wars, both Sega and Nintendo were at full throttle trying to cater to each company’s avid fanbase. With an enhancer chip that allowed the processing of incredible polygonal graphics, Star Fox certainly left its mark in video game history as one of the most impressive punches thrown by Nintendo against the competition. And as a Segaphile myself I was forced to temporarily throw in the towel in order to (happily) enjoy this amazing rail shooter. Later on Sega would bounce back with their own enhancer chip, which produced an equally impressive experience albeit in a different genre with Virtua Racing.

That said, to this day I believe Star Fox (released in Europe as Star Wing) is one of the most immersive video games I’ve ever had the pleasure to play. All rail shooters share immersion as a functional trait, but here it reaches a point where graphics, gameplay and music unite in order to create something unique. The only aspect that might look dated today is also what gives the game its undeniable charm: the blocky geometry of obstacles and the aspect of folded paper with which ships and enemies are rendered. The action is intense and supported by a gallery of anthropomorphic characters that interact a lot throughout the journey, in another story of good against evil that can be played across three different paths.

Players take the role of Fox McCloud, the captain of the Star Fox team. Aided by Falco, Peppy and Slippy (an avian creature, a rabbit and a toad, respectively), Fox departs from planet Corneria with the mission to stop an evil villain called Andross in the distant planet Venom. Brief cinematics precede, take over at specific points and give closure to their quest, with lots of style and an awesome sense of scope.

When you press start you need to select your control scheme out of 4 options, as well as decide if you want to go straight to the game itself or if you want to play a training course that teaches you how to control the ship (it's always good to practice a little in order to get the hang of how things work when starting out). I've always felt more comfortable with the type A configuration, which works with reverse verticals and has the following inputs: Y = shot, A = bomb, X = brief boost, B = brief brake/deceleration (check the lower right gauge for boost/brake intensity), L/R = tilt left/right (tap quickly to perform barrel rolls). I think this setup is very intuitive and makes great use of the SNES controller.

In Star Fox there are no extra difficulty settings, instead we must decide on which route to play the game. All three start and end on the same planets, occasionally sharing enemies and environments while providing distinct challenges. Level 1 is the easiest and Level 3 is the hardest and longest course with one more stage than the others. All stages share the same structure, with a boss waiting at the end and the possibility to shift between three viewpoints with the SELECT button: standard, approach and cockpit. When in approach the ship is viewed at a closer rear view, whereas cockpit puts you inside it but is only available during outer space levels. Frankly I never use the cockpit view because I like to see my vessel from afar in true rail shooter fashion.

Each life gives the player a shield bar that allows the ship to withstand damage from collisions and enemy bullets, with death only happening when this bar is depleted. The most common pick-up in the item gallery is a revolving ring that refills part of your energy and is often released by killing specific foes. A stationary blue ring not only refills more energy, but also serves as a checkpoint. Then there are the blaster upgrades (first one gives you double shot, second one turns it into a plasma double shot), a shield (three basic hits or less, depending on the density of the obstacle you crush into), extra bombs and extra ship (to get it you need to shoot all three corners of the triangle, which starts to spin once the first one is hit). Bomb usage requires aiming, that's why a bomb that's dropped while the ship is pointing up will be practically wasted. The maximum amount of bombs you can carry at any time is five. If one of the ship's wings gets damaged you'll lose it, and the only way to repair it without losing a life is by collecting a blaster upgrade.

As one of the most impressive rail shooters of its generation, Star Fox flows at an almost perfect pace, scrolling by gracefully while throwing all sorts of obstacles and enemies towards the player. The game conveys depth successfully, and even though textures lack finesse and detail they certainly excel at the use of color and shading. Ship control feels natural and fluid, never mind the few bouts of slowdown here and there. I do love the several rules you need to adhere to in certain stages in order to be successful, such as flying through all the arches to collect an item or going pacifist against the space stingrays of Sector Y (stage 4 in Level 2). There will be times, however, where it’s virtually impossible not to get hit, and while trying to find the best path to dodge things you’ll often rely on pure luck to get through. The worst passage is the storm of stray bars prior to the 4th boss in Level/course 3. 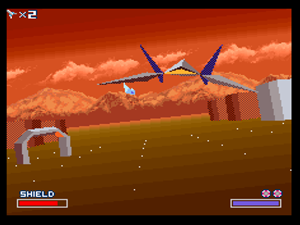 Star Fox has a lot going on with regards to gameplay, but the interactions between protagonist Fox and his wingmen surely add a special flavor to the action. Each pilot has his own life bar, and once this bar is depleted the character is also gone for good. They tend to cruise the screen while chasing or being chased by an enemy, some will ask for assistance and others will rant against it if you decide to help them. Apparently you can’t damage their ships when you hit them by accident, so fire away even if they decide to obnoxiously stand in the way (this happens often). Not that the scoring system here is deep and gets hurt by it, but having a wingman die is detrimental to the stage completion percentage because the few enemies they chase will be missing from the tallying.

There's no actual score display for Star Fox in the common sense. Score is based on destruction ratio and maxes out at 10.000 points per level, which corresponds to 100% completion. So theoretically the highest achievable score is 70.000 points in Level 3. Extra credits are gained with 10K, 30K and 50K, and definitely help a lot when you're learning how to approach the later stages. Speaking of which, the briefing message from the captain prior to each mission might give important clues about what to do to succeed, so don't be hasty and read them at least once. Boss battles are often intense, diverse and fun, with a few exceptions where hit detection becomes an issue (stage 3-6). Beyond the basics there are still two hidden areas accessed at stages 1-2 (Black Hole) or 3-2 (Out of This Dimension), but they work more as easter egg novelties than anything.

Of all aspects of this incredibly fun game, my favorite one is probably the music. It's a magnificent work of art, full of pumping, atmospheric and eerie compositions that put to shame most sci-fi film soundtracks. There are those who seem to dislike Star Fox for its supposedly slow frame rate, but they forget to analyze that everything about the game works incredibly well thanks to the way the control scheme works. In my humble opinion it took the foundations of this subgenre and infused it with pure awesomeness, to the point where many people still consider it the best game in a series that also saw entries for the Nintendo 64, the GameCube and the Nintendo DS. Others insist on comparing Star Fox to Silpheed, ignoring the fact that the gameplay of both titles is vastly different from each other (the only thing they have in common is the use of polygons).

I don't remember if I actually did it back in the day, but this time I 1CCed all three courses in Star Fox. Level 1 is indeed an easy ride, I don't think I ever boosted or braked the ship there, but boosting and braking are of utmost importance in Levels 2 and 3. Below is my final result for Level 3 (the game halts at this screen indefinitely until you reset the console). 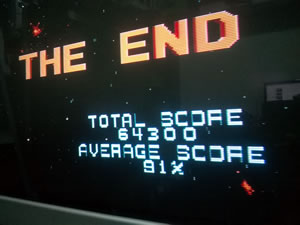 Note: a special competition cartridge for Star Fox with a heavily tweaked game was released and contains a full fledged scoring system, but that's a whole different story. A direct sequel for the SNES was planned and partially developed, but eventually got canned.
Posted by Edward at 1:28 AM