The FM Towns was never a mainstream computer, nor was the FM Towns Marty, its equally obscure consolized version. Owning one of them is already proof of how much people are capable of cherishing video game collecting, but going after the games can be an even more challenging quest. With a few exceptions they tend to be rare, expensive and above all not language-friendly (unless we’re talking about shmups, of course). On the far end of the rarity spectrum are games like Ku2++, which are so scarce and collector-protected that only surface on the market when Earth aligns with Saturn and Pluto. I happened to be there when one of these events took place, luck and everything else included since I was even able to bypass the ridiculous price these games command these days.

Released for the Sharp X68000 computer as Ku2, the title was soon ported to the FM Towns as Ku2++, down to the way both games on the disc behave. Wait, two games? Yes, Ku2++ actually comes with two completely different games that besides being verticals have only one aspect in common: the presence of a leeching parasite that flies alongside the player and is able to swallow enemy ships to unleash a devastating attack. Having two games on one disc is probably where the double plus in the title comes from, whereas “KU” is supposed to be the name of the alien leech.

As soon as the disc is booted you must select between Scerious [sic] and Comical mode, a choice that can only be reverted by resetting the console. Scerious mode is your classic sci-fi shooter, complete with an extremely convoluted story fully narrated in English/Engrish. Comical mode, on the other hand, is a cute’em up narrated in Japanese with a foolish, exaggerated kusoge style. 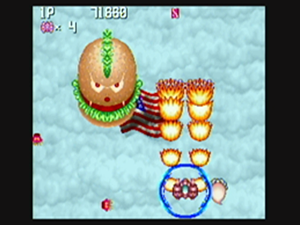 Comical mode: the American dream ends in hamburguer rage over the clouds

The long intro for Scerious mode introduces a character named Wayne Shadowick, the heroic pilot of the XF-33V/U001, an advanced spaceship equipped with two of those leeching maggots that fly beside it all the time. The XF-33V/U001 is the last hope of mankind against an evil alien threat called Soridum, and must travel across eight areas plagued by all sorts of enemies, both mechanical and biological. Button B shoots and button A fires the energy accumulated inside the KUs, which change color when absorbing enemies. A pulsating green tint means they’ve soaked the maximum amount of energy, whose blast upon hitting a target results in a big explosion with a skull figure inside – an obvious nod to Truxton. As expected, triggering the bomb with half-full KUs will result in less powerful blasts.

Prior to starting the credit it’s important to go to the options screen first. Besides turning on autofire, you can also choose from three weapon “packs” to be used in the game, each one allowing the ship to use three different weapons according to the letter-coded power up item that cycles as it leaves the screen. Pack 1 is the default and comes with M (homing missiles), L (laser) and V (spread vulcan). Pack 2 comes with M (multidirectional shot), R (ring shot) and H (straight + homing). Pack 3 consists of R (straight), W (winding spread) and P (bending spread). All weapons can be upgraded twice by collecting the same item successively, with speed-ups providing three additional levels of maneuverability (as seen in the overhead display). There are no shields of any kind, but the good news is that your maggot friends are able to absorb all bullets.

Although relatively quirky and strangely cool on the outside, Scerious mode (by all means the main game in Ku2++) is rather bland when it comes to graphics, and doesn’t flow at the frame rate you’d expect from a 32-bit console. Some weapons send the gameplay into a numb/dazed condition where you can’t fire without being affected by very mild slowdown, in a smaller scale than what can be seen in Thunder Spirits for the SNES (in a weird inversion of the norm when it comes down to shmups, homing weapons induce no such slowdown here). Flicker isn’t a problem, but bullet visibility does become an issue in certain areas. The scoring system is as basic as it gets, and sadly totally wastes the potential provided by the KU gimmick.

Since there are no continues or additional difficulty settings in place, the developer tried to address the challenge spikes by handing out extra lives like candy (one at every 80.000 points). The build-up in challenge is okay until you reach stage 6 (Ancient Temple), the hardest and most dangerous area, where all weapons seem to lack the firepower to deal with both ground and aerial enemies. The game gets more manageable afterwards, but remains quite intense and a lot more demanding in regards to the usage of KUs both for defense and offense. Also beware of walls with blurry borders and turrets that spit bullets right in your face. Throughout the journey dedicated shmup fans will certainly spot influences from other games in the genre: Salamander and Dragon Spirit seem to be the strongest sources of inspiration, but there are also echoes of Raiden and Star Soldier here and there. It’s just a bit disappointing that the result isn’t remarkable in any way whatsoever, except for a few pieces in the synth-based soundtrack. The theme that plays on the Alien Ferociousness level is great, for instance.

And what about Comical mode? I doubt any serious shmupper will be able to play more than two full credits of this travesty. Blame it on the annoying Japanese narrator and the complete lack of challenge. Comical mode draws a lot from Twin Bee in graphics and overall tone, but the gameplay is just marginally better than Magic Girl on the Mega Drive, frame rate included. Instead of two KUs now there’s only one, following the ship around and swallowing whatever comes across its path. Weapons are restricted to three, a forward shot, spread bombs and a flamethrower, all of them activated and upgraded by collecting the appropriate icon that cycles with speed-ups and bounces around before disappearing.

What makes this mode so easy is the same extend routine of one extra life with every 80.000 points and the additional assortment of 1UPs you’re able to pick up. On top of that, an icon that appears every 30 seconds and looks like a fireball endows the ship with a shield barrier that can withstand a good number of hits. Frankly, if you don’t die by boredom after a while you’ll only know your first death when a few enemies start coming from below at the end of the third stage. Bosses are a joke and might surrender instantly when hit by the KU bomb, which at medium or full power materializes as a giant fly swatter. It’s quite fun to do it, too bad it becomes almost impossible to feed the KU parasite once you get all possible speed-ups. Not that it really matters, but you can adjust the speed of the KU in the options between low/middle/high.

With just five stages, Comical mode offers a bit more in the way of scoring, given the fact that every surplus power-up gives you some extra points. The poor gameplay and the astounding lack of challenge hurt it bad though, and the inability to skip that retarded ending to finally see your score forced me to endure one of the most annoying things ever in a video game. Twice.

Pausing in both games lets you turn autofire OFF/ON (button B) and alter other options that don't work at all (palet STOP/FLASH with button A and wait NORMAL/ZERO with ↑). I don't know what this “palet” thing is, but the ZERO wait function would've been nice if it even worked. I suppose these extra switches might have a purpose on a FM Towns computer. The pictures below show my best results on both game modes of Ku2++, with Scerious mode beaten using weapon pack 1. 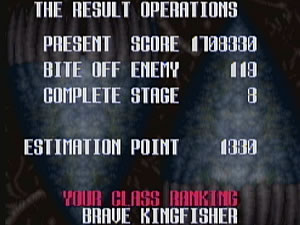 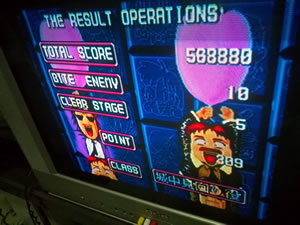