Going through the chronology of the Aleste series can be very confusing. Born on the MSX and the Master System, it never really followed a naming standard in the sequels. However, it's possible to recognize a legitimate entry in the series by checking out the core gameplay, which stays the same despite the change in identity and theme across some of its chapters. Both games released for the Mega Drive, for example, represent a remarkable departure from the original spaceship motif since they adopt a strong steampunk mechanized influence. The first one, MUSHA (or MUSHA Aleste), is still regarded as one of the best shmups on the system, but what of its sequel Robo Aleste, also named Dennin Aleste in Japan?

Storywise Robo Aleste has little in common with MUSHA, since it's a prequel that happens in ancient Japan. The long intro shows how a feudal rivalry gets altered when a giant mecha called Aleste falls in the hands of a particular clan. The game mixes that with a dispute involving brothers on opposite sides of the fight, fleshing it out with further cut scenes and providing some depth for those who enjoy this particular aspect of the game design. Of course all the intermissions with full English narration (most of it quite wooden) and the excellent CD soundtrack are there to showcase the capabilities of the Sega CD add-on. Fortunately for us shmup fans, the game itself is in every way a step-up above MUSHA since it's equally intense yet more dynamic, visually more polished and a good notch harder.

As a whole Robo Aleste is excellent, and just like MUSHA it never slows down or breaks up graphically. The visual bit I like the most is the new look of the flying robot. It's sleek and elegant, and doesn't remind me of a beetle this time around.

At its default power level, Aleste fires only two streams of the straight kunai shot with button B. In order to increase its power and reach you need to collect "power" chips brought by waves of harmless carriers that enter the screen in Galaga-like fashion. Another type of friendly carrier brings a colored power-up that activates Aleste's shoulder attachments and provide the bulk of the firepower you'll need to get through the game. These weapons are coded in green (spread of shuriken-shaped shots), yellow (attachments rotate and home on nearby enemies/bullets), blue (pulsating lasers) and orange (exploding cluster bombs). To increase their firepower it's necessary to keep collecting the same item without switching to a different one.

Whenever a weapon icon is released it floats slowly towards the bottom of the screen, bounces and disappears on the top. Note that all of their carriers are preceded by a bird-like scout that zaps across the screen and indicates the side they're coming from, which is important for when you need to avoid an unwanted power-up. Button C allows you to toggle between eight settings of flying speed, while button A is used to quickly charge and send forward the shoulder attachments of the robot, a move that has no connection to any weapon and can be done at any time but rarely finds any practical purpose.

By sticking to a tight gameplay style and a cohesive enemy gallery, Robo Aleste delivers a great mix of challenge and fun. The most important departure from MUSHA is the 1-hit death, which sets you back a little on the straight shot but completely resets the firepower of the main weapon. At least the enemy aggression cuts off a little since rank is reduced upon death. Oh yes, this is a Compile shooter with rank!

Granted, Robo Aleste is never utterly hard, but it won't for any second allow players to rest their senses. Some levels seem easier than others, only to take you by surprise and eat away a few lives because you blinked. Blame it on the lightly colored bullet sprite, the inefficiency of some weapons (green and yellow aren't to be trusted, the first one because it's weak and the second because it refuses to work at times) and the unpredictable recharging routine of some bosses (there are several of them that shoot treacherous lonely bullets that often catch you off guard). Bosses can also be very deceiving since some of them will give in really fast, only to put up a longer fight on the next credit. Now for a deceiving trait: at first it took me a while to notice that normal bullets can be wiped out by Aleste's firepower, but that's not really something you can count on. When things heat up and enemy bullets get faster it's not uncommon to be shot in the face and die horribly. For what it's worth the two shoulder attachments can also block bullets, but it's very risky to rely on that when moving around and dodging stuff. 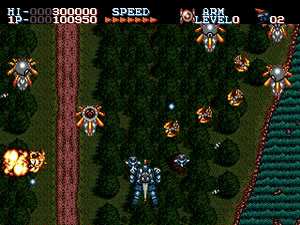 "In the name of Lord Nobunaga!"

Even with the quirks I pointed out in the previous paragraph this game is still in my opinion one of the highlights of the 16-bit shmup era. It's longer than the usual console shooter, has good pacing, shows lovely variety from start to finish and is really fun once you get the hang of it. Speaking about pace, the third stage does get criticized often for being a long stretch where you slowly dismantle a gigantic train over a snowy terrain. Indeed it's a long and easy section that's typical of Compile, but it's also full of waves of power chips that try to divert the player's attention (try dying there to see what happens). As for power-ups, I love when the weapon that spits little bombs all over the screen gets maxed out, it's really cool and can even surpass the laser in brute force if you manage to corner an enemy with it.

The only thing players need to know about the scoring system in Robo Aleste is that everything you can destroy or collect is worth something. As for survival, attention as you go around obstacles is important because lives can be lost if you get crushed by the scrolling effect. There are four score-based extends in total, gained at 100 thousand, 500 thousand, 1 million and 10 million points. After the credit is over continues can be activated from the start screen. Unfortunately the Omake options that appear when the game is beaten do not work on the US disc, and just freeze the game if you try to see what they do.

Robo Aleste is officially the last game in the Aleste series (Super Aleste / Space Megaforce came a year before on the SNES), and as such is one of the best signature mecha shmups from Compile. We do get to see an unexpected influence from R-Type in the final moments of the game, which is very cool (the baby aliens creeping in from all sides in the alternate dimension), but it's a bit unfortunate the company didn't continue investing in this particular STG branch. The unfulfilling ending to Robo Aleste is there because its consequences will further develop in MUSHA, however it would've been really interesting to see new iterations of mecha Aleste games for 32-bit video game systems.

While revisiting the game I was able to boost my previous 1CC score just a little bit on Normal difficulty. I had a great time doing it and here's the final result: 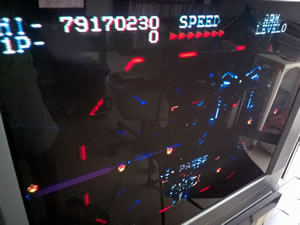