Even without actually playing the game, it's a given for everyone that Go! Benny! (or Corre Benny, the clumsy title in Spanish) was never supposed to be anything more than just another piss-poor, derivative scrolling shooter with little in the way of excitement. Or fun. As an obscure and pale shadow of other bug-themed shmups such as Taito's Insector X, Go! Benny! puts the player in the shoes of a bee that must battle insects and other wildlife animals in a game that goes from point A to point B in an absolutely stale rhythm. What else could one expect from another unlicensed game by Mega Soft / NTDEC anyway?

Only button B is used in Go! Benny!, but try to get a turbo controller if you're not a fan of button mashing. As the box art indicates Benny the bee goes about with a bow and arrow, that's why his shots resemble darts. From the single dart of his default condition Benny evolves to a four-dart spreading pattern once he takes two power-ups. Items are concealed inside beehive nests that float on screen and must be dismantled with your firepower. Besides P for power-ups you'll also come across S for speed-ups and 1UP for extra lives. It doesn't get more complicated than that. There's at least one extra life per level, and even though the counter shows only four lives it still keeps track of the extra ones you pick along the way. 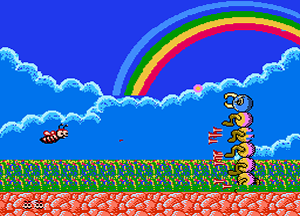 Happy bees and caterpillars after the rain

To be honest, the first impression I had of this game was not bad. Not much animation anywhere, but taking down butterflies and other bugs with fast-moving darts fits the bill nicely for a cheap NES shooter. Two or three speed-ups bring you up to a decent moving capability, dodging isn't too demanding and graphical themes follow some sort of natural logic with primitive parallax (garden, sunny rainbow day, mountain countryside, sunset, night time). The enemy gallery is marginally increased with each level won, with bosses consisting of larger creatures: a spider, a caterpillar, a deadly snail, a bat and a huge Parodius-inspired bird in the last stage.

Keeping it simple isn't a fault per se in any game. Simplicity can be blamed for an easy challenge / lack thereof or for low aesthetic standards, but never for bringing a game down on technical merits. Go! Benny! had all the ingredients to be a straightforward shooter of regular simplicity, but even this wasn't able for NTDEC to accomplish. As you fly up and down in your killing spree you'll inevitably come across instances where you'll die with no reason at all. You're just happily flying and then BAM! you're dead. It's as if the game wanted you to die no matter what. And depending where you stand you'll be too slow to overcome the next swarm of enemies, losing more lives right afterwards.

Speaking of dying, don't rush to get the items you want unless every cell in the honeycomb has been taken apart. If a single one is left and you touch it you'll die. Care must be taken with a specific enemy that might also come from behind, an ant that fires a single projectile that follows you around for some time before leaving the screen. Other than that, it's good practice to fly low and only go up when necessary, paying careful attention not to crash into slow-moving or spore-like bullets that often blend with the backgrounds.

Second to the crazy sudden deaths, another botched aspect of Go! Benny! is the scoring system. It's as straightforward as it gets, but that's not the problem. I can live with the fact that you don't see the score unless you advance from one level to the next or when the credit is over. However, high score buffering isn't well implemented since it seems that completion/1CC scores aren't computed correctly. During the couple of failed and full runs I did I noticed that one of my 1CC scores was much lower than the score I achieved right afterwards even though I bit the dust halfway into the final stage. Apparently all the points you get in the final level aren't added to the result of the clear.

Once the final boss is beaten players won't be treated to a proper ending. The victory song snippet plays and BAM! the game reverts back to the title screen. Benny does go (Benny corre) wherever he's supposed to go to destroy bouncing ants, snails, fireflies and flowers, but there is no special reward for him in the end. Nor for those brave or masochistic enough to get into his shoes.

Here's the high score I got after my final moments with the game: 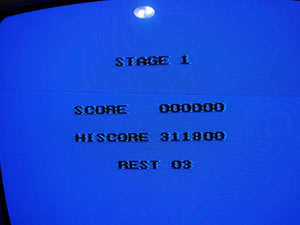