Of all classic shooter series that emerged during the 80s, Darius is by far my favorite. It's a little odd to explain why I feel this way about a game where you shoot space fish. Yes, FISH. Of course if you like shmups you already knew this, right?

Darius Plus was the first port of the awesome Darius arcade released in 1986, which was remarkable for having 3 screens combined to offer an incredibly large play field. Just try to imagine the impact this had on arcade goers at the time. As a home video game, however, I heard lots of people complain about how the title was cramped and had lost its charm - "if it ever had any to start with". I think these comments are preposterous for a number of reasons, and I stick my head out there to defend the game as a true classic. After all, it established a style of its own regarding graphics, design and music, with an uniqueness seldomly achieved by other contemporary shooters. Maybe that's why enjoying the Darius games comes down to a matter of taste, no matter how well or badly crafted people think they are.

I have already praised the series when I wrote about Sagaia (Darius II). Strangely enough, that's where I got my introduction to the world of Darius, and only recently was I able to play the first game, the one that started it all. From what I heard, Darius Plus has some differences from the arcade original, such as new original bosses and the elimination of the checkpoint system. The alphabet branching design was preserved and offers 7 stages of steadily screasing difficulty, in such a way that you must strive for a one life clear - losing a life when you're about to have the ship upgraded to the next level of main shot, bombs or shield is nothing less than frustrating. 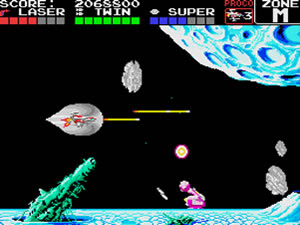 In Darius, enemies always arrive in wave patterns. It's a trademark of the series, and killing all enemies in a single wave will add extra points to your score. Since Darius Plus was the first one, general gameplay is rather straightforward. The rule of thumb is to shoot everything and be smart to get the colored power-up orbs, because sometimes they just fly off the screen! Power-ups are released by colored enemies and come in 3 types: red is for main shot, green is for bombs and blue is for shield. It is necessary to get 8 power-ups for each one to upgrade to the next corresponding level, and dying when you have 7 power-ups and are about to get the last one sends you back to the start power-up in that level. There are also special orbs released when certain areas of the terrain are hit: the yellow orb kills everything on screen and nullifies bullets, and the white one provides extra points (though they are random and range from 50 to more than 50.000 points - it's a lottery!). Occasional 1UPs will also appear when shooting special parts of the scenery. No extends are given based on score.

Graphic parallax uses just one layer, but this single layer is always effective. However, one of the gripes one might have with Darius Plus is the repetition of graphics throughout the game. Later stages use the same backgrounds from earlier stages, with the intention to show different scenarios just by slightly altering the color palette. Considering the fact that the stages themselves are comprised of repeating sections, this does make the game feel as an out of the mill effort from Taito. But that's when the music and the enemy design comes into the equation, elevating the game above the level of average and giving it the special flavor it is well known for. The music, although also being reused towards the end, represents really well the other-worldly fish environments with its weird, unconventional and inexplicably pleasing (to my ears at least) compositions. As for the bosses, they are all very big, and are always announced by the now classic message "WARNING - A HUGE BATTLESHIP x IS APPROACHING FAST". Darius Plus is special in that all bosses are named and stage-referenced as well (like "Big Rajarnn-D", for instance, meaning the big boss from the D stage). Here's a word of advice: never stand on the screen centerline after killing a boss - choose one side or you'll crash into the dividing wall! 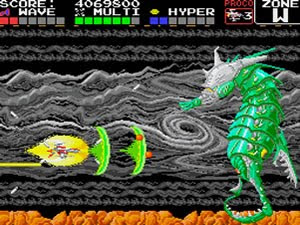 Silver Hawk is the name of the main ship, and even in this first incarnation and without any animation frames while moving it is still a very imposing spaceship. The shield in this game is raw, thick and seems to be sparking electricity all over its borders. Its beauty is simply unmatched in the shmup world, and besides all other great features in the Darius series it's probably the main reason why I truly love to play or see any Darius game footage. Gosh, I'll never get tired of saying this...

The challenge in Darius Plus is fairly decent. The branching system can lead you to tricky stages, and while the game seems to start on the easiest of settings, it does get difficult towards the end. I stuck to the top path this time (ABDGKPZ) and achieved a no miss high score. Note: the existing Super Darius title for the PC Engine CD shares the same memory save information with Darius Plus! They're not exactly the same game though, since there are different bosses for each in some stages - I wonder if the scoring is the same? Anyway, I had to erase the data before playing and recording the table below for posterity. 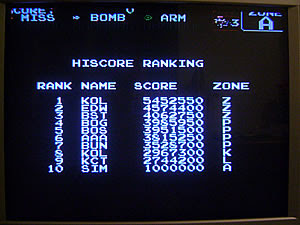