In an attempt to jump in the bandwagon success of Hasbro’s Transformers, one of the first games Sega published on card media for the Sega Mark-III in Japan was Astro Flash, later released in cartridge format with different titles all around the world. In North America and Europe it soon appeared as TransBot, but Tectoy would change its name again to Nuclear Creature a few years later for another release in Brazil. Answer quickly, which of these titles is the best for a Transformers-inspired game? Which one would lure you more vividly into playing a lackluster shooter that has an annoying power-up system and wears off faster than a seasonal McDonald’s snack?

Of special note is the ridiculous robot in the covers of all versions, which seems to be Optimus Prime’s poor cousin from outer space. The story to the game says that’s the robot form of starfighter CA-214, a powerful ship that has the ability to transform between spacecraft and robot with the aid of power-up icons. He’s forever doomed to patrol the surface and the undergrounds of a destroyed planet Earth in the far future, in an endless war against an artificial intelligence named Daluas. I don’t think Cybertron has anything to do with Daluas, and I advise shmuppers and Master System fans alike to give up on any positive expectations when putting their hands on Transbot.


A credit of Nuclear Creature
(courtesy of YouTube user J.C.)

Transbot’s gameplay revolves around killing endless waves of diverse ships and creatures as the screen scrolls and the background initially varies between three different landscapes, as well as destroying a particular enemy that serves as entry ticket to an underground base with a single boss awaiting at its end. Considering that these are actually two separate stages and that particular enemy requires very specific conditions to be killed, one can play the first level forever without ever knowing there’s a secondary area. And once this second level is done the game loops. Depending on how long you take to complete both stages you might need to see a few other loops to glance the whole of the enemy gallery. In a nutshell, if you finally come across an underground vertical laser barrier then you can consider you’ve seen all of TransBot.

An overhead display is reserved to show a series of alphabet letters, from A to G. A is the default condition of the CA-214 starfighter: ship form, default V shaped shot and unlimited ammo (button 2 shoots). By hitting a truck that comes from the left you release an orb that starts ascending, and by hitting it again the orb shifts to the left. When you take it the letter display starts cycling very fast from A to G, to which the player must press button 1 in order to choose the desired letter. Do it fast though, after four cycles the display settles at letter A and you lose the chance to select another one. Each letter has a defined function: B switches the weapon to a ring shot, C is a large vertical bar that disintegrates everything in its path, D is a single piercing shot, E is a short range 3-way gun, F is a two-directional weak shot and G refills both energy bars that control health (power) and weapon ammo (arm).

The limited nature of the ammo for all weapons except for the default is almost as annoying as the stupid roulette scheme, let alone the sluggish speed of the starfighter itself. Well, this speed is at least enough to weave around enemies and bullets without incurring in extra anger, even in the bulky robot form (C, E and F weapons). It doesn’t take long to get into the rhythm of the game though, and once this happens you realize that it takes a certain amount of destroyed enemies for the power-up truck to appear. By using ammo parsimoniously and successively activating the G upgrade it’s possible to keep the same weapon for a long while, but this takes a good timing skill.

In order to enter the underground area the player has to kill a single drone that crosses the screen after you’ve spent some time patrolling the planet. The only weapon that does this is the piercing shot (D), all others will make bullets ricochet from the enemy. 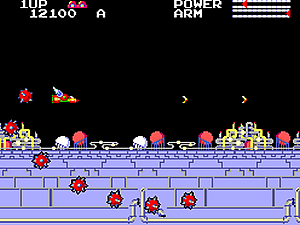 Flashing asteroids with a transforming robot

There are several other issues in TransBot besides the power-up system. One of the problems is that the game gets boring fast, no matter how much it mixes different waves or how many loops you complete. Since it’s not that hard of a challenge, concentration lapses are pretty much the only ways for a credit to end. For such a short game you can’t really expect much variation in the music, and the little there is isn’t anything to write home about. Scorewise there are no special considerations, with the exception that ramming into the power-up truck instead of destroying it results in 1.000 points. The first extend comes with 40.000 points, with further ones given with each 80.000 points afterwards. Since the game has no built-in autofire, I advise getting a rapid fire unit.

One last note: the more I learn about arcades and video games in general, the more I’m convinced that some of the most obscure arcade games in the 80s were produced by the once powerful Sega. TransBot is a rare case of a home video game that received a makeover for an arcade release (another one is Thunder Force III). The arcade revision of TransBot received four complete stages (surface + underground) and came with considerable changes in the gameplay. It was named Astro Flash in Japan and Transformer in the West.

I had as main objective in TransBot for the Master System to score at least one million points. In the picture below I’m fighting the underground boss in loop 7, just before giving up the credit.