As a gaming platform, the Neo Geo was the birthplace of many famous franchises and characters. It was also notable for a library formed by games designed almost solely by its own creator SNK. Neo Geo Heroes - Ultimate Shooting pays homage to their heritage by presenting a roster of ten handpicked characters from several Neo Geo titles battling each other in pure shmup fashion. The game was developed exclusively for the PSP and might be seen as either a sequel or a rearranged take on King of Fighters - Sky Stage, which hit the arcades and the Xbox Live Arcade service just a few months before the handheld release.

Even though it lacks the English translation for the main game story mode (which is available in the digital version), the retail Japanese edition at least keeps the English interface and is therefore totally friendly towards Western players. Amongst the different modes from the main menu there's even a port for King of Fighters - Sky Stage, so the disc actually bundles two games in a single package. The changes made on the Sky Stage version regarding game speed and difficulty are also extended to Neo Geo Heroes, in a porting/development job that properly adapts the bullet hell style to the handheld format. I just wish the framerate had been kept at 60 fps, but alas! It's fine as it is though.

The motive for all characters coming together to have fun flying and shooting stuff in Neo Geo Heroes - Ultimate Shooting is a guy named Dr. Brown, who uses a time machine to summon them from their timelines in order to defeat final boss Geegus (both characters from World of Heroes). Joining the ensemble of six fighters from Sky Stage (Iori, Kyo, Terry, Athena, Mai and Kula Diamond) we now have Iroha (from Samurai Shodown VI), Marco Rossi (from Metal Slug), Akari Ichijo (from Last Blade) and SYD-III (the ship from Armored Scrum Object / Alpha Mission, piloted by a cute silver-haired lady). Just like in the original game, the new characters all differ a lot in shooting styles and special moves. 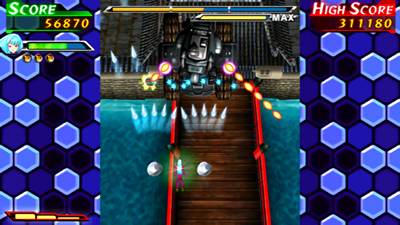 The 4-button gameplay works with shot, bomb, special move and provocation, all configurable as you please in the PSP button layout. Bombs are given for the credit, not for lives (meaning that you don't get a new bomb stock when losing a life). Each character can use three special moves defined by how long you charge the respective button: a single press results in a level 1 attack, with subsequent charging times resulting in a level 2 or level 3 (most powerful) special move. Once any of these moves is completed the corresponding gauge is automatically refilled for another use. You can't shoot when a special move or its charging is in effect, so take that in consideration in the heat of the battle.

With the exception of the scoring system, which is exactly the same as in KOF Sky Stage, Neo Geo Heroes changes things around a little bit, such as the way stages are organized. There are still five of them, but this time you must always choose the next one in a branching arrangement that grants several variations for levels/bosses and five distinct final stages with no loop (there's no invitation letter gimmick this time around). In Neo Geo Heroes you also know which boss you'll be facing prior to selecting the next stage. All bosses from KOF Sky Stage return in different parts of the game, which in general has shorter levels that reuse the enemy gallery of the original title in the most diverse ways. As usual, no ground targets are to be seen anywhere. The soundtrack recycles old themes while adding new ones to the mix, in a final result that's probably not as cohesive as in KOF Sky Stage but still decent nonetheless. There are times where it just lacks the punch of the original, such as the theme that plays in the stage tallying screen.

Now for scoring. Every destroyed target releases one or more medals whose value depends on how close you are to the enemy. Up close medals are worth 2.000 points, the next ones give either 1.000 or 500 points. They are also color-coded, which helps in identifying them even though they come labeled as "100 Mega" (red), "Neo" (yellow) and "Geo" (blue). Whenever you beat a level the medal count since the last time you got hit (in the level) is converted into extra points (red ×2.000, yellow ×1.000 and blue ×500). Whenever the provocation button is pressed the difficulty increases for a little while and all blue medals will come out yellow, thus increasing the scoring potential as far as medals are concerned.

The other important component of the scoring system is the chain/combo, a counter that increases if you manage to destroy enemies in succession with no more than approximately 3 seconds between each kill. As you enter a boss fight, the maximum combo you have since the last time you got hit is buffered in order to be multiplied by 2.000 points for the end-of-stage bonus.

Most of the initial fun of playing Neo Geo Heroes - Ultimate Shooting is in trying the different characters and seeing which ones adapt better to the player's style. That said, it's no wonder the silver-haired pilot of the SYD-III ship is at the foreground in the game cover. She's by far the best character to use thanks solely to her level 1 special move, which renders her invincible for a precious few seconds and allows her to ram into anything unscathed, bosses included. There are boss phases, for instance, that yield with just two of her "shield" attacks. At least the characters from the new roster are more balanced than the original six, except maybe for Iroha's stupid level 3 special move. Both Marco Rossi and Akari Ichijo possess nice attack/defense capabilitities.

Even though Neo Geo Heroes never reaches the difficulty of the original or even the port of KOF Sky Stage that's included in this disc, the game still packs a certain degree of challenge that varies according to the chosen character. Extra bombs are awarded at 2 million and then at every 4 million afterwards, and you might even run into a very rare extend item if you happen to be in your last life. The stakes can be daunting in the long run, but at least the branching stage layout provides a little more variety and replay value to the whole experience. Some great fan service can also be seen in the art design for the story and the panels that show character interactions.

Besides the main game in Story mode, the UMD also includes a special Challenge option with two variations: in Subject mode the chosen character must complete little challenges as the game unfolds, whereas Survival mode presents 3 ranks/routes (beginner, middle, higher) for you to play a boss rush. Co-op is available in Multi Play, as long as your friend brings his/her own PSP. Sky Stage mode gives access to the special port of King of Fighters - Sky Stage and Museum allows you to check art/music galleries and ranking tables for all applicable modes. Both Neo Geo Heroes and KOF Sky Stage have stage select and the possibility of activating an Infinity switch that makes you invincible while denying entries in the high score rankings. And if you fancy turning the PSP on its side a TATE display is also available.

My character of choice for Neo Geo Heroes - Ultimate Shooting was SYD-III. I beat the game on Normal by going through the upper route (1-2A-3A-4A-5A) and fighting Orochi Yashiro prior to final boss Geegus. Note that the restart function sends you back to the start of a level but doesn't reset the score, so be nice and don't rely on that to achieve a high score. 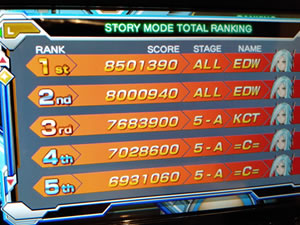