Have you ever wondered about how obscurity can hide cool games in plain sight? We can always blame it on their sources, as is the case with Seicross and developer Nichibutsu, which is mostly known by drab titles such as Moon Cresta and Terra Cresta. As a result, many shooter fans might have missed out on the tight arcade action of Sector Zone, which when ported to the NES had its name changed to Seicross.

I admit, on the outside Seicross isn't that much of a charmer. Blame it on the first impression of graphics (mostly dark scenery), music (not engaging at all) and controls (which feel kinda clunky on an initial contact, a sensation that's quickly forgotten once you get used to them). What Seicross does right, and that's often the reason why I appreciate any video game at its heart, is the nice challenge provided by decent gameplay rules and the continuous progression into more intricate levels and obstacles. That's why it ends up being an above average title no matter how you look at it. 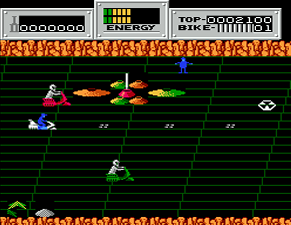 Gliding to glory, here I go

The mission of the player is to glide through the grid surface of Seicross avoiding obstacles and dueling against the incoming hoverbikers arriving from all sides. According to the manual, you're piloting a powered mini-bike in order to rescue your fellows who escaped the wrath of an enemy race in planet Colura. Never mind the fact that you look like a postman while your opponents all wear cool helmets. Postman duties were never easy anywhere I guess, especially when you're dropped from a top hatch into such a dangerous field as in Seicross.

You can fire with any button in the controller, preferably with some sort of turbofire function because the game does not have it by default. Special attention must be taken to how long you hold the fire button though, since the more you shoot the faster your energy fuel runs out – in fact, if you don't let go of the button chances are you'll die horribly before you get to the first batch of radioactive fuel canisters. That doesn't mean however that Seicross is any close to fuel-critical games like Scramble. Just keep your cool and shoot as necessary and you'll be fine, the firing rhythm of the game isn't that taxing anyway.

Enemy bikers will always try to ram into you, but they never shoot anything. The good news is that you can ram into them as well, sending them to their deaths against walls/obstacles and still winning points for it. Bullets will always come from stationary turrets and enemies coming from the front. Dodging them isn't that complicated, but it's very common to get cornered by a bullet spread. I remember most of my deaths being due to crashing against something as I tried to grab one of the items the game threw at me. Besides the fuel canisters and the stray blue hostages found in the wild, one of the most common ones is the star uncovered by destroying green trees, which are worth 1.000 points. Dinosaur fossils hide a "Pilpul" alien that's worth 5.000 points, so don't ever stop shooting if you come across one of these skeletons.

Dinosaurs actually seem to be one of the defining elements in the enemy gallery. Seicross doesn't have any bosses per se, but all even levels end with at least two large dinosaurs that uncover weird heads also worth 5.000 points. Interesting details: while odd-numbered levels scroll at a fast speed, even-numbered levels scroll at a slower speed and are often crowded with more obstacles with no enemy bikers at all. Some special items such as swords, clocks, a pair of boots and 1UPs appear when you hit stone-like shells that get pushed forwards (with the exception of the 1UP none of them does anything noteworthy). That said, the most important item you can get is the special "power" star that's released by destroying a radar buoy that looks like a clown's head. It triples your firing stream and allows it to get through obstacles. According to the instruction manual, if you fail to destroy the radar buoy the enemy's attack gets stronger.

When going for higher scores the most precious items are the hidden brain tokens worth 10.000 points each, which appear and quickly drift towards the right side of the screen when hitting a few determined enemies. Scoring is also important because it's the main source of extra lives, first at 30.000 points and then for every 50.000 points afterwards. Finally, each saved blue man since the last time you died is worth 1.000 points at the end of the level. As you can see, playing for score involves many variables, and even though marathon runs are possible due to the game's difficulty plateauing once it loops Seicross is far from being a piece of cake. After the 6th stage the game displays the message GET TO PET and starts over with no fanfarre or proper ending screen, but the loops are restricted to the neverending repetition of only stages 5 and 6. The sixth level is especially claustrophobic, with lots of traps and tight spaces to move through. Keep in mind that it's safe to hug the upper/lower borders of the screen.

If you're able to accept the terribly monotonous soundtrack, Seicross is certainly bound to provide some fun thanks to the sci-fi Tron-like ambience and the emphasis on dealing with obstacles, bullets and random bikers trying to push you against walls in fast scrolling stages. I must confess that my general expectations for this game were pleasantly exceeded. If you happen to like it perhaps you should also try its spiritual sequel Magmax. I haven't done it myself, so that's probably one of the next NES titles I'll be playing.

If I remember correctly, the run for the high score shown below ended in stage 7-2. 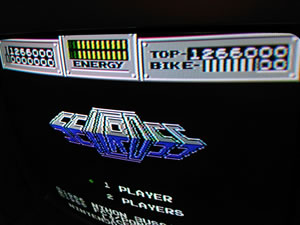