Very few arcade games can actually live up to the being called unique, and Atomic Robo-Kid is undoubtedly one of them. While the game didn't fare well critically or comercially, it did make a few appearances as ports in the console market. The PC Engine Japanese version, called Atomic Robo-Kid Special, is more of a rearranged game than a proper conversion since it changes many of the original gameplay elements. Even though they're not substantial, some of these changes actually make the game more friendly and less dire, on top of providing a slightly different experience from the arcade or the Mega Drive port released at around the same time.
The central character in Atomic Robo-Kid Special is this chubby little robot that looks like a trash can with piercing red eyes and a big nose. He's able to walk and fly wherever he pleases, battling all sorts of weird creatures across 25 stages, or "acts" as the game puts it. No story is given this time around, so all you have to do is dive directly into the action, pushing your way through straight corridors and maze-like environments with perils at every corner. In every 5th level you must defeat a large boss inside a closed chamber, and prior to that also face a similar enemy robot in face-to-face combat.
While the graphics have faithful textures when compared with the arcade version and come off as extremely colorful, parallax is minimal and barely visible. A few new enemies and new behaviors for existing enemies were added to the gameplay. Apparently there are no splitting paths anymore, and in certain levels you're bound to find secret passages through walls. In some cases it's mandatory to go through these passages in order to advance.


Act 1
(courtesy of YouTube user Arcade Forever)
Shooting is done with button II, while button I is used to switch weapon types. In order to extend and upgrade your weapon arsenal you must collect the appropriate capsules, which appear either floating at specific places or by destroying insect-like carriers. Hit the capsules to change their type/color before picking them up. Power-ups come as F (fission gun), 3 (3-way shot), M (directional exploding missile) and 5 (5-way straight shot with short reach). A golden capsule gives you a speed-up and successive blue capsules eventually add a 1-hit shield to the robot (take four of them to acquire one shield). Extra lives are hidden in the scenery and need to be shot at to appear in the form of a little white robot that flies to the right. White flocs that look like it add just a few more points to the score.
Note that trying to switch weapons when you're on ground level will make Robo-Kid jump instead, which means it can only be done when you're airborne. Moving about changes his firing orientation, but it's possible to lock and make him shoot in a single direction for the fission gun, the 3-way and the 5-way: all you have to do is hold the weapon switch button. Even though this sounds inconvenient since you need to plan your weapon switching in advance, in time it becomes more manageable.
So far the description of the gameplay is roughly the same as the arcade game or the Mega Drive port. The main difference in Atomic Robo-Kid Special is the life bar that allows you to take multiple hits before dying. Refilling this life bar is accomplished by taking the "life up" orbs that appear whenever you destroy mid-sized enemies and also during/after the duels against the small robots. Moreover, for each main boss you defeat a "life up / level up" orb also serves to expand the life bar. Just remember to get it before the screen fades to black.
Another aspect that's exclusive to this port is the fact that you can power up your weapons five times by taking successive capsules. The AP number indicates the level for the weapon that's currently selected (AP6 equals max power). However, cycling capsules more than five times will destroy them so take that into consideration when trying to upgrade. The most important weapons are definitely the 5-way and the missile, the first one for crowd control and the second one because it blocks bullets when exploding. The missile is, in fact, devastating against some enemies (try it on the third boss and see what happens). Unfortunately in this version the fission gun lost its ability to pierce through bosses, which makes it practically useless. 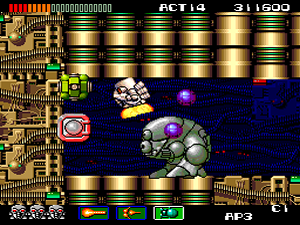 The super elephant!
If you see the merchant robot you can go to him and exchange one of your extra lives for whatever upgrades he's got in his stash. Deaths can be extremely punishing later on due to the excruciatingly slow default speed of Robo-Kid (which can make some boss fights nigh impossible), that's why it might be advantageous to use the merchant. Deaths also strip you off the weapon you're currenty carrying, so try not to die when using the missile or the 5-way. Lastly, touching bosses is lethal and can pretty much drain your life bar to a near-death condition.
Since Atomic Robo-Kid Special ditches the timer that required players to not procrastinate, there's absolutely no point in trying to score higher in this version. After all, you can go back and forth killing everything forever if you wish. In certain areas that's a litle bit risky though because you can be dangerously engulfed by many enemy clusters that might quickly drain your health.
If I had to choose one 16-bit port as the best option, I'd pick Atomic Robo-Kid Special. Autofire is implemented from the get go and the lenient life mechanic suits the game better as a whole, even though it packs a slightly tougher challenge on bosses and robot duels than what's seen in the Mega drive version, which on the other hand is certainly harder throughout the game itself. In any case I guess both ports are worth trying if for whatever reason you're into any of them.
There's no high score buffer or table anywhere, so you need to pause right after the last boss goes down if you want to take note of your finishing score. And here's the 1CC result I got, with no milking whatsoever. 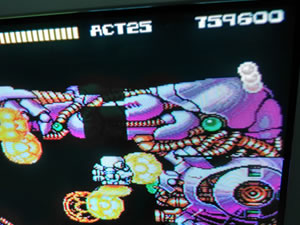