One of the many ports from the arcade game, Image Fight reached the PC Engine just a couple of years after the original came out. Just like most good ports of that era, it managed the tone down the raw difficulty of the arcade while keeping everything intact as far as gameplay goes. Often regarded as a vertical sibling to Irem's own horizontal classic R-Type, Image Fight shares much of its ambience, sound effects and graphical style, as well as the addictive old school lure that keeps you coming back for more no matter how difficult the game gets.
The story behind Image Fight is that you're supposed to prepare your combat skills across five stages inside a holographic simulator, only then proceeding to depart for the "real fight" against the alien menace in the game's three final levels. Graphics are crisp and colorful, the music suits the alien environments well and the sound effects indeed make you feel as if you're playing a vertically oriented R-Type. The player's performance is evaluated during the combat simulations, and in order to proceed to the actual mission you need to get at least a 90% average kill ratio at the end of stage 5. Failing to do so will make you play a penalty area before advancing, thus adding an extra stage to the journey.
The problem with the penalty area is that it's excruciatingly harder than anything else in the game, to the point it's practically not worth to play unless you're fierce on proving something or shooting for the highest score possible. Exploiting checkpoints is the normal device for scoring in Image Fight, which in this version is acceptable since you don't get more than two score-based extends throughout the credit. The good news in that on the PC Engine you have to perform really badly to not get the 90% destruction rate, so you definitely need to strive to access the penalty area. 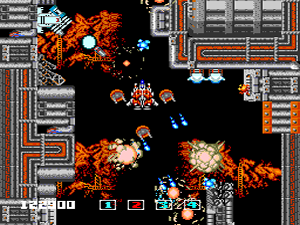 Simulated combat at its finest
In order to make the most out of the two basic inputs (button II shoots and button I switches back and forth across four speed settings), the player needs to destroy item carriers and collect two types of power-ups. The first one is a colored orb that cycles between blue and red and generates a pod that floats around the ship. The blue pod fires straight ahead, whereas the red pod fires in the opposite direction of your movement. It's possible to acquire three pods: the first one appears on the left, the second one on the right and the third one on the ship's rear. Once you get three pods the next one will determine the orientation of all pods, so they will either all be blue or red.
The second type of power-up is a frontal attachment that gives you several different options for extra firepower such as spread patterns, lasers, side shots, missiles, etc. These attachments have a particular behavior though, in that they are destroyed when hit and can only be replaced for a new one if you get rid of the attachment you're carrying.
Cruising through the open areas or the cramped corridors of Image Fight requires solid memorization and at least a little strategy when it comes down to power-up management. There are two checkpoints per level, and it's perfectly possible to recover in all of them no matter how hard they are. Wide open spaces get considerably claustrophobic later on, and since the sprites are slightly zoomed in and bigger in this port there's a constant feeling that you're piloting a ship with massive hitbox. I never felt that the game is unfair with hit detection though, and just like in the original arcade game you can take advantage of very strict positioning strategies to dispatch certain enemies. Just don't rely on the same approaches you might have used in the arcade version, they won't always work here.
Image projector OK!
(courtesy of YouTube user ShiryuGL)
The importance of details in the gameplay can even be measured by how useful a few other resources are. The act of switching speeds, for instance, creates a blue flare of energy behind the ship that can be used to damage enemies. There's at least one moment in the game where I switch speeds as an offense strategy. Aggressive point blanking is also very useful if you're familiar with the gaps in the firing pattern of your enemies, especially during the last couple of stages.
Unlike most shooters developed by Irem, Image Fight on the PC Engine does not loop. It also doesn't show your life stock while you play, only when you die. Going by a characteristic sound cue, my guess is that the score-based extra lives are granted with 50.000 and 250.000 points. Besides playing with the OF-1 Daedalus default ship, it's also possible to pilot Mr. Heli (from the game Mr. Heli) with the following simple procedure: press SELECT on the title screen to enter the sound test, highlight "song C" and press down, select and buttons I and II together, then put the cursor over "Mr. Heli" and press button I and RUN. In order to enjoy the game in a faux arcade mode (cramped vertical resolution with borders on the sides), you need to perform a soft reset (START + SELECT) and then immediately hold button I.
The choice of difficulty (or "class" as the game calls it) is made when you start the credit, with Leader class being considered as the Normal difficulty. Then you can choose to activate auto shot / autofire if you wish. That's how I played this version of Image Fight (Leader class + autofire). It was quite a solid, entertaining ride, and the best news as far as the PC Engine goes is that it was also home for the CD sequel Image Fight II - Operation Deepstriker. 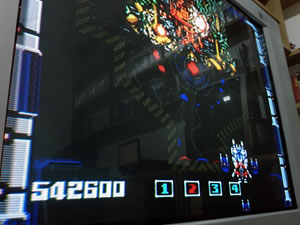 Note: remember to pause as soon as the final boss goes down, or else you won't be able to take a record of your 1CC score.
Posted by Edward at 10:16 AM