Ever since I watched Innerspace and Fantastic Voyage I had wondered about a video game based on the idea presented in these films. We always see vehicles and spacecrafts flying above ground or sent to outer space, but what if they would instead travel into the inside of living creatures? Granted, games like Abadox, X-Multiply and Wings of Wor were partially or fully designed around this premise, but weren't exactly what I had in mind. Microcosm, on the other hand, owes a lot to the abovementioned films, and could actually pass as a video game adaptation had the story been given a distinct treatment.

Originally created for the FM Towns computer system and later ported to other platforms, Microcosm is a very early take on full motion video used as backgrounds for a shooting game. As one of the most important pioneers of this style, Psygnosis did quite a bit of experimentation when developing it. One of the results is that Microcosm plays with a different point of view across the systems it came out for. The Sega CD version, for instance, is a pure third-person rail shooter, whereas the FM Towns original adopts a first-person cockpit perspective. 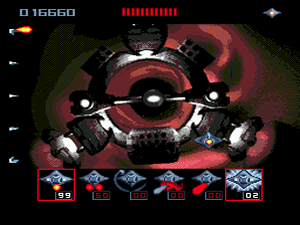 Since FMV was all the rage back then a fully animated introduction was almost an obligation for lots of CD-based video games, and Microcosm is no exception. Of special note is the fact that the developer purposedly kept the color palette at an even lower limit than the Sega CD is capable to deliver, which lends a grainier and slightly surreal aspect to the animation. Sending a miniaturized vessel into the body of a living person is of course the main part of the story, which begins at the cephalic vein and ends at the brain. Even though there seems to be no stage separation in the game, there are actually five areas to play through.

The entry into different areas is signalled by a change in the vessel you're piloting. All of them use the same inputs though, with A for shot, B for weapon switch and C for special attack, which can be either a smart bomb (stages 1, 3 and 5) or a brief invincibility period, here named as "sonic shield" (stages 2 and 4). Odd levels unfold as exploration missions with a boss waiting at the end of the organ, followed by a brief portal section that leads you into the next areas (except for level 5, which has two tunnel stretches with two bosses). Even levels, on the other hand, consist of high speed pursuits after escaping enemy capsules. The bad news is that if you fail to destroy them in time the credit is immediately lost, no matter how many lives you have left. In this particular case it's best to take damage, die and play it again from the start than to see the game end all of a sudden.

Microcosm has no continues, so getting a game over like that says a lot about how weirdly the game behaves when it comes down to lives and such. Another strange feature is that you're not able to pause at all during the gameplay itself. You can only pause when some of the intermediary screens between levels are being displayed. A cryptic password made of moving symbols is shown when you lose all your lives so that you can access later levels directly from the start screen.

I believe the lack of a pause function and the sudden loss of all lives aren't much of a hassle, what's more aggravating is the flimsy hit detection and how it slowly undermines the experience proposed by the game. Sometimes it just takes more than the usual share of shots for enemies to die, as opposed to how easy it is to see your energy depleted by confusing incoming bullets. A full energy recovery is possible by taking the ship-like item, but just like all other pick-ups you need to destroy the enemy that's carrying it first. The item gallery also includes double shot (2), triple shot (3), laser (L), missile (M), orbiter (O) and smart bomb / invincibility (SB). They are all limited, the only unlimited weapon in the arsenal is the default single shot. Well, for all it's worth it's actually the most efficient weapon in the game.

Another way to fully recover your energy gauge is by advancing to the next stage. There are no extends of any kind, no matter what the instruction manual of the Sega CD says (by the way, much of the information in there cannot be trusted at all). Note that despite the cheap hits everywhere, in Microcosm you receive absolutely no damage when touching walls. This of course can be exploited whenever you're low on energy and need to play safe. There's a vertical health meter for all bosses and the capsules during the pursuit stages on the left side of the screen. Hint: try to get to the bosses with smart bombs in stock, then trigger them to take away large chunks of their health.

Padding Microcosm with lots of cut scenes makes it seem longer than it actually is, but most unplayable parts can be duly skipped if you want to. The few ones that can't are quite short, and just like the nice atmospheric soundtrack they contribute positively to the cinematic feel of the game. Unfortunately the lousy gameplay does take its toll in the overall appreciation, yet Microcosm on the Sega CD is still more engaging than the versions that use a cockpit perspective such as those released for the PC and the FM Towns (in technical terms it's of course not on par with the 3DO port, which is also a true rail shooter where you see the craft from the outside and actually get to dodge stuff). Psygnosis improved their approach on the spiritual sequel Novastorm / Scavenger 4, a game that shows refinement in pretty much all aspects that matter.

In order to get the picture below I had to film the end of my credit. Once the last boss goes down the final score appears for less than a second only! Then you're treated with the ending animation and sent back to the start screen. 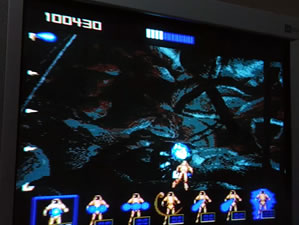