I always thought highly of well-made compilations of classic games. And one of the truths about this is that few of them compare or even come close to the sheer value provided by the discs Taito released for the Playstation 2 under the Taito Memories and Taito Legends monikers. Amongst the usual company flagships such as Darius Gaiden and Rayforce you'll still find interesting shmups to spend some time with. One example is Exzisus, a rather primitive yet fun horizontal shooter that appears both in Taito Legends (US version) and Taito Memories II - Vol. 1 (Japan version).
Even though Exzisus does have some sort of uniqueness to its gameplay, it’s obvious that the game has either predated Darius by a few months only or was developed concurrently with it. You can easily notice that in the way enemy formations are handled, how the ship form resembles a broken/sliced Silver Hawk and how one of the bosses actually looks like Dual Shears despite being a giant scorpion. Exzisus takes a simpler approach to backgrounds but the same raw, otherworldly quirkiness about the graphics also apply. Just note that the version in the Taito discs is the "conversion kit" variant, not the dedicated cabinet one. Differences between both can be checked in this page.
Exzisus is about a flying robot that’s capable of turning into a spaceship on the fly, in pure and glorious Transfomers-like style. Whenever you're respawned you materialize as the robot, a form that allows you to fly and to walk/crouch on ground level. Only two buttons are used to play the game. The first input fires both the main shot and the missiles that come out from the robot's jetpack, while the secondary input launches forward any options you might have acquired, which hover above the robot in the form of an eagle (above) and a dog (below). Options are acquired with the O item, released by destroying item carriers that appear from time to time. 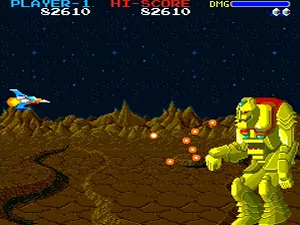 "My brothers enlisted in the Bacterion empire and left me here alone to die!!"
Besides the options, other available items in the game are D (spread shot), L (laser shot), M (missile upgrade), F (autofire), dark D (smart bomb) and A (aerodynamic transformation). The two weapon types you can actually use are spread and laser, which get upgraded by picking up successive items of the same kind. The same is valid for missiles, which evolve into ground trailing missiles and then homing/heat-seeking missiles. The A item is the one that causes the transformation from robot to ship form, also causing any existing options to sink into the ship's hull. If you get hit in ship form you'll revert back to robot, and upon being hit as a robot you lose a life, respawning in a previous checkpoint.
Each level in Exzisus is split in half by an intermediate section where the player needs to deal with a special kind of obstacle. In these areas you'll be flying amidst meteorites, falling ice blocks, moving barriers and expanding spores. The difficulty increases accordingly, with the final stage being naturally the trickiest to get through. Normally there's no need for heavy memorization since the game does not include physical obstacles of any kind except for the aforementioned midde-stage areas and the ground itself: scratching it slightly when in ship form is admissible, just don't lean into it otherwise it'll count as a hit and you'll be sent back to the robot form.
Between the primitive yet functional graphics and the decent dodging action with enemy waves arriving from all sides, Exzisus is reasonably amusing despite a few awkward details. From very early on you need to get used to the way missiles are fired, for example, and you also need to adapt to the hitbox when in ship form (it looks larger than it actually is). The robot has a much larger hitbox but doesn't incur in a severe handicap during the stages themselves, and lest size becomes a problem you always come across an A item prior to boss confrontations.
A gameplay aspect that can be regularly exploited when in robot form is the fact that both mechanical helpers are able to block and absorb enemy bullets. Besides, there are instances where launching them forward repeatedly is quite helpful, either in robot or in ship form. The first extend is granted with 150.000 points, and further ones come in intervals of 200.000 points.
One quick credit in Exzisus
(courtesy of YouTube user zxspectrumgames4)
Progress in the level is measured by a "map" gauge on the upper corner of the screen. At the end of the level it changes to "dmg" to indicate the health of the boss. Speaking of which, bosses are in a league of their own as far as campy design goes, even though they're not exactly pushovers when it comes down to the amount of bullets they're able to fire against you. I giggled the first time I saw the gold moai (which is a far cry from the most famous moai in the shmup world) and its incredible moving ability in the first level. The mechanical yeti in stage 2 doesn't fare much better, the red scorpion in stage 3 is the one that looks like a boss straight out of Darius and the violet salamander looks nothing like the sort, resembling a giant cobra instead. 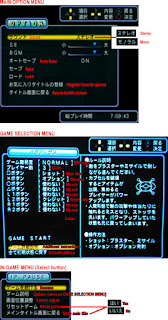 Click for the option menus translation for Exzisus on Taito Memories II - Vol. 1
Cheese and camp aside, the game is enjoyable enough and a worthy predecessor to later shmups with similar visual or functional elements, such as Android Assault, Heavy Unit, Spriggan Mark 2 - Re-Terraform Project and several titles in the Macross franchise. However, when going for the Playstation 2 as the platform of choice players should be aware that the Japanese disc allows full button remapping, unlike the Taito Legends release. Furthermore, upon testing the game in the latter I noticed it stutters during the asteroid shower of the first stage, which of course points to the fact that this particular disc isn’t the optimal choice to play the game. In fact, if you need to choose between regions you should always go for the Japanese releases in this case, there’s absolutely no doubt about it.
I reached stage 2-3 of Exzisus in my best high score on Normal difficulty. The scorpion boss spits out way more bullets the second time around, and losing the ship form while fighting him makes everything nigh impossible. 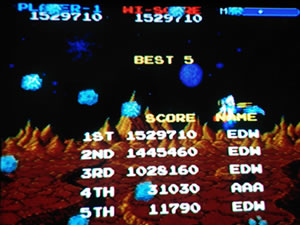