Surely controlling dragons isn't unheard of in the history of shmups, but here's a game that's definitely deserving of the unique qualifier. After all, the dragon in Syvalion is a golden metallic creature whose segments expand and contract as you move around gracefully breathing fire inside mazes. The idea in itself is quite interesting, but the enormous size and hitbox of the dragon, the procedural generation of level layouts and the trackball controls were quite a novelty when the game hit the arcades back in 1988. As I said, unique, and certainly ahead of its time. Just like many of the endeavors put forward by Taito such as Darius and its triple-screen cabinets.
Syvalion is in fact a part of the Darius universe, with a few direct connections and many design elements for enemies/characters shared between both. Even the story is linked somehow, but be my guest finding these links in more than one hundred different possible endings to Syvalion. Unfortunately the version included in the Taito Memories Vol. 1 (Joukan) for the Playstation 2 is completely in Japanese so the story bits were unbeknownst to me. Players who own the Western release of Taito Legends 2 for the Playstation 2 can experience the game with a full English translation though (sadly the Xbox and Windows versions of this compilation don't have Syvalion included).
Once the credit is started you have to choose between two game courses. The upper choice is the "basic series" and comes with predefined levels, enemies and bosses. It's often referred to as a tutorial mode because it's a nice way to learn the game's mechanics. The lower choice is the "real combat series", where stages are generated on the fly and respond to the actions of Syvalion the dragon. Graphical themes, music, enemies and bosses are random and change from one credit to the next, so the experience is never the same. As a rule of thumb, the better you play the harder the game becomes, increasing the aggression and often making boss attacks more dangerous.
Justice comes in the way of fire
(courtesy of YouTube user Arcade 60fps Attract Mode)

There's no automatic scrolling. The screen only moves when you move, and as you make your way across the level a large arrow points to the direction you're supposed to go within the maze. A single input is used to breath fire, but its reach is dimished after a while according to the red gauge at the bottom of the screen. It's refilled when you're not firing, but it recovers even faster if you're moving. While initially painted in gold, for each hit the dragon takes the segment closest to its tail loses its shiny golden hue and turns red. After six hits the dragon is completely red and totally vulnerable, dying horribly in a big explosion on the next blow. Hit detection is remarkably cruel in Syvalion, the whole dragon is a huge target and no grace period exists after it gets hit, that's why a string of tough hazards can quickly kill you. It takes some time to confidently move the dragon around, but what's important to have in mind is that all dragon segments go through the exact same path taken by the head.

Defeated enemies leave behind two types of items. The molecules are solely for scoring purposes, and the more you take within a certain time frame the more valuable they become. The second and less usual item is a triangle that provides +1, +2, +3 or even full health recovery if you're lucky. Items tend to drift down and away in varying speeds, and since health is not replenished in between levels there are moments when it's very tempting to get out of your way to pick up those precious triangles. Even considering that the dragon's breath can deflect almost all enemy bullets (not lasers), it still is quite risky to do that.
A full run of Syvalion takes around 10 to 12 minutes, depending on how fast you decide to get through the stages. Since they are all timed, exploration is out of the question and a good balance must be found between haste and caution, a relation that also applies to the scoring system. The less hits you take and the quicker you complete a level the higher the bonuses you get. Beating a stage without getting hit, for exemple, yields a special bonus of 2 million points in real combat mode (all points and bonuses are cut in half in the basic/tutorial mode). Of course that's easier said than done. Some bosses are just naturally harder than others, for example, and you might even face Syvalion itself as the final enemy. Additionally, all hazards that have a blue aura are invincible and must be completely avoided, such as spikes, bending plants, laser-firing turrets or those skulls that chase you around if you procrastinate for too long. The only blue enemies affected by dragon fire are the floating spores, which shrink quickly and disappear when hit. 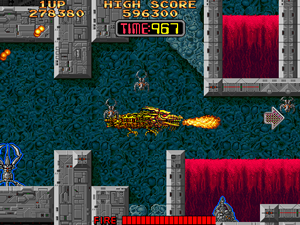 "On my way to morph with Dark Helios"
Besides the randomized levels and the possibility of getting higher scores, real combat mode also allows players to get special enhancements whenever a new stage starts (except for the 1st level of course). The requirements to get these upgrades are a mystery, so when it happens you'd better make the most out of them because they're gone when you die. Players might be awarded with a long spell of invincibility, exploding balls, homing missiles, a trailing shooting orb, a rotating barrier or even a gold Silver Hawk that flies behind you and provides extra firepower. Since the game is so unpredictable, receiving any of these special powers can be a lifesaver and might ultimately represent the difference between failure and success.
Although unforgiving and claustrophobic most of the time, Syvalion is also extremely addictive once you get the hang of it. The action is always intense and never slows down, the music is catchy and the inherent weirdness is a real treat for those who enjoy different kinds of challenge. The feeling of being at the mercy of the game only subsides with lots of practice though. Once you realize that levels are created in familiar chunks connected one after the other the gameplay starts to make more sense. The next step is paying close attention to the threats ahead and how to best evade them without taking too long (timeout = life lost + 300 additional "seconds").

Click for the option menus translation for Syvalion on Taito Memories Vol. 1
Despite the innovative gameplay, Syvalion didn't evolve into anything other than sparse participations or mentions throughout the Darius series. It did however have some sort of visual influence in later shmups such as Saint Dragon or Dragon Breed. The game is perfectly emulated on MAME but being able to play it in a home console is a real kicker, so kudos to the ever-so-awesome existence of Taito Memories. The only weird detail is that the default number of lives in the Taito Memories Vol. 1 disc is 2, so I switched it to 3 to keep it in line with the arcade default. Regarding in-game extra lives, there's only one single extend awarded when you score 1,5 million points.
The high score table shows the best results for both game modes. Scores for real combat mode are on the left, scores for the basic/tutorial mode are on the right. I hammered the game for a couple of days until I got the clear in real combat mode, and only then had a few credits in the basic mode. Since the game is so short I might try to improve the high scores below if I have the chance, but first I'll probably tackle the port released for the Super Famicom in 1992. 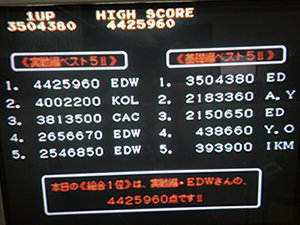