It's time to finally try to beat Radiant Silvergun.
I still remember the feeling of amazement as soon as the game arrived here more than a decade ago, as well as the general notion that it was much more approachable than overhyped Ikaruga.
I just haven't found the drive to play it every day thanks to a few diversions, such as Syvalion or some of those cheap budget shmups released for the Playstation 4. I do know that RSG has way more secrets than I had anticipated, so I guess I need to settle on a basic strategy to power up the ship in my own pace. Fortunately the game is running smoothly on MAME, which means I might even stream my practice sessions whenever possible.

If you're the kind of person who values perseverance as one of the paramount aspects of challenging endeavors, then you know how hard it is to let go of one of the items in your backlog.
This weekend I finally had another solid attempt at playing and learning Space Harrier on the Master System. I even emulated the whole game till the end to see what was in store beyond the first bonus level and man, I gotta say... This game is nigh impossible for me. Memorizing enemy placement *might* help, but on top of being pretty much at the mercy of luck at times, there are instances during boss fights where circular movement simply won't cut it. You'll just get hit and die.
It's disheartening.
Some fights aren't worth to be fought.
So away goes Master System's Space Harrier from my backlog.
August 5th 2022, Friday

So it took me some while to finally warm up to Dodonpachi Daioujou again, Black Label variant. The good news is that it only took me three days to start reaching the last stage again and feel the loop within my grasp.

The 360 port is damn fine, I just wish the replay recording feature allowed me to record all runs regardless of pausing. Unfortunately if you pause the credit can't be recorded. Seriously, was this  actually needed on a console port? Playing late at night and having to be alert to the baby on the crib makes it almost impossible not to pause during a full run.
Anyway, hopefully soon I'll succeed with the B-E ship.
Meanwhile, allow me to finally link the video below. Here I talk to fellow shmupper Aktane about this blog and a few other shmup-related subjects. Go check his channel on Youtube for some enthusiastic  content about the genre, you won't be disappointed.

Last week I took the PSP with me on a long flight and had great fun with Dariusburst, the game that actually convinced me to purchase the PSP more than a decade ago. Better late than never, that's what people say.
Anyway, I don't know what really happened during a quick stroll to the restroom, but when I came back I found the headphones connecting jack like this: 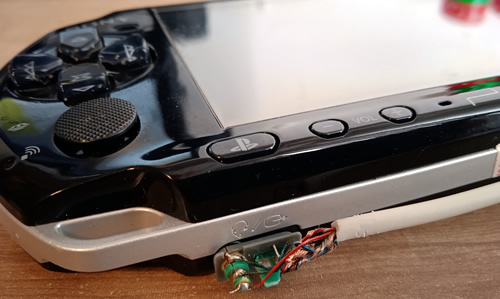 It still works, but I feel I'd better fetch a new one.
Such a stylish little system like the PSP deserves to be kept up to standards for the next use, whenever that might be!

Blogger users beware!
Last week I lost a complete article that was already written and about to go live for Eschatos, which means I had to rewrite it from scratch. I don't know exactly what's with the service, but everything disappeared and I wasn't able to get it back.
The previous times this happened I was able to undo it quickly. However, this time the system just auto-saved it instantly, so everything was gone in a snap. It was just as if Thanos snapped. Bang, gone.
I'll promptly export everything once again and do the write-ups on a separate editor from now on to avoid the hassle.

Ho ho ho!
Not much happening lately around here in terms of shmupping unfortunately, but at least I was able to keep my initial goal of two posts/clears per month.
Sure I wanted to have more time to play video games. Perhaps 2022 turns out to be a little different? We shall see!
Practice on DOJ WL moves on at a snail's pace, now onto stages 4 and 5 whenever possible.

Practice on Dodonpachi Daioujou has been quite stuttery and slow, but I figured it's at least important to mention that last night I was able to finally chain the whole first level a couple of times on MAME.
I don't intend to fully chain other stages, unless massive practice ends up teaching me by sheer repetition. Well, perhaps stage 2 might be doable in short/medium term, let's see how it goes. At the moment stage 4 feels like a wall though, and let's not even talk about stage 5!

Lately I haven't been able to play as much as I'd like for a number of reasons, but mostly because by the end of the day I'm a complete wreck. When I'm not too tired to do it I have frequent work or family appointments, which is of course completely normal.
I'm touching on this subject because trying to play anything when you're dead tired isn't the ideal way to enjoy a video game, let alone a shmup. The worst that can happen is losing that fuzzy feeling of excitement, enthusiasm and wonder. That's why backing off and loosening the video game clutch is absolutely normal. On the other hand, finding a single game that draws you in completely is the only real way to continue playing with joy in such a harsh temporary condition.
Fortunately I believe I have found such a game. It took me a little while to warm up to Dodonpachi Daioujou (white label), but I guess I finally started to get in the "practice zone" a couple of days ago. What does this mean actually? From my part it means that I'm eagerly waiting everyday for whatever chance I get to sit down and practice, which in my opinion is a hint of how good the game is, no matter how punishing or how long it will take to build the necessary muscle memory to succeed. Practicing a single boss fight for half an hour or going for full credits to gauge my present performance, it doesn't matter. The fun and the drive are the same, the magic is still there, the road is long and I'm more than willing to tread it in full.

A couple of weeks ago I didn't want to take the Master System out for a spin for the game of our weekly Whatsapp contest, so I just went and played it on my Japanese Mega Drive with an obscure adapter. Then I decided I could test out some of the European games that presented horrible graphical glitches on a regular Master System with the same setup.
To my surprise, Xenon 2 Megablast ran perfectly.
Finally I can indulge myself in the torture and pain of trying to beat this version of the game, which at first I thought would be better than the dreadful Mega Drive port. To my dismay it didn't seem to be the case, but I need to confirm that by actually playing it instead of just enduring a minute or so of the "experience". 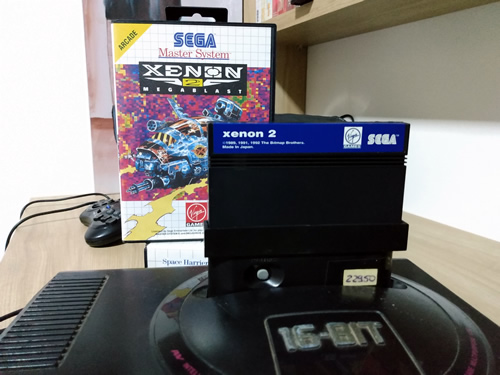 Covid-19 has come and gone around here. Three weeks ago my PCR test returned positive, and soon the same result followed for my wife. Fortunately I only felt a little indisposed for a couple of days, then had no more symptoms whatsoever. Everybody in the house also did not experience any noteworthy traces of the disease with the exception of the loss of smell/taste, so I guess we were a very lucky covid-stricken family. We did not test the kids, by the way.
Being forced to stay and work from home has its advantages, but with a 4-year old running around the house and a baby that's barely two months old it's extremely time and stamina consuming. I haven't been able to indulge in any sort of diversions ever since Lucas arrived and those include gaming, of course.
Does that mean I'm done with the blog? Hell no! My plan is to at least do one clear/write-up per month, even though these might not be any of those thrilling titles we know and love. I couldn't bend Raiden DX in time, for example, so this is the one that's being postponed indefinitely as of now. Unless, of course, I manage to achieve a mighty lucky run based on pure relaxed muscle memory.

I have finally become relatively comfortable during the harshest parts of stage 5 in the Expert course of Raiden DX, which means the loop should be coming any time now.
Last night I had a couple of consecutive good runs up to the final level, which were probably hindered by fatigue. Let's see how it goes if I manage to start playing a little sooner rather than by midnight.
May 11th 2020, Monday

My little girl knows a lot about spaceship names from shmups already. And yesterday she wanted to see game footage showing Opa-Opa, above all things.

I figured it would be better to show her the real thing, so I took from the PS2 shelf the Sega Ages 2500 Vol. 3 disc for Fantasy Zone. I spent some good 20 minutes showing her the bosses, and she even noticed the heavy weight in the shop! Then I realized the game was not saving any progress whatsoever. 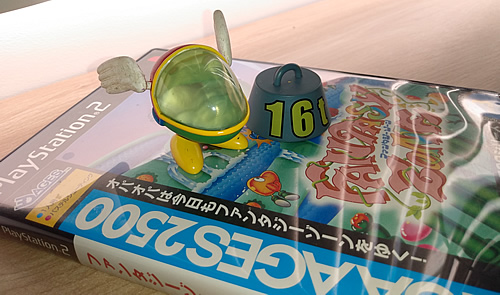 The first thing to do was of course check if the memory card was full. It wasn't. Tried making it work in the second slot, nothing. Then I had a quick credit of another game for a brand-new save, and it worked just fine. Still scratching my head, I dug out an old memory card that had no space left at all, erased all save files from very old games (bye bye Guitar Heroes and Rock Bands) and tried it again.

Mind you, both memory cards are original Sony material. How in the heck such things happen is beyond me, so if this ever happens to you remember that the game just might not like your current memory card.

It's been a while since the last post, but only because I stumbled upon another house move (hopefully the last one for the next ten years at least) and also because of the corona virus outburst, which has affected everybody's lives in the most unexpected ways.

Shmupwise I've finally come to a point in Gradius V where every credit matters. The loop should come soon, if my nerves in stage 7 allow it.

On another note, I looped Super-X on Mame on my second time playing (reached stage 2-5). What a lazy Korean Seibu meets Toaplan wannabe this one: 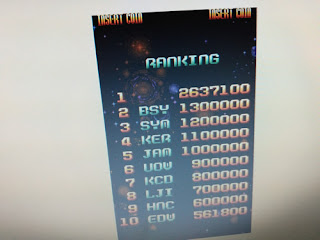 By 2019's final stretch I decided to revisit Gradius V after many years of a first contact with the game. I figured it was a fitting moment, seeing that I had just revisited Thunder Force V.

Many years ago I had been able to reach the 6th boss on one credit. I got there again quite quickly, and even beat him to finally enter stage 7 for the first time.

Little did I know about the challenge that lied ahead of me... I was absolutely destroyed there, and the few practice sessions I had afterwards weren't much better. The difficulty from that point on skyrockets!

So now I know it's going to take a little more time to achieve my goal. As the polite announcer says on every GAME OVER, I need more practice.