A few days ago I felt the urge to experience some 8-bit action again, so I picked up Bomber Raid for an afternoon. I left Action Fighter aside because that game is just too damn hard and was gathering a third layer of dust inside the cart slot. And what a difference in difficulty, I must tell you!

Bomber Raid was distributed in US by Activision - a situation that's rather rare for a Master System title - but there's no mention to this company anywhere in the European release, which is the one I have. It's a very standard vertical shooter that borrows a lot from 1942, with some added features that try to lend some special flavor to the gameplay. The resulting mild challenge is suitable for a few relaxing sessions, provided you can stand a single military march as background music for all stages except the last one, in a total of 5. Loopable, yes, and with a decent increase in difficulty in the second loop. 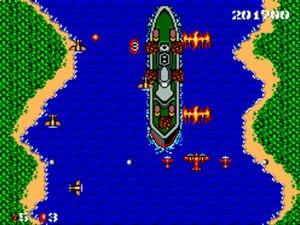 While you shoot down planes, tanks, ships and subs, the main weapon can be powered up with the P icons released by an orb that flies by from time to time. It takes lots of P icons to power up but in the end it's worth it, because the maximum power-up gives you a bird-like shot (a phoenix, so I heard) that can even block regular bullets. The same orb also releases speed items (S) and numbered icons that grant auxiliary planes or "bombers", as the manual calls them. Each number from 1 to 4 adds one bomber (maximum of 2) that stays arranged in formation. 1 puts them ahead of the plane by 45º, 2 puts them on the sides, 3 puts them behind the plane by 45º and 4 aligns both bombers in the back of the plane. These bombers shoot additional bullets whose direction can be toggled between 2 available options by pressing both buttons 1 and 2 simultaneously - something that cannot be done accurately if you're using the rapid fire unit like I did. [games like these not having autofire is just stupid, because the lack of autofire is only justified when the game uses a charge shot scheme!] On a last note, the bombers can take some hits but are ultimately destroyed by enemy fire.

A third kind of item is also left by the flying orbs, but that's a harmful spike-like thing that must be avoided or destroyed. Completing the arsenal of your plane there are also the bombs, which also serve as smart bombs and are deployed differently according to how many bombers you currently have. Their stock is automatically increased by 3 for each new stage. Unfortunately, the response of the bomb button is really poor, sometimes it takes too long to activate once you press the button. 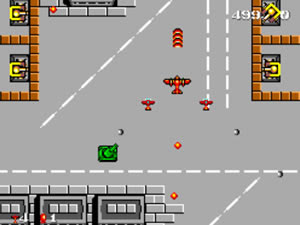 The brief scenes of the airplane taking off and landing in the beginning and at the end of the game are there just for some superfluous eye candy. Bomber Raid is decent fun for 8-bit standards, but I think it's got too much blue in the graphics. It seems you're always flying over the sea, and the only real change of scenario appears as the game is about to end! 2 or 3 speed-ups are enough to handle the enemy swarms later on, as too much speed will definitely hinder the gameplay, while dealing with the numbered icons for formation bombers can get chaotic and frustrating in later levels, as you most certainly have to stop shooting in order to get the formation you want. At the end of each stage you're awarded a bonus based on the percentage of enemies killed. Extends are given with 50.000 and 100.000 points, and then for each 100.000 points after that.

In my second loop I reached the 3rd boss again, and here's the score I was able to get: 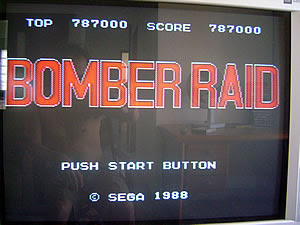