In my rush to complete my shmup collection I have bought many, many more games than I'm actually capable of playing. All of them remain untouched after I test them, and are only played when I think to myself "OK, now it's your turn to bow down to my not-so-mighty skills". The reason why I choose certain games to beat generally relates to something I read, a conversation with a friend or a challenge thrown by a peer shmupper. However, in the case of Mushihimesama, I had absolutely no intention at all to try clearing it because - talking about Cave - I'm still stuck with DoDonPachi. Until the day I got home after work and I thought "damn, I want to blow things up today" while firing up Mushi and DoDonPachi Dai-ou-jou.

I have to admit that from that day on I was irreversibly hooked. I never thought once before that I would be enjoying a Cave game so much, maybe even more than the awesome Deathsmiles. Set upon a fairy tale world where an insect princess must ride a deadly beetle and battle an endless bug infestation, Mushihimesama has the Cave trademark all over its gameplay, while being a lot more forgiving than the company's killer app, which is considered to be DoDonPachi. The Playstation 2 version is also considered by hardcore players to be not as faithful a port as DDP DOJ or Espgaluda, but from my standpoint it plays beautifully, in any of its 4 included play modes - a treat that can be considered as being actually 4 games in one package. 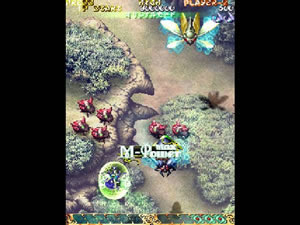 Arcade mode offers 3 options of play: ORIGINAL, MANIAC and ULTRA. While the first one corresponds to the initial arcade release main gameplay mode, MANIAC has much more dense and somewhat slower bullet patterns, with ULTRA standing as an impossible bullet curtain rape that only the really gifted dare to face. With the exception of the setting for extends, they all share the same options. ARRANGE mode is exclusive to the PS2 port, consisting in a game that resembles MANIAC mode, but makes things easier for the player as every hit will automatically trigger a bomb. This means you only die when you get hit with no bomb stock. In ARRANGE there's only one difficulty setting, no continues, 2 more available options/lasers (total of 6) and it's possible to change the weapon you're using by the press of a button, something that's not possible in any of the arcade modes.

I beat the game in ORIGINAL, a mode that has fewer but way faster bullets, in what could be described as a more intelligent Psikyo style of shooter. It's not such a twitch fest as MANIAC , but it was the first version ever released and therefore the one to be beaten.

ORIGINAL is also the mode with simpler scoring system. There are no special quirks, it's just a matter of killing everything, getting the highest possible number of golden jewels and timing the death of larger enemies, because their explosion turns all on-screen bullets into jewels. If we venture into any of the other modes though, we have to also deal with a hit counter that works like in the DonPachi series. Throw in the so-called "child counters" that come with each laser/option and all the special rapid fire settings and one has to be prepared to go through a very complicated set of strategies in order to fully understand how the scoring system works. As I'm a busy guy, I don't have time to delve deep into it and I learn it as I play, that's why I can't be too specific on it. For details on how the scoring system works a good source is the Shmups Forum strategy thread. 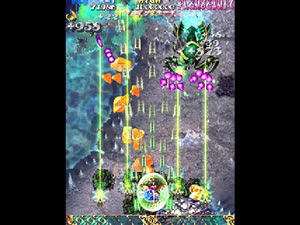 The rest of the gameplay in ORIGINAL consists of choosing one of 3 weapons (red=wide, green=medium, blue=concentrated) that are powered up by icons throughout the game and can be switched by these same icons, which cycle between each weapon type. The lasers/options come with icons as well, can be stocked up to 4 and can be arranged in formation (fixed) or trace (shadowing like in Gradius). By holding the firing button, ship speed is reduced and all options gather around the character, providing for a more concentrated firepower and more adequate speed to weave though complicated bullet patterns. Every life starts with 3 bombs that have panic function. Extends are given according to score, and a 1Up can be obtained right before the 3rd boss by destroying the 8 segments of the bug creature and then its central head. Lives are very important here, since each one is worth 10 million points upon game completion and corresponds to roughly the amount of points you get by playing the whole game!

There's no denying Mushihimesama is a beautiful shmup. Even more beautiful is the fact that Cave hit the spot with the awesome soundtrack. Action and music blend in such perfection that I always yell "woo-hoo" every time the climax of the 5th stage BGM kicks in, coinciding with the most hectic moments of the game and showcasing the true essence of shmup rush. It's an extremely powerful and addictive experience once you start digging it. Furthermore, evolution in this game is endless, and even in ORIGINAL there's room for improvement, such as correctly milking the plants for golden jewels in stage 2. There is a True Last Boss that does not appear in ORIGINAL and is reserved only for ARRANGE mode - together with the ULTRA mode, that's when this title achieves its status of one of the most difficult games ever created.

As mentioned above, my 1CC was achieved in ORIGINAL mode, NORMAL difficulty with default settings, using the M weapon (green). I doubt I will be able to easily top this high score, so I'll be focusing on playing MANIAC whenever I get back to it. 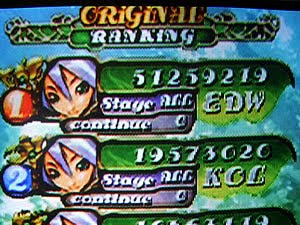