Shmup addicts who have a knack for the whole 16-bit era and style definitely owe themselves a shot at Gleylancer. The problem with this is that the real cartridge is one of those whose price skyrocketed since ebay took over the video gaming collecting world as the main source for retro stuff. After all, there are people who think spending more than 100 dollars on an old game is insane. I would say it's well spent money, especially on an age where those crappy easy PS3 games come out for 50 USD a piece.

So there you have it. Gleylancer is rare, expensive and until recently vastly unknown unless we're talking about emulation (it got a re-release for the Wii downloadable service). Of course I played it on real hardware, simply because emulation and downloadable shit piss me off.

Right after the console is turned on, the player is granted with a lengthy attract mode showing the game's backstory. Soon you'll know that the pilot of the spaceship is really a teenage girl named Lucia that seems to be called upon in the heat of battle to, you know, do that normal thing you do in shmups: save the universe. She takes off and, as the game starts, you must choose how you want to operate your pods. There are six options available, ranging from straightforward firing to homing, shadowing and rotating pods. My favorite is the MULTI-R, where you can inverselly fix your pod's direction in a 3-way fashion according to your D-pad with the C button. 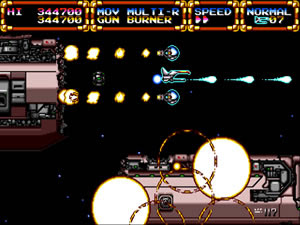 Gameplay also includes 4 ship speeds at the press of the A button. I used all of them, but mostly I would leave my thrusters in speed 2. Lastly, there are 7 types of weapons available with incoming icons. Even though they feel somewhat unbalanced, the game is designed with several parts where each one of them is more recommended than the others. The best ones are the laser and the flamethrower, but the bouncing green vulcan is also quite neat. With 100.000 and 200.000 points you get extra lives, and then for each 200.000 points after that. There's also a solitary 1UP that appears in stage 4.

The thing that impressed me most about Gleylancer is the complete absence of slowdown, something all 16-bit shooters struggled with. It feels great to weave through the stages without a single hint of hardware pushing. Then there's the stage design - despite some uninspired ones like the huge spaceship fight (stage 5) and the preamble to the final showdown (stage 10), all of them are very well done graphically and showcase great atmosphere for a space shooter. I love the ice stage (7) and the debris from the ice block explosions, and it's great fun to use the green bouncing weapon in the caves of stage 3. Parallax abounds, in some cases to the point of distracting the player and adding to the difficulty - the first stage is a classic example in this regard, with all those asteroids and flying ship wrecks. The music could've been better, as well as the sound effects (which sound muffled sometimes), but at least it's not bad. 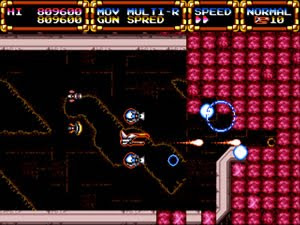 Until midway into the game the boss battles are ridiculously easy. The challenge picks up in the middle, but the real threat is only posed by the last boss. He puts up quite a fight to compensate for the wimpy ones that come before him. Overall the challenge level is well balanced and, while the game offers unlimited continues, clearing it with one credit will take a small degree of methodical approach and half a dozen dedicated runs. Scorewise there's not much besides killing everything that moves, but stage 9 offers the possibility of racking up lots of points (see picture above). Just die facing the boss, and you get back right at the start of those red blocks section. Since this part is designed to yield approximately 200.000 points, it's possible to earn an extra life every time you play it up until the boss. Life stock will only decrease from premature deaths, but it's theoretically possible to counterstop the game by doing this.

Extra features are comprised of some cut scenes between stages showing Lucia in her cockpit and a handful of scratchy voice messages when you start the game and prior to important sections or boss fights. The ending is very detailed, just like the opening story, too bad the accompanying music is a complete letdown. In any case, Gleylancer still remains as a very solid and fun shooter that all shmup fans should get to know, especially for people who are into titles like Thunder Force IV, Eliminate Down or Hellfire.

In my 1CC run on NORMAL I did the stage 9 milking maybe 3 or 4 times and then moved on. So here's my final score: 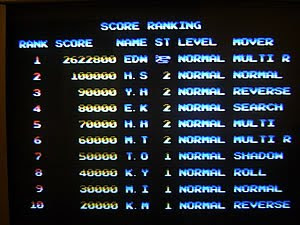