The fact that this game was once supposed to be Darius III gives me the creeps. Yet it is displayed within the game itself as a so-called "Project Gun Frontier 2". The truth is that Metal Black is nothing like Gun Frontier, giving me the certainty that this statement exists solely to indicate that the same development team worked on both titles. The games couldn't be more different and, in the case of Metal Black, the style couldn't be more unique: a short horizontal burst of awkward design and undeniable cheapness, and a potentially frustrating experience for those who decide to play it for score.

The reminiscence of Darius is more than obvious from some enemies that pop up as early as the 1st stage. There's a hermit crab that surfaces below a wrecked building, followed by things such as an altered huge snail and a green flying fish. The theme isn't predominant though, being mixed with biomechanical creatures and landscapes that create a very distinct atmosphere. It's graphically decent, close to but not in the same league of Darius Gaiden, for example. In a reality where the Earth is dead, you pilot a "Black Fly" aircraft against the alien forces, patrolling one of the planet's dead cities before rocketing to outer space while collecting power-up energy bits known as "newalone". These energy bits increase shot power and provide fuel for the Black Fly's beam, a devastating weapon that can also be deployed by the bosses in the game. After all, they are able to collect newalone as well. This is an outright interesting concept, especially when you figure out that both beams (from your ship and from the boss) clash to create a huge ball of energy. The one who has a higher stock of newalone will win the clash and send this energy sphere in the opponent's direction for great destruction effect. 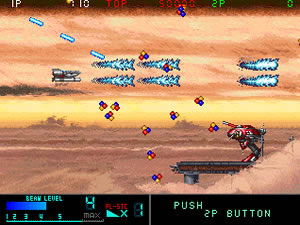 With only 6 stages, Metal Black might feel short, but it's a deceiving idea to consider it easy. The main reason for that is how the game tosses enemies at you in later stages. There are some highly unpredictable and fast thingies that have the nasty ability to crush you, even when you think you're flying a section that's been long played and mastered. Of course this means more practice is necessary, but it doesn't take out the related annoyance. I've had my share of cheap deaths in similar cheap games, so I can safely declare that Metal Black ranks on the top tier of such frustrating shmup moments. Another annoyance factor appears when you play it for score. The two 3D shooting bonus areas that come after the 1st and 3rd stages are severely flawed in a sense that (1) hit detection sucks and (2) sometimes the enemies will remain off-screen for a long while. In the end, these horrible sections are purely based on luck. It's unnerving when, for instance, you finish the 3rd stage with a nice score and get shafted by the bonus stage, failing to kill the 10 necessary aliens for the 20.000 bonus points because the game REFUSED to lock onto the damn aliens even though your cross-hair was right over them. But wait! Am I playing this game on the Sega Saturn? A+B+C+START, yeah!

If we don't take the above paragraph in consideration, then we have a shooter that plays considerably fine. Normal firepower gets wider with more newalone energy collected, and actually has a nice reach above and below the ship that offers a good advantage over enemies that come from these directions. The semi-rapid fire demands the fire button to be tapped for a continuous firing stream (hint: tapping A and C alternately will give best results). The B button triggers the beam attack, a move that drains the energy bar completely and should be used carefully. Knowing when to use it is mandatory for surviving. When the beam is used at maximum level, a brief series of lightning bolts will wipe the screen of bullets and minor enemies, while mid-level beams will only fire in a straightforward fashion. Collecting newalone while the beam is discharging will replenish its energy on the fly and keep the beam alive. Last but not least, it's necessary to tap the B button during beam duels with bosses.

Basic opportunities for scoring higher in Metal Black are (1) killing everything that can be destroyed and (2) having lucky runs on bonus levels. Each newalone is worth 10 points, so collecting them in excess won't really boost the score. Waiting for some enemies to split before killing them is a good strategy. However, waiting for the 4th boss (the giant rocket) to open up completely is tempting but too risky, since the small creatures that come out of it are a pain in the ass. Mostly I beam the boss twice with maximum power and he's gone, at the expense of almost no score at all. I didn't notice any rank in the game, it just gets unfair by the end of stage 2 and remains like that for the rest of the journey, regardless of performance or score (or number of CONTINUES used). Point-blanking is very useful and should be done whenever possible.

I have heard general praise for the Zuntata soundtrack here, but for me it's just average and almost "meh". The BGM for the 3rd stage is very good, but in contrast the song for the 1st stage is so underwhelmingly cheesy that it fails to establish the correct mood for space blasting. I do enjoy the fact that all levels and BGMs have proper names though, as it adds to the coolness of the package. Too bad Taito included those dreadful bonus stages. 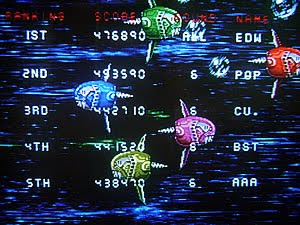