The above dialogue is shown in the start screen of Toy Shop Boys, a somewhat strange vertical shooter for the PC Engine. From it we deduce that "Gamma" is the ultimate bad guy in the game, and that the three boys with caps are the heroes that must defeat him after going through six stages of battling, well... toys. Rubber ducks, robot/soldier figures, teddy bears, mounting blocks, little cars, little tanks and much more in a myriad of mildly trippy sceneries. It's actually quite enjoyable, at least while you're discovering it. More on that in a few paragraphs.

Upon hitting the RUN button I chose NORMAL level and found out I should use one button to fire and another to cycle the boy that shoots. The two remaining kids always stand a little behind and follow the one who's shooting, with the auxiliary task of absorbing bullets. The boy with the red cap shoots a blowpipe, the boy with the green cap throws boomerangs and the boy with the blue cap swings what looks like a light saber, a weapon that cancels bullets but only damages airborne enemies. It's a nice gameplay mechanic that makes you use all of them in order to overcome the obstacles along the way. 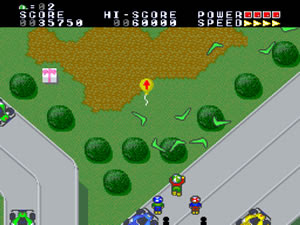 While playing, it's good to be on the lookout for the blinking enemies because they carry the power-up balloons. You increase firepower with P, get a 2-hit shield with S, increase speed with ↑, decrease speed with ↓ and smart-bomb with *. All surplus Ps and Ss also work as intantaneous smart bombs. The maximum number of speed-ups is 4, and this is a good thing because it's impossible to get too fast. Actually, speed 4 was my favorite selection most of the time. There's a solitary 1UP that can be found in the 5th stage, but it's totally unnecessary since you get an extra life with 30.000 points and then for each 40.000 points after that. And here's where the problems with the game start.

Up front Toy Shop Boys is surprisingly fun. Decent use of colors and enemy placement, a decent array of weapons and some easygoing music to boot. I personally found the BGM for the 2nd stage to be very relaxing. Overall it's quite an easy game until the last stage, when the challenge gets a lift with the line-up of previous bosses to be defeated. Only after beating them again you will face the evil Gamma, a skull creature that materializes off of a TV screen. In my attempts to beat the game I lost all my lives fighting him maybe 2 or 3 times, so I guess he's a tough last boss - a little too hard for such a laid-back and light shooter, but a worthy one nonetheless. Fireworks tell you the mission is over and you're treated to a nice ending where the boys head home during the sunset, and the game restarts.

"Cool, it loops!", I thought. "Let's see how far I can get with more bullets and shit".

Suffice it to say there's absolutely no increase in difficulty. None. You go through the same patterns all over again, with the same exact degree of challenge. And when I thought I would have some problems the game just skipped the last stage and restarted after level 2-5. And repeated it for the next 3 loops. I could've gone on for some hours maxing out life stock until reaching the counterstop, but I was tired and had already developed a minor headache so I decided to quit after surpassing a score of 2 million. What would be the point of playing any further? The experience was ruined, and it just bugs me as to why the developers didn't simply make me play the HARD difficulty for the second loop.

Toy Shop Boys could be described as a Gamtec game (of Magic Girl's fame) that instead of sucking is actually good. It could've really been above average if it weren't for the inexcusable loop flaw. No shooter should go on like that with such an underwhelming challenge level because there's really no point in counterstopping a game just by standing hours in front of the TV facing the same easy stuff over and over again. The HARD setting is a lot more difficult - dying leaves you too underpowered to continue playing - but my patience had dried out by then and I quit the session. The result can be seen in the picture below, taken midway loop 5-2. Just take a peek at the number of lives! 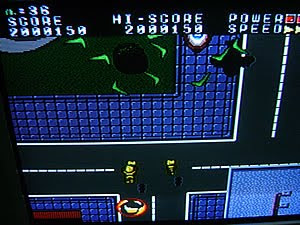