Darius games were plenty during the 16-bit era, and the PC Engine had a great share of home conversions. Super Darius II is a revamped port of the original arcade game and, excluding the later version for the Sega Saturn, it is well known as being rather late to the console party. There's an uniqueness to this game however, since it is a lot different from what people know as being Darius II, to the point one can consider it a completely different entry in the series. Sure it retains the general stage order and feel, starting in the Sun and ending in Jupiter, but sprites are swapped between stages and brand new bosses wait for the player at the end of each area - the only ones that made it here are Leadain, Yamato and Killer Hijia.

The most notable change in Super Darius II is the zoomed-in aspect of the play field. This goes much against the wide scope of the arcade and drastically alters gameplay, because the screen is always wobbling up and down a bit below the huge score display area. The second big change is in the music, a guitar filled collection of tunes that not always resembles the original classic Zuntata tracks. Even though the theme for the first stage is very recognizable, for example, later tunes were changed completely and detract from the original feeling of playing Darius II. It would be most correct to say it comes down to taste, and for mine even if it's not bad in any way it just isn't on par with the original work. 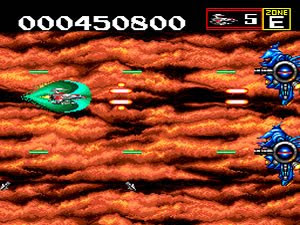 Given all the differences, it's impossible not to compare this version with others, namely the Mega Drive one. While both games stand well on their own, the Mega Drive port is better. Not only it's more faithful to the arcade, but it's also easier and more fun to play. Super Darius II feels contrived by the big sprites and lacks some of the graphical effects that made the original so cool. One example is the warped background that takes over the screen during the boss fight in area A. It's not there in the PC Engine game, adding to the disappointment of having Golden Eyes instead of Hyper Sting as the first boss. Also noteworthy is the Engrish message saying that the boss "is approached" fast and some rare but crazy bugs where chunks of the scenery will disappear completely as you fly by them (during that spike press moving up and down in stage M). Adding to the difficulty, the shield is a lot less efficient in Super Darius II. Its second color is blue instead of the traditional silver/gray, and no matter the shield level it also turns completely red if there's only one hit left. On the other hand, dying won't strip you completely of your firepower, you just lose one power level for each weapon. The rest of the gameplay is intact: kill a particular wave of enemies to collect power-ups for main shot, bombs/missiles, laser and shield. Occasional 1UPs might appear, but no extends are given based on score.

Talking about bosses, the one that surprised me most was Revenge Shark, the battleship from stages D and E. He's so unique and unlike any other Darius boss it was quite a challenge to learn how to beat him while preserving the shield. Dark Modon appears as the one and only boss for the 6th stage, and also offers quite a fight before going down. One of the final bosses, Mechanical Bio Strong, is so easy to be taken down it pales in comparison with the original Bio Strong. Speaking of which, a lot of the original Darius II bosses were ranked down as mid bosses in Super Darius II, joining the ranks of old bosses returning from Darius. It's just one more aspect that helps give this game its special flavor within the series.
Co-op play still isn't available, but like in the Mega Drive port it's possible to select the player in the OPTIONS screen - red Silver Hawk (Proco Jr.) or blue Silver Hawk (Tiat Young). They appear during the attract mode, which strangely has absolutely no sound. It will also sound weird for a lot of people, but I do think Darius Plus and Super Darius are more fun to play than Super Darius II.

Here's my high score on NORMAL, going through route ABEHMSY. 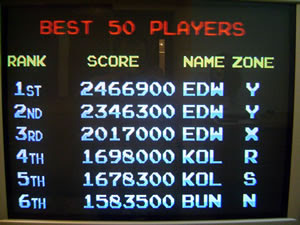