Fast-paced futuristic action on a hoverbike is something no ordinary gamer would refuse. When this idea is implemented in a shmup you have something like Down Load, a trippy ride with a guy who seems to be framed in the middle of the night and sets off to avenge the death of his best friend, rescuing his girl from the bad guys during the process. Of course I implied this from the several cut scenes presented in Japanese - and that's enough for story, at least on my part!

Ever since I got this game I was hooked to its package. The main character is all over it with a bold, inconsequent grin that translates well into his attitude throughout the story, a sequence of bit parts that unfold like a good old fashioned adventure. Some stages have several sections and bosses (like the 1st one), while others pass by on one quick and furious flight (the outer space in stage 5). The last stage is also comprised of several sections, but these aren't separated by any fades. 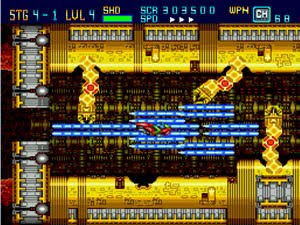 One of the few parts where you get a breather, at the start of stage 4

Down Load's most prominent gameplay aspect is the fact that it gives the player only one life. Once the health bar is depleted it's Game Over, so you'll want to keep the health up at all costs. The array of weapons available provides for the means to survive - upon starting a stage you're given the option to choose between 2 main weapons (spread and laser) and 3 special weapons (chaser, crusher and barrier). Each main weapon can be powered up 5 times, and its power level is shown right beside the health bar. The icon for this power-up looks like a fly's head or a big blinking pill. Although being limited, the stock for special weapons can also be replenished by the icon that cycles with the one that replenishes health (light blue and larger / dark blue and smaller). There's also an extra pill-shaped icon for temporary invincibility (smaller) or smart bombing (larger).

Since it's very easy to die in a snap, memorizing is a key factor if you want to beat the game on a single credit. Avoiding greed and waiting for the icons to come closer instead of rushing to get them is a must. There are 4 selectable flight speeds, and walls can be touched and used for blocking at will. My favorite special weapon is definitely the chaser, since each load gives you 96 of these.

Competent for the PC Engine's capabilities, the graphics are a mixed bag of mechanical and biological cyber stuff put together, sometimes presenting an amazing parallax that adds greatly to the sense of speed. Generic and muffled sound effects are compensated by a soundtrack that's overall adequate. It makes the game fun while it lasts, just not remarkable in any special way. If only the programming side wasn't so badly implemented... Not only does the game come with an useless password feature (WTF do I want it in a shmup for?), but it also doesn't buffer high scores. So this was another case where I had to be fast and pause right after dispatching the last boss to take the high score picture - I might have lost some 10.000 points from him, but whatever. 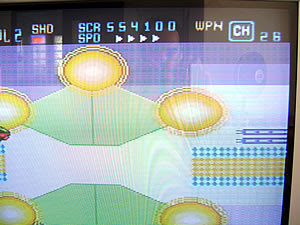 The bad programming doesn't stop there though. After the end sequence the screen halts in a message that displays "THE END OF FILE". You can only exit by pressing SELECT + RUN. Just to have an idea, the only other instance where I saw this kind of dead end was on Divine Sealing for the Mega Drive. Not a healthy comparison, huh?

I have hopes that Down Load 2 will improve on this when I get the chance to try it.
Posted by Edward at 12:55 PM