Still taking a serious beating from some other shooters I've been playing, I suddenly got in the mood for some mindless rail blasting a few days ago. The choice fell on Hyperzone for the Super Nintendo, in fact one of the few representatives of this sub-genre on this specific platform. Given the strength provided by the impressive mode 7 scaling effects, one would assume the SNES was perfect for this kind of shooting games. However, Hyperzone is the only one I know of, standing as a crazy mix of F-Zero (the best racing game on the SNES, period) and Space Harrier. In Japan the game is spelled Hyper Zone (which I think is cooler) and has stages 1 and 3 swapped, besides presenting some minor differences in the soundtrack. Who cares anyway? The core experience is the same on both versions!

Those who played F-Zero will feel at home with Hyperzone, since they are graphically very similar. The ship flies into the screen and must stay within the boundaries of the flying field at all times, receiving damage when getting beyond it - just bear in mind that in later levels it will be necessary to do it. Each life has an energy bar that can be replenished in special areas of the track, just like in F-Zero. Controls are simple and comprise 2 buttons: fire and deceleration. The speed is always cranked up to the maximum, so this deceleration feature is useful both to dodge tricky obstacles and to milk the energy replenisher areas. There's no autofire for the main shot, but starting from stage 3 every newly acquired ship has the ability to charge its weapon for a more destructive blast. It's really cool to see the main character change ships in the start of all later stages, since some of them will even affect the way the upper HUD is displayed. 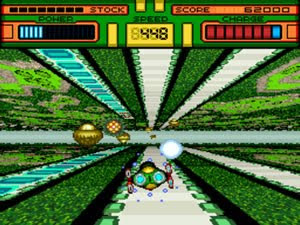 Charging the shot during the 4th stage - to the left, a recharging field

Mode 7 makes everything really cool in this game. Someone called my attention to how the upper and lower graphics for the first stage are actually mounted Tetris blocks! The scaling is smooth, all stages are very different graphically and the overall futuristic feeling is remarkable. While that makes for a great part of the fun in Hyperzone, there are certain things that bug me, like the fact that it's impossible to reach the uppermost part of the flying area - in the lower part you feel like you're just hovering above the ground, but on the top you're blocked halfway with a lot of unreachable dead space. Why is that? It would've also been nice to have an option to increase the maneuvering speed, just because the ship feels too damn slow. Fortunately that's never a problem as in some other rail shooters out there, since it's fairly easy to dodge almost everything. All bosses are a joke, but a few parts of the Neo Megalopolis zone (stage 6) are nearly impossible to handle. Music is okay.

Curious things everyone will notice: two of the bosses are just rehashes of the first boss from Space Harrier (the snake dragon), while another is shaped as a Super Famicom controller. As I mentioned though, they are ridiculously easy to be beaten - just keep moving at all times and you'll be okay. The energy bar is fully restored at the start of the next stage, with the game granting extra lives for each 30.000 points. In some weird cases, however, this will work only with 50.000 points - I didn't check this further since I looped the game on the second time I played it. I found it too easy, probably the easiest rail shooter I have ever beaten. After the ending that shows all enemies from each stage, Hyperzone restarts but no extra lives are granted anymore. You keep the most powerful ship from the 1st loop, and there seems to be no increase in difficulty whatsoever.

I could write some more about what I would've liked to see in this game (such as sharp racing turns à la F-Zero), but it is mildly entertaining as it stands. It's easy alright, but it's a welcome change of pace from other shooters , and unlike Star Fox you can measure your performance with an actual score (Star Fox does have scoring, sorry for the mistake - EDIT 19-MAR-2010).

The high score below was achieved when I reached stage 2-6. 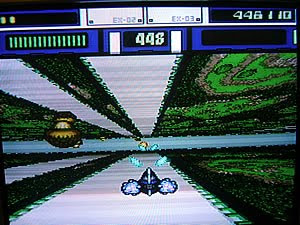