March was the Intergalactic Shmuppreciation Month, and The Game Paradise! was the challenge assigned to me as I registered in the 2010 celebration/contest. All I needed to do was spread awareness of the genre by playing the game, 1CCing it and sharing my thoughts about the experience. I’ve always wanted to play this after giving it a fast go with my brother in co-op a long while ago. By that time I found it very hard, but the truth is you can never say you know a shmup until you actually play it.

Known in Japan as Game Tengoku, this incredibly off-beat title is a port of a Jaleco arcade game. Despite some contributions to the genre Jaleco was never known for its shmups, but there's no denying they delivered a great product here. It's a cross-over that unites several characters from other games developed by the company (Exerion is the only one I'm familiar with though), in a totally wacky setting that puts them against an evil villain who took over an arcade joint. Imagine the crazy ambience of Parodius with a Psikyo-style of gameplay and you get the picture. According to its unique theme, the game has the player flying over arcade cabs and literally diving into some of them during certain stages, with several unforgettable, colorful and diverse sights to behold along the way. The most surprising one for me was the computer program that's hijacked by an 8-bit CPU, complete with aliens from Space Invaders and Demon Attack, followed by things such as the colored blocks from Breakout. 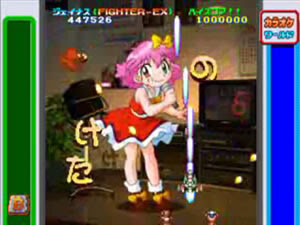 Showdown with karaoke boss Misato, during the 4th stage of the Arrange Mode

Out of the five available characters it didn't take me too long to choose the Z-Dyne robot. They're all very distinct from one another, and Z-Dyne's main advantage is the lock-on nature of his main weapon. Jeynus reminds me of Ain from the Sengoku Ace series, Selia pilots the regular jet with spread gun, Momoko fires heart-shaped shots and Pig's arsenal is comprised of bombs, which can actually be devastating at point blank distance. During gameplay you can get 2 additional helpers, which are smaller versions of the characters that hover in a formation behind you, adding a bit of firepower. All characters seem to fly at the same speed, and they all have smart bombs and a charge attack at their disposal (those familiar with the control scheme of the Strikers or Gunbird series on the Saturn will feel right at home). Maximum power is reached after collecting 6 power-up icons, and the good news is that upon dying the player loses only one power-up level. As for bonus points, most of them are gained by collecting the eggplants/aubergines.

Aubergines. It seems rather silly, I know. But in Game Tengoku they are the secret to higher scores. So much that the score achieved by killing regular enemies becomes almost irrelevant. Here's how it works: some enemies release aubergines. Every time an aubergine is collected the associated bonus points hover over it before disappearing. If another aubergine is collected before it disappears, this next aubergine's points will increase. By doing this repeatedly, the 5th aubergine will be worth 7.000 points, and as long as you keep collecting them before the points disappear every new aubergine that's generated when an enemy is killed will be bigger and worth exactly 46.530 points. That's why lots of simultaneous on-screen enemies (not necessarily aubergines) represent a huge potential for scoring. Larger enemies release big aubergines that split into 6 when shot, so getting them during a chain results in nothing less than 46.530 × 6 points.


Here's the insanely catchy intro for The Game Paradise! on the Sega Saturn
(courtesy of YouTube user kojiroh30)

Chaining aubergines requires some positioning knowledge, but mainly what it takes is timing. Breaking a good chain because you rushed and got them too quickly is disappointing. That's when the Sega Saturn release comes in handy, since there's a practice mode included in the CD. The problem is that everything in the game is in Japanese, making it impossible to know where you're going 90% of the time! Since I'm a generous guy, below you find a translation for it. You'll notice that Jaleco went beyond the ordinary and included an arrange mode as well: it plays just like the regular game but comes with 2 extra stages, including the one that has famous karaoke boss Misato, where you'll be fighting the lyrics from the song she sings. In this mode there's also an additional ship, the flying saucer piloted by Misato and Miki. Several challenging time attack modes are also present, as well as some exquisite special options such as the activation of auto-bomb or suicide bullets. Omake presentations and info on Jaleco previous games (all in Japanese) complete the package.

But wait! I'm not finished with the aubergines yet! As I said, successfully chaining them will boost the score considerably. But there's a side effect to that, and it relates to rank. My impression is that high scores are the main reason for the subtle increase in difficulty. Survival plays a role in rank as well, but not as much as scoring. One of the turning points for this can be verified when you fight the doll mid-boss in the 2nd stage, right after beating the teddy bear. Normally she will fire 5 spread round bullets, but when you get there with more than 3,2 million she will increase that number to 6 or 7, making it almost impossible to avoid the pattern. Fortunately the game gives away lots of bombs, and they have a very welcome panic function. The end of stage bonus is another great source of points, which are given for the amount of aubergines collected and current life/bomb stock. On a last note, the only extend is granted with 2 million points. 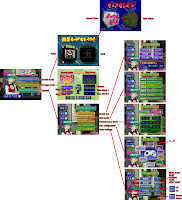 Click for a larger picture of the menus translation for The Game Paradise! on the Sega Saturn

This Saturn release is a must-have for all people who crave different yet challenging games, and also for those who have a special place in their hearts for anime-style shooters. The fact that it's so unkown and to a certain extent underappreciated makes it even more of a curiosity, and a charming one at that. Besides being a very good and fun shooter, The Game Paradise! also packs a great presentation, with a lovely intro that improves over the original one found in the arcade version. And from what I could gather, the sympathetic green-haired hostess from the game menus is also the owner of the hijacked arcade shop.

Below is my high score in regular arcade mode, playing on NORMAL until loop 2-5 (Z-Dyne). The 2nd loop seems to start with the same difficulty of the 1st loop, however evolving as if rank was being maxed out. 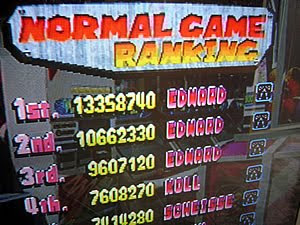 Note on the ISM final podcast: I don't know what happened, maybe MC Wilson had too much to handle during these last weeks and accidentally missed the report I sent him for the contest. I'm a bit disappointed but... Playing shmups is what really matters!
Posted by Edward at 8:12 PM