Panorama Cotton has several distinctions within the Cotton series of games. It's exclusive to the Mega Drive, it's one of the rarest titles for the console and unlike most chapters it eschews the horizontal scrolling and makes that cute little witch fly into the screen in an on-rails adventure, a concept that would be later revisited in Rainbow Cotton for the Dreamcast. Due to its rarity, Panorama Cotton is often hailed as one of the holy grails for Mega Drive collectors (especially if the teacup is included in the package), and is deemed by some as one of the most impressive technical achievements on Sega's 16-bit platform. In the past, whenever I thought about this I couldn't help but wonder if the game actually lived up to its hype.

A few days ago a had another go at the game, in order to relax a bit from the evil clutches of Master of Weapon and as a bridge between the first chapters and the subsequent sequels released for the Sega Saturn. I was also willing to top my previous 1CC high score, and I was able to get roughly a 10% improvement on it.

The greatest asset in Panorama Cotton is that it transports all gameplay aspects from the previous horizontal titles in the series to a frenetic, fast paced rail shooter scheme. Nothing is lost or neglected. Everything is there, from colored crystals and magic spells to the fairy sidekick that can be tossed forwards by holding the fire button. And let's not forget about the teatime shower bonus! 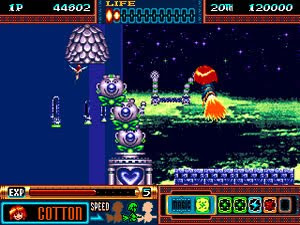 How did I end up on the outside?

With all things in place and having played it to the fullest, I feel obliged to say that Panorama Cotton is a bit overrated. I firmly believe that most of the praise the game gets, as far as technical excellence goes, is derived from people playing and being amazed by the scaling in the first stage alone. You see, as Cotton the witch approaches the ground and a rainbow-like river/road scrolls smoothly from inside the screen it's hard not to be impressed by the effect. The problem is that this is the coolest part of the game, and it is never topped or equaled for the rest of the following five stages. Sure they remain colorful, varied and filled with all kinds of creatures and obstacles, but the overall scaling effect isn't much better than what you get in other rail shooters in the system. One example is that I prefer the scaling results in Burning Force, even though that game doesn't even come close to Panorama Cotton in charm value.

So what we all have here is another cute adventure with the red-haired witch who's obsessed with those candies called Willows. It should please both Cotton fans and casual gamers/shmuppers alike, provided they don't expect the out-of-this-world experience many people make it out to be. Just like in previous Cotton games, there are lots of cut scenes with what seems to be very goofy Japanese dialogue. The music remains faithful to its roots, with upbeat compositions and at least a couple of stand-out tunes.

Shooting is pretty basic with semi-autofire enabled, in that pressing and holding the button will fire a short continuous bullet burst. If the button is held longer Silk the fairy is summoned and tossed forwards as you release it (this is a pretty useless attack by the way). The basic shot gets stronger with time and as long as you don't get hit, but it does power up faster if you get yellow crystals. All other crystal colors provide magic spells and are piled up in a 6-slot LIFO stack: blue activates a series of rotating orbs, red creates a homing dragon and green replaces the main shot with a series of missiles (avoid!). And here comes one of the major gripes of the gameplay... Crystals approach the character automatically if you stay put, but if you shoot them they bounce back and change colors - therefore, in order to get a crystal you have to stop shooting and stop moving, which is counterproductive both for survival and scoring (it's possible to get them while moving, though it isn't easy). Furthermore, lots of crystals on screen get really troublesome in busy sections because they stand in the way and block you from hitting enemies.

New to the gameplay is the selection of three scrolling speeds in the Z axis with the A button - you can't really move around any faster. Higher speeds can lead to a better time bonus at the end of the stage, but make dodging a bit harder. They're only mandatory as you chase the final boss in its last form, otherwise I recommend going slow all the time. As usual, you can score higher if you dodge all the teacups in the teatime bonus part, but here this is a lot more difficult to pull off due to the scaling effect not being really acurate. Strangely enough, teacups fall normally from the top during the last teatime shower... Why couldn't they have done this for all stages?

Panorama Cotton comes with a perfect length, with all five stages being comprised of various distinct sections. The game is on the easy side because there are initially 6 energy cells, and a new one is gained for every 50.000 points. Fun factor is enriched by nice touches such as direction changes that make you fly sideways/diagonally or a few parts where you're offered the choice to fly through alternate paths, complete with different graphics and enemies. Some transitions between different settings are awesome - I love the descent between the clouds in the last stage. Upon beating the game you unlock Silk as a playable character in both the main game and the score attack mode, it's just a shame that she's gone as soon as you power off the console!

And here's my 1CC high score on NORMAL: 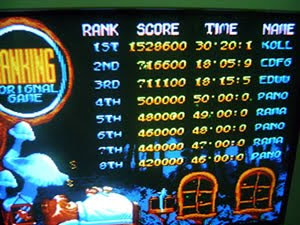