In shmup history, Compile stands as a company that’s both ditched by some and missed by others. Almost all of their shmups were extremely faithful to a very specific design concept, one that involves fast paced action and a plethora of weapons, but also very long stages/games and a presumed lack of challenge. Fan conflicts aside, I do enjoy variety in my shmups and I think Compile’s catalog is very much capable of standing on its own, even though I haven’t played it much. In order to fill this gap in my shmup education I finally decided to start my Compile journey by playing Zanac, for all purposes their first shmup released for a mainstream video game console.

Zanac was originally a MSX game, which was then reworked and tweaked for the NES. It established the whole feel most of Compile’s future shmups would have, but it is also a landmark for the NES itself due to the boldness of its programming: the game generates enemies based on which weapons you're using and how well you perform. This isn't quite like common rank, where the game just gets progressively harder as it unfolds. In Zanac enemies respond instantaneously to the player's actions - aggression level can reach overwhelming heights if you decide to take, for instance, special weapon 2. Most amazing is the fact that everything is so well done that there's practically no slowdown, in an excellent showcase of how to successfully design a shooter in such an early, theoretically limited platform. 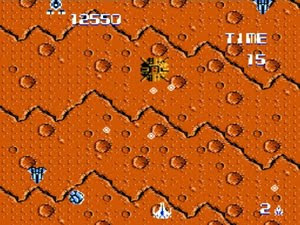 Is that cheese? Am I flying over the moon?

It will be hard to remember any of the graphical aspects in this game for a number of reasons. Even if the length of stages varies throughout, this is a long experience that can get tiresome depending on how it's faced. Graphics in general aren't elaborated, it's pretty much an endless series of open space landscapes with no obstacles and wide variations in color. However, they always scroll very fast, which adds to the feeling of intensity primarily provided by the AI. The music is much better represented though, with catchy tunes that kept my blood pumping for the action most of the time. Some of them are borderline epic!

So what makes this one of the best and most impressive NES shooters out there? Gameplay! Weapons! Intensity! Fair challenge! Zanac's ship can fire two kinds of weapons. The basic shot is upgraded by taking the so-called power chips from boxes that appear after a certain number of enemies is killed. The catch is that to achieve maximum power on the basic shot you have to hold on to the same special weapon. Changing it to any of the other seven special weapons resets the power chip counter to a lower level. Special weapons are numbered from 0 (default) to 7, and appear after destroying ground bunkers or special carriers that arrive from the top and hover on screen for a little while before disappearing. To increase their power you just have to keep getting the same number, and when you switch to a new weapon everything's back to the default level. Playing with all of them is mandatory to check which one suits best your style or serves a particular stage better - my favorites were type 7 (forward shot that bends slightly to the sides as you move), type 5 (back-and-forth energy ball that evolves into a mean piercing laser) and type 0 (yes, the default weapon is actually pretty decent). With the exception of type 0, all of them have limited/timed ammo.

As a rule of thumb, the more defensive the special weapon is the more aggressive the game gets. Special weapon 2 is hardly an option if you want to keep things safe and avoid death by sheer outnumbering. As if the game didn't have enough substance already, it also tosses in a respectable set of details and tricks that make a huge difference if you want to go the whole way and clear Zanac on one credit. These include stage warping, smart bombing, fairy uncovering (no, not like Raiden!), split-second invincibility windows and special enemies that allow for ways to power up faster. Figuring these out on your own could take ages, so my advice is that you head over to the great Strategywiki page on the game and read at least the sections about weapons and the walkthrough for the 1st stage. The hints displayed in these specific pages are invaluable and DO make a difference.

I feel that Zanac is one of those shmups that have a sharp gameplay turning point. If the player's competent enough to survive the first couple of stages and power up wisely, the initially steep challenge becomes perfectly manageable. It still takes a lot of effort in getting familiar with enemy attack patterns and better ways to deal with mid-bosses and boss fortresses (destroy the round turrets first!), but in the end practice and persistence are rewarded with one of the best shooting experiences it's possible to be had on the NES. Want more motivation? How about a very generous extend scheme? A first extend comes with 20.000 points, a second one with 80.000 points and then an extra life for every 80.000 points! Do you picture yourself having 40 or 50 ships in stock? Well, in Zanac you can! It's very reasonable to say that Zanac stands as as a true highlight of the 8-bit shmup era. In a nutshell, it's difficult without being unfair, you hardly notice any flicker, there's no slowdown of any kind, scrolling is smooth and hit detection is flawless.

Once the game is beaten it halts in the following screen until you press START. There's my humble 1CC high score! 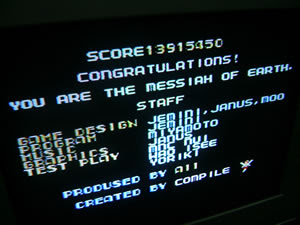