What are the impressions you get when you hear about a game called Metal Fighter? With such a name I thought it would probably be a badass crazy robot shooter, with beeps and clanks all over the place as you fight successive hordes of mechanical foes. The truth couldn't be more far from that, as Metal Fighter on the NES is nothing like it. According to the story in the manual, you are MCS-920 aka Metal Fighter, and as you return home from three centuries of intergalactic missions you get caught by surprise with an alien infested planet. Okay, now I get it! I'm actually a badass robot who needs to do some house cleaning even though my MF rank qualifies me for much grander and more honorable intergalactic missions.

Well, I guess that's a valid way to see it, right?

Metal Fighter is an unlicensed game, one of many that were made for the NES by infamous rogue developer Sachen. Surprisingly, the expected low quality aspects of such a product don't show up right away, since there's nothing really wrong or terribly off with the game. It is as generic as they come for NES standards, lacking any flair that could make it stand out (except for its cool name) and catering for masochistic audiences or bored people with no expectations whatsoever. I guess I'm a little bit of both in this case. 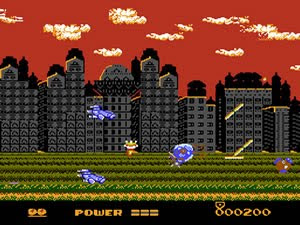 The first thing I noticed when I started playing Metal Fighter is the design of the main character. It's supposed to be a robot, but in my eyes it just looks like a bird. A big-headed humming bird to be exact. I guess the idea of playing a precursor do Sega 32X's Kolibri is what ultimately attracted me to the game. And this 8-bit bird is so primitive that it must first learn to fly before it can actually do something! The very first item released by destroying a weapon capsule is the letter F, which allows the character to take flight and relinquish the jump 'n shoot abilities he starts with. Therefore, when flying the second button in the controller (used to jump) is rendered useless.

In order to deal with all incoming threats, our bird is able to shoot left and right. He can charge the shot for a supposedly more powerful blast, but this attack has almost no advantage at all over regular firing. Further weapon capsules will release different kinds of items. S is for speed-up, while all others will send the hero to a separate room so that he can fight a clone robot for the rights of taking his weapon (much like the special robot fights of Atomic Robo-Kid). These weapons are: M for a short-range 360º multi-shot, D for a set of double straight lasers, L for a set of three bouncing lasers and U for an auxiliary orb that's placed above the character and fires an additional regular shot. Getting weapons M, D and L overrides the previously used weapon, and each duel against a clone restores one dot in the health meter. Getting the same weapons again won't result in any upgrade at all.

The health meter starts with three dots, which means you can take 3 hits before dying. There are 3 lives upon game start, and score-based extends are given for every 30.000 points. All of these amenities make for an easy challenge once you have figured out enemy patterns and how to kill bosses quickly. Due to the character's ability to shoot both ways, some of them can be slaughtered from behind, but it's important to notice that being touched by a boss means instant death. Another minor advantage on the player's side is that the upgrade orb placed above the character absorbs enemy bullets. And even though the game has checkpoints, they don't seem to send you any further back in the stage.


Oh my, why is it so damn hard to get that F icon so that I can fly?
(courtesy of YouTube user mistyfreak)

While noticeably poor overall, Metal Fighter can be mildly fun because it gets kind of intense in later levels, without being unfair. Graphics lack detail and enemy design is totally uninspired (with the exception of some bosses), but the existing parallax adds a fine dynamic characteristic to all levels, which take place in several different environments. This variety, however, isn't enough to avoid the game being repetitive. You have to endure the same eastern-flavored song for all stages, but thankfully it's not grating to the ears.

In my runs I came accross some bugs, such as all of a sudden not being able to fire the regular shot, or dying without being hit by nothing during a boss battle. Behold, at last some real traits of unlicensed material! Each of these bugs happened only once, so they weren't that critical. What's more disturbing for me are the total lack of score buffering and the fact that your health/score isn't displayed when you're fighting a clone or some of the bosses. Furthermore, destroying bosses doesn't give you any points, so the maximum possible score is the one you get prior to battling the 7th and last boss.

And that's the exact moment shown in the picture! 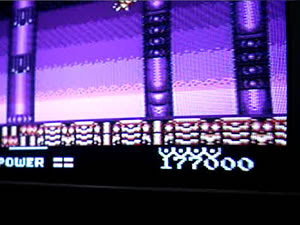