Oh my, the pleasure (?) of digging into obscure stuff... It's always a risky endeavor, for you never know where you'll be getting at. The world of unlicensed games isn't what we could call a superb exploration field, but once you start checking out stuff you can definitely expect to find in the least cool subjects for conversation. Sachen, one of the most prolific unlicensed developers for the NES, is often bashed and trashed by critics and gamers alike, and with good reason. After savoring the wonders of - aham - Metal Fighter and reading a bit about the company's history, I figured I could try another shmup made by them just to take advantage of this brief thrill of mine. And the chosen one was Papillon Gals, also known as Galactic Crusader in the US. 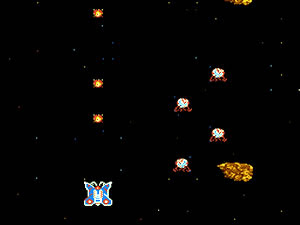 Godzilla prepare! I'm coming for you, you slimy überdeveloped lizard!

Papillon Gals starts out against a pretty basic background, and you'd better get used to it. All levels are just the same star-filled black void punctuated by little planets or meteors of various colors. Additionally, you'd better get used to the tunes on the first stage because even though the music fits the action well they just won't change for all subsequent levels. The good news is that these observations are the only criticism I have to say about the game. Papillon Gals is surprisingly fresh on the gameplay front, drawing heavy inspiration from two classics of the genre in order to deliver a fairly decent challenge rush.

Initially equipped with a single pea shot, the huge butterfly must destroy waves and waves of all sorts of enemies, and here comes its first influence: Galaga. Most but not all of the threats will arrive in several different formations, presenting danger both by shooting and by moving erratically on screen, and the influence goes even further with the same sound effects from Galaga's beeps and shots. The butterfly will shrink as it gets hit, reaching minimum size after two hits and dying on the 3rd hit. However, it will grow again upon grabbing the appropriate regeneration icon. Every time the butterfly is hit it also loses one power-up level for whatever weapon it's using. These weapons are changed by taking colored capsules: red (laser), blue (straight shot), yellow (revolving shot) and orange (wave). All of them have three levels of power, accessed by sticking to the same capsule. Taking a different capsule will activate the new weapon at its initial power level.

The second big influence of the game comes with the docking pod. And, of course, I'm speaking of R-Type. Sometimes a slow enemy will arrive - kill it and avoid the spiral bullets to safely collect the pod. This is when the other button in the controller becomes functional, as it can be used to summon the pod and detach it both up and down. This pod shoots an additional stream of bullets and also protects against incoming enemy fire, disappearing as soon as you get hit. It also has a second power level, obtained when you get the pod icon twice. A weapon winning combo for me was having a level 2 pod with level 3 lasers with a mid-sized ship (the big butterfly is too large to avoid the enemy onslaught).


A butterfly fights for peace in the galaxy!
(courtesy of YouTube user KollisionBR)

Who would have guessed that an unlicensed shooter could have such rich gameplay? On top of that, every stage has a unique set of enemies. Collision detection is very well implemented, slowdown only sets in during a few seconds in heavier parts and I didn't notice any flicker. The first couple of bosses are easy but they offer quite a fight later in the game - the overall difficulty isn't very high but it's not a piece of cake either (take advantage of the occasional 1UPs and the blinking invincibility capsule, it lasts almost 15 seconds!). You don't see your score while playing, but every killed enemy is converted into points after the boss is beaten.

And what of the hentai? You only start seeing it after you beat the 3rd stage. One lady will show up alone in a sexy position for half a minute (unskippable) for each defeated boss. And that's it. I just wish I could understand what they say in those word balloons... If you're able to accept the poor background graphics and the lack of music variety, Papillon Gals is definitely worth checking out. It's the best unlicensed shmup I have played so far, and I've played a few already. It's better than a handful of regularly licensed NES games and gameplaywise it ranks really well amongst the ones in the high tier.

And here's my 1CC high score! 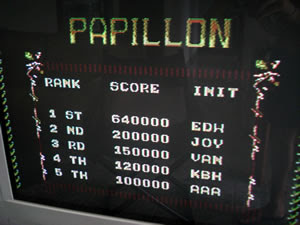