The FM Towns is a Japanese home computer released by Fujitsu in 1989. By the time it was still struggling in the market, in 1993 Fujitsu had the idea of launching the FM Towns Marty, a video game console based off the FM Towns hardware and compatible with most of its games. As both PC and console markets grew Fujitsu eventually dropped out of the scene, but its legacy remained thanks to a dedicated community of computer geeks and video game collectors. As you can see from this post, I'm a proud member of the second category, and today I conclude my appreciation of Rayxanber, an exclusive horizontal shooter whose sequels for the PC Engine CD are a bit more famous worldwide.

Rayxanber was, in fact, one the the reasons I eventually tracked down a FM Towns Marty (this "Marty" thing always reminded me of Back to the Future by the way). I guess I'm a bit too stubborn in my idea of playing game series in chronological order, so I had to begin where it all started. And since it runs on the first 32-bit console ever released, it was natural to expect some mind blowing orgy of graphics and sound. This isn't the case though, and it's probably due to the fact that the game was released for the FM Towns PC in 1990. It runs on the Marty due to PC-backwards compatibility. Therefore, as refined and put together as it is, Rayxanber barely exceeds what was being done graphically on the outset of the 16-bit generation. 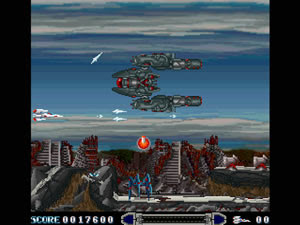 What to get next? The battle cruiser, the fireball power-up or the spider?

Fans of the methodical shmup school created by R-Type will feel at home with this game. Slow pace, exquisitely crafted stages, good music and... checkpoints. This concept is dead today, but there was a time where it was the cream of the crop in the shmup world. With the exception of stage 6, in Rayxanber there are two checkpoints per level. Fortunately, all stages aren't that long, and recovery is perfectly possible when you die. Of course it takes a bit of practice to get back on your knees, but here it never gets painfully unfair or downright impossible. Blame it on the weapon system, which despite its simplicity is very effective and has a charm of its own.

All you have as a default attack is a measly pea shooter, but a ship that looks just like yours and moves slowly from right to left releases colored power-ups when destroyed. These power-ups come with a dial that keeps turning and dictates how your special weapon will work when collected, that is, in which primary direction it will fire in conjunction with the pea shot. There are three of them: blue (ice daggers), orange (fireball) and green (lightning). Each color also provides a charge attack: blue will fire an 8-way dagger blast, the orange fireball will have a homing ability and the green lightning will turn into a powerful energy circle. You'll know when the charging is ready to be released by checking out the yellow status to the sides of the "dash" bar.

The function of this "dash" bar is obvious: it's there to compensate for the sluggishness of the spaceship. It's true that the fixed ship's speed suits the pace of the game really well, but there are times when a escape maneuver is definitely needed. The second button in the controller is then used for a dash displacement that accelerates the ship through a determined distance. Its use, however, overheats the engine, so there's a limit to how many times you can dash in a row, and this limit is indicated by the "dash" bar.

Much of the game's design is clearly inspired on Gradius, especially the bosses and their core weak points. All stages have very unique settings that range from wide open space to considerably claustrophobic challenges. The 6th level, for instance, is only a moving maze of seven square blocks trying to crush you. Enemies are presented as an alien race formed primarily of insect-like creatures and organic battleships, frequently arriving in formations that try to overwhelm the player. As for the soundtrack, it's equally diverse and definitely got me in the mood. Just like in all games of its kind, memorization and good positioning are of utmost importance if you want to succeed, as well as a good knowledge of how to effectively use the special weapons (trust in the great homing ability of the fireball!).

Rayxanber is a delightful rarity that will definitely please old school shmuppers, even with its tiny flaws. One of them is that the play field doesn't take the whole screen area - it doesn't bother after a while, it's just weird in the beginning. Another issue is the milking possibilities made available by one of the checkpoints, which unfortunately breaks the scoring system. When fighting the 7th boss you can get points to no end by destroying its several side turrets. Since it's only vulnerable during a split-second between his different turret arrangements, hitting him by accident is nearly impossible. The first time I reached him I think I battled for 10 minutes straight because I didn't know how to take him down. He's a cool boss though, I like to think of him as one of those high noon wild west duels. One bullseye shot and he's gone!

There are absolutely no options in Rayxanber. What you see is what you get: one difficulty, 3 starting lives, one extra life for every 50.000 points and unlimited continues for the sake of practice. So here's my 1CC high score: 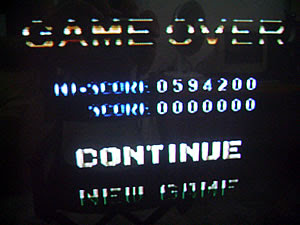