It was a sunny and lazy afternoon when I turned on the Xbox 360 at mommy's. I was a bit weary from getting my butt kicked by Divine Flow in Judgement Silversword, so I decided to cool off and sample something from the shmup buffet of the titles I had downloaded. That's when Space Invaders - Infinity Gene found its way into my routine during the final days of my vacation. Released first for the iOS, the game later appeared both on PSN and on Xbox Live, reportedly with a few enhancements. My guess is that Sony's and Microsoft's versions are identical to each other, so the experience on PSN should be the same.

Infinity Gene suceeds the Extreme iteration of the formula, but it doesn't follow on its footsteps. Surprisingly, it seems to take a few steps back towards the roots of the series while at the same time taking a whole new direction. Minimalism sets the tone, with evolution as the concept behind the entire game design. Imagine the first, primitive Space Invaders developing into a more elaborate game stage after stage, those few tiny enemies being joined by a massive fleet of outer space creatures that will eventually try to kill you in high definition 3D renderings (which fortunately still move over a good old 2D plane). It feels fresh and it certainly delivers as another much expected innovation within such an old, somewhat tired franchise. 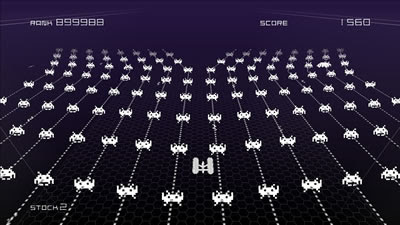 Infinite invaders taking over the galaxy

However, my opinion is that the biggest innovation isn't really in the design. Finally Taito allowed the ship to move everywhere in the screen, ditching the fixed dodging and opening the doors to a flexible chaining system! The core gameplay remains unchanged: a lone ship and a single weapon, which can be powered up by taking the DNA-shaped vitamins left by flying saucers - for those who've seen it, they look just like the newalone power-ups from Metal Black. But alas! Regardless of how many DNA the ship absorbs it will never reach a substantial amount of firepower, and that's the oddest design decision in the game: if the whole theme revolves around evolution, why doesn't the player's ship evolve accordingly? What you get is just a sprite makeover and small increases in shot power and autofire rate. The enemy's fleet, on the other hand, will evolve continuously. Maybe that's the point of the game actually, they're the most adaptable to change so they should survive, yet your mission is to prevail over them and achieve victory in the end.


On the player's side, evolution takes place differently. Completing successive levels will unlock extra weapons, features and BGMs to be listened out of the game. These extra weapons become available for selection when starting a credit, but be warned that you have to stick with it during the whole game. It's not possible to change it, and this was a serious letdown for me since I always played with the stock/default weapon, the one called "rapid". Practically no evolution for me...

From the initial ordinary ship in stage 0 you begin stage 1 already evolved with the weapon you have chosen, dealing with some invaders in different formations against a monochromatic background. There are five stages to complete, every stage has 6 sections and starting from 1-6 all of them have end bosses. Every 6th section comes with a main boss, and stages themselves get longer and more complicated. By the time you reach stage 5 most of the larger enemies are modeled in 3D, with backgrounds and obstacles shifting all the time, as well as various degrees of screen tilting. Fans of the franchise are in for a treat, since the game is populated with all sorts of invaders in the wackiest possible formations and sizes. All levels have names, as well as most of the larger enemies, which shoot lasers, bullets and beams while moving in lots of different patterns. Those ominous gigantic UFOs are very cool, but my favorite boss is the one called Hornet (the huge cube that you have to dismantle).

Chaining works according to a basic principle: kill enemies in succession to increase a multiplier. The chain meter is shown below the score counter, and whenever it starts blinking it means you should kill another enemy/bullet soon if you don't want to lose it. It's just like a more forgivable DoDonPachi chain (note: you do more damage by shooting without moving, because in this condition the firing rate is higher). Another scoring hint is the Nagoya attack, which consists of moving the ship amidst enemy bullets soon after they are fired, during a period where these bullets don't harm the player (they are colored in gray). Each Nagoya attack is worth 3.000 points.


Space Invaders - Infinity Gene is mostly an enjoyable experience. The soundtrack will please those who dig electronic music, but those who don't will not get annoyed by it at all. As for the game, minor problems appear as you start to play and chain more often, such as cheap deaths (enemies lure the player into a situation of unavoidable failure), foreground/background confusion (it's common to crush into a wall without seeing it) and a few lengthy sections with no action at all, which break the pace of the game and make it seem even longer than it already is. I didn't grasp the Nagoya attack at all, sometimes you get none when you try it, only to achieve more than 30 Nagoya attacks in the very same place afterwards. Since the game gives you only 3 lives with no extends at all, Nagoya attacks are quite a risky maneuver when you're aiming for the 1CC, so I avoided doing them.

Besides Normal mode as the main game there are also additional modes called Bonus, Challenge and Music. Bonus mode is just a collection of a few additional stages (unlocked by playing Normal mode), Challenge mode is comprised of 99 stages that are randomly generated and in Music mode stages evolve according to the music from any playlist saved in the console. It's possible to replay any stage you've already reached in most of the modes, which is great for training, and if you're online you can track how well you're doing in the global leaderboards through the dynamic "rank" display on the upper left corner of the screen.

My 1CC run was done in full defaults on NORMAL, so I played with the "rapid" weapon type. It's a pity that the leaderboards allow no distinction between weapons, I would love to know how I stand when compared to other "rapid" users instead of all those "field" whores who occupy the highest ranking positions. Further difficulties are unlocked by completing the game in the current higher setting (continues allowed). 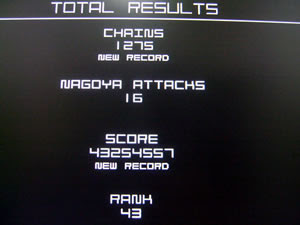