On the matter of unique shooters, Viewpoint certainly deserves a nod as one of the most interesting ever developed. Bearing a striking resemblance with Sega’s classic Zaxxon, it makes things more simple by restricting the playing field to a 2D plane only, presenting itself as a genuinely “tilted” top-down shooter. Whereas Zaxxon allowed full displacement in three axes, in Viewpoint the gameplay remains strictly two-dimensional, as if you took your regular vertical shmup and bent it in order to achieve a pseudo 3D feel to everything. Probably the most famous isometric shooter besides Zaxxon, Viewpoint was originally conceived for the Neo Geo hardware but also received a good number of ports in other systems, such as the Mega Drive, the FM Towns, the Playstation and the Sharp X68000.

Of course the Neo Geo AES version is the arcade experience at home, and my first choice to try this much anticipated classic. I have fond memories of staring at game magazines back in 1992 and wondering when such an awesome-looking game would grace my eyes for real. The time has finally come, and in my opinion it totally lives up to its hype. After all, it’s got fascinating design, an excellent challenge level and spot-on controls – the aspect I feared the most before actually playing the game. I always thought it would be tricky to control the ship in such an unusual perspective, but I was actually surprised at how good the Neo Geo stock controller performed. It worked like a charm, absolutely no autofire needed. 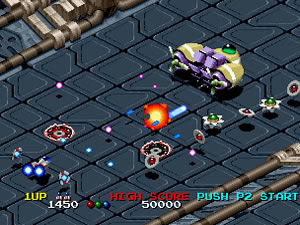 This is isometric shooting action at its best

Hovering just a little bit above the ground and gliding along surfaces with the most varied textures, the ship in Viewpoint faces all sorts of enemies. In fact, the enemy gallery in this game embraces all kinds of weird design choices, contributing to deliver a rather trippy ride through all six stages. Popcorn stuff comes in wave formations and consist of spinning discs, little insects, tiny blocks, destructible rocks, small planes, etc. Then there are the larger creatures, such as weird propellers, giant wheels, spring toys, big fish, snakes, turtles, maggots, insects, tanks, mechanical walkers, etc. Several types of turrets will also materialize all over the place. Bosses are always huge and mostly comprised of several forms: there’s a worm, a crab, a moth, a large hovercraft, an evil skull and an undescribable creature as the ultimate enemy. There’s always one weak spot that should be exploited when fighting bosses, and that’s the first indication of the advantage related to using the charge shot.

The only upgrade available for the main weapon supplies the ship with a pair of side pods/options that fire two auxiliary shots and have the ability to block bullets and damage enemies. It’s always the first item to appear from the one of the carrier circles. Holding down the fire button for a brief while and releasing it produces a charge shot that besides inflicting more damage is also capable of destroying several smaller enemies in a row. There are instances where tapping the button for regular fire is better, normally against a flock of enemies arriving from different directions, but using the charge shot wisely is the key for better results and faster kills.

Special weapons come in three forms: the fire wall (F - red), the shock wave (W - blue) and the homing missiles (H - green). You can stock three of them, and if the stock is full the next special weapon will replace the oldest one. They’re all equally useful, and since there’s no special bonus whatsoever for life/weapon stock, there’s no need to be stingy with them. Remaining items released by carrier circles can be a shield and a star. The shield changes its color as the player gets hit, protecting the ship against two bullets (enemy contact is always fatal regardless). Stars are the secret to score higher, and collecting them without dying makes their value increase up to 81.560 points each (500 > 1.000 > 3.310 > 5.000 > 10.000 > 33.100 > 50.000 > 81.560). Most stars appear by killing specific enemies or full enemy waves, and some of these waves can be triggered by fulfilling certain actions. The best example is the rotating blockade in the middle of the first stage: destroy it and an extra popcorn wave will appear to the left, for which a star will be won if you don’t let any of them escape. Enemy waves may also release special weapons in certain parts of the game.

Though it’s possible to milk bosses for their cannon fodder, this is highly discouraged because these beasts are quite nasty in their patterns, there’s no such thing as safe spots and the star bonuses are much more attractive. Extends are given with 50.000 and 80.000 points only, with a single 1UP to be grabbed in the last stage (the golden sphere amidst the lightning poles).

I enjoy the visuals in this game a lot. I can definitely see an overall emphasis in an insect theme, even though I can’t say that would be the main design motif. The music in Viewpoint is a chapter of its own, with a remarkably groovy, funky, offbeat soundtrack that’s both relaxing and awesome at the same time (baby!). Regarding the gameplay, there’s actually a reason why the ship seems to be a tad slow. With the exception of the bullet spreads from larger foes, all enemy bullets are aimed. Constant movement is paramount for survival, and combined with well placed charge shots and a few intense albeit short tapping bursts it makes for a nice approach towards the apparently daunting difficulty of the game. There is no rank, so every enemy pattern will always be the same. One thing I noticed is that it’s always better to escape enemies that chase you by doing lateral moves instead of forward/backward evasions (the centipedes, the fireballs from the third boss, the flame rings from the last boss).

Besides the design excellence, Viewpoint has flawless hit detection (nobody can blame the perspective for dying), an outstanding lack of flicker and only brief spells of slowdown when the screen gets too cluttered with moving sprites. It's a mandatory title for every serious shmupper out there, and deserves a place of honor as one of the defining games in the Neo Geo library. From the videos I've checked the Neo Geo CD iteration is basically the same as the cartridge, except for the loading times and seemingly more slowdown. Contrary to what one would expect, the music is no step up from the original though.

In the high score below I died before the 5th boss, playing in the MVS difficulty setting without autofire. I guess some of the star bonuses I lost were compensated by a few failed attempts at defeating the final boss, but I'm satisfied with this score for now. 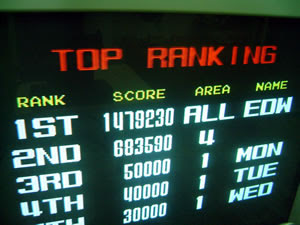