Though the name might seem a bit strange some people may already know Scavenger 4 because this game is none other than Novastorm, also released for the Sega CD, Playstation, Panasonic 3DO and PC (MS-DOS). I like both names equally, they’re cool and evoke something along the lines of a badass sci-fi suicide mission. Scavenger 4 is actually the codename of the ship you pilot, and is even mentioned in the opening of all other versions. It's the last hope of mankind in the quest to destroy an evil computer that gained intelligence and has taken over several planets in the solar system.

Scavenger 4 is the natural evolution to Microcosm, which practically pioneered the use of full motion video (FMV) as the basis for video graphics with instant action, which is a lot different from the more famous uses of FMV in interactive games such as Night Trap. Scavenger 4 changes the original formula a bit by ditching the inside-the-cockpit view and allowing the player to see the spacecraft as a whole, thus turning the game into a genuine rail shooter (the Sega CD version of Microcosm does this as well, unlike the original FM Towns game).

One interesting detail about Scavenger 4 on the FM Towns is that the lengthy intro animation has English dialogue with Japanese subtitles, probably due to the fact that Psygnosis was a UK based company. It’s always great to see developers taking the next step and dipping their toes into foreign enterprises, so I salute Psygnosis for doing that, regardless of financial success or legacy. 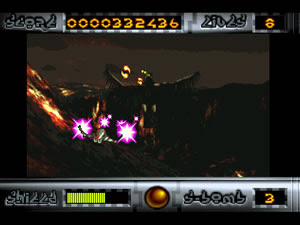 In line with the purity of the genre, basic inputs are pretty simple: shoot and bomb. While there's no continuous autofire, for each press of the shot button you fire a concentrated stream of bullets. Intricacies appear in the way power-ups are handled, in timeouts during boss encounters and in the way FMV is used to create obstacles that must be avoided. It’s important to mention that even though the main animations and stages are the same, each version of Novastorm/Scavenger 4 has specific details on gameplay that make them all different from each other. Sprites for bullets, different mid-bosses and power-up schemes were generally altered from one version to the next, so the experience never feels exactly the same even though you’re playing the same game.

The four stages take place in different planets with their own specific motifs: fire/lava, desert, ice and enemy headquarters. Each stage is divided into four sections where you fight three mid-bosses and a main boss, with a series of enemy waves in between. Prior to each section every boss is presented with stats on their firepower and additional info such as estimated time of arrival (ETA), which is rather cool. Brief FMV animations are seamlessly inserted within and between the sections, showing a little more of the environment and the enemies and providing a cinematic feel to the whole game. The only problem is that it’s impossible to skip them, so if you’ve seen your share already and want to speed things up you just can’t do it. There’s also the fact that all cut scenes shown between stages are completely silent. We all know outer space is a vacuum void, but a little music wouldn’t be that bad, would it?

All items/power-ups appear at predetermined points in the game, floating for a few seconds before disappearing. Sometimes the game will confuse the player by throwing four items at once. Not all of them are that useful, so you must be fast to choose the best possible option. There could be some randomness in how a few power-ups are granted, but in general they will all come in the same order for every credit you play. Regarding firepower, the available items are: double shot, triple shot, 3-way split shot, 3-way spread shot, wave shot and cannon. Temporary options come in three flavors: trailing, rotating and side/homing. Unfortunately they last only for a little while and revert firepower back to the single shot while active. The same applies for the temporary invincibility. The remainder of the items are speed-ups (S), extra bombs, shield recovery (+) and 1UPs.

It takes a while to get used to the power-ups. Not only are they initially hard to be distinguished, but they also vanish pretty fast. The fact that you get to preserve your weapon once you die is a good thing though. It kinda compensates for the traps the game sends your way, such as making you get rid of a good weapon by suddenly throwing an item for the default single shot. The best weapons are the triple shot and the wave shot. Bomb stock is reset to three if you die, so bomb away if you’re about to be toasted. This way you might just be able to kill the boss and preserve the current life, since the shield gets fully replenished for every section you beat.

Scavenger 4 isn’t that hard for a rail shooter, and that makes it a pretty fun game to get started in this subgenre. There are no continues, but steady progress is somewhat guaranteed by a generous number of 7 lives by default and a scrolling framerate that's smooth as silk. Once the shield is gone you’re respawned right where you die, however there's one type of death that sends you back to a checkpoint. Though it’s not shown anywhere every boss fight is timed, and if you take too long to kill them you'll die in a glorious cut scene and get sent back to the start of the section. Boss damage can be checked on the middle sphere in the lower HUD, which starts red but evolves to green as you land successive hits on the boss's weak point. If the sphere is blinking green then you know it's about to die.

Vertical movement can be inverted and the balance between sound effects and music can be adjusted in the OPTIONS. With no other relevant tweaks available, the game is pretty straightforward in its presentation. Gameplay is fluid but can get on your nerves with obstacles that seem to suddenly shift direction (it’s often safe to be at the dead center to avoid taking too much damage). The dark undertone is counterbalanced by the music, which leans towards techno but still manages to have a quirky uplifting charm, especially during the first couple of stages.

When I got the 1CC score below I was in the last shield bits of my last life! 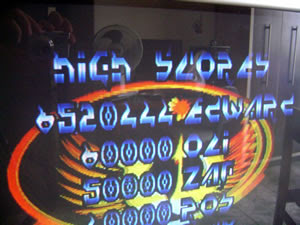