Warning: this post will sound an awful lot like a rant. I know this impression might come as unexpected, given the fact that the port for Dodonpachi on the Playstation is considered by many people as the superior one when compared with the Saturn's. And it is indeed, at least on visual merits (slightly). But for those with the willpower to scratch beyond the surface and dig deeper into the intricacies this pivotal shooter has to offer, PS1 Dodonpachi disappoints. You don't even need to be a high tier player to be sorely let down by this particular version.

But first let's recap how the classic DDP gameplay works. Expanding from the initial ideas presented in Donpachi, Dodonpachi preserves the three original ships, endows them with new abilities and greatly refines the scoring system while boosting the action levels considerably. For each ship you now need to select shot or laser power (S or L), a choice that emphasizes the efficiency of the chosen ability, whereas bombs behave differently if you're using laser and shot (or not shooting). That's all most people need or care to know if they're merely looking for some intense shooting fun, to which this version of Dodonpachi caters to wonderfully.

On the other hand, dedicated shmuppers know that the key to scoring in this game is its famous (or infamous) chaining system. The basic idea is to hit enemies in succession in order to keep the chaining bar alive and see the chain meter rise for higher and higher scores. To keep the chain alive on stronger enemies you need to make contact with them by using laser. Perfecting routes to achieve longer chains is the main objective of anyone aiming at scoring higher, but that also works to grant access to the second loop, an extra reward/challenge that requires a few hard-to-achieve feats during the first loop. Get to the end of the second loop and face Hibachi, Dodonpachi's true last boss. 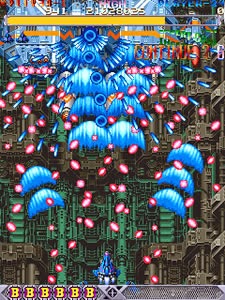 There’s no denying that Dodonpachi feels like a fireworks display during most of its six stages, after all the game is packed with an extremely powerful vibe and loaded with all sorts of bullet curtains. Dodonpachi is a thing of beauty, and my primary impression when I played the PS1 version in TATE was excellent. But then I noticed something was off on my TV. I could not see the leftmost border of the screen, which includes part of the life stock and the area that shows the chain gauge. What does that mean, exactly? It means that without being able to see the chain gauge it’s impossible to properly sustain a chain; after all, you need to know when the gauge is about to deplete in order to time your next kill. I tried running the game on a different TV, but I still couldn’t see that essential part of the screen.

A few days passed and I decided to revert back to YOKO on my bigger TV so that I could see what I was doing. The cramped resolution was a bit shocking (it’s hard not to get spoiled by TATE), but I was willing to take the hit in exchange for the ability to properly chain. By that time I was trying to come up with a good route for stage 2 with ship C-S (blue one, wide shot), but I was having many problems to keep the chain. I thought it shouldn’t be harder than with A-L, which I had done before on the Sega Saturn, so I decided to do some research. Then I read that this particular version of Dodonpachi screws up chaining by blocking bee uncoveries from filling up the chain gauge. I didn’t figure that out for myself, but I did confirm what the best Western DDP player stated in this clarifying text.

And down the drain went my strategy to access the loop, specifically the requirement of a 330-hit chain with the C type ship. So what to do next, play in YOKO and chain as best as I could or stick to TATE for the sheer “fun” of it, screw chaining and all? I chose TATE. Even though my intention was to absolutely detach from chaining, I must confess that it wasn’t easy at all. So I would often try to chain blindly, only to risk dying or angering myself for letting those huge combo numbers change colors in the midst of a particularly easy bridge. I switched to the B ship (the helicopter), first with Shot and then with Laser. There’s no point in using Shot unless you’re playing with type C or if you’re pursuing an even harder achievement.

Minor differences from an arcade source, such as the ones pointed by Prometheus in his aggressive rant linked above (game speed, enemy placement, enemy resilience), have no bearing at all in my appreciation for any given console port. I’m no arcade purist, and I believe we as players must adapt to the challenge imposed by the game in front of us regardless of its origins. However, given all the issues I was facing with Dodonpachi on the Playstation, there came a point where I was on the verge of hating the game. That’s why I finally decided to play it leisurely, as if it was a total stranger instead of a close friend/enemy – a status that most shmups achieve when I’m about to beat them and reserve a good amount of time to do so. I had even given up on the bee requirement for the loop (all bees in at least 4 levels), so I’d spend weeks without playing the game on the faint hope of getting the 1-ALL at some point on a relaxed, maybe alcohol-splashed credit.

Knowing that such a good-looking port is that much of a wreck is one of the saddest realizations I had since I started dedicating myself to the genre. Never mind the little annoyances of this version, such as the inability to choose different ship types when in TATE (you need to select the ship in the Options, limited RAM is to blame) or the addition of a special button to induce heavy artificial slowdown (really?). You can also toggle a Wait function whenever you pause the game to mimic the arcade slowdown, but that’s not really meaningful unless you’re facing the most dense patterns from bosses.

The controller layout I adopted was shot on ×, bomber on ○ and full auto on R1. Credits are coined with the SELECT button, all inputs are configurable and auto save can be properly turned on. And below is my shameful 1-loop clear of Dodonpachi on the Playstation with B-L, Normal difficulty. Which brings me to an awkward challenge that just crossed my mind: how low can you get when going for a DDP clear? And I don’t need to state my final verdict on which 32-bit port is better, do I? 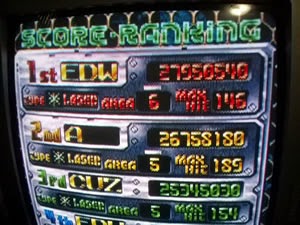 Next: Dodonpachi Daioujou on the Playstation 2.
Posted by Edward at 11:36 PM