For a video game, being boring goes hand in hand with me being bored. Lately that's something I'm starting to firmly believe in: you have to be bored to some extent to play stuff like Magic Carpet 1001, an unlicensed horizontal shooter that perfectly fits the bill as a boring video game. Half an hour of shooting boredom was enough to see the end, and nothing changed about the general idea I have towards unlicensed games. I get the impression that this one caters to the sensibilities of children because of the arabian setting and the idea that you control a kid with a bow flying a magic carpet. Therefore it must have garnered a mild degree of exposition and success in the more underdeveloped corners of the world (it supposedly came out in 1991), even serving as the basis for a late Harry Potter-themed hack.

Gluk released the game in Europe under the title La Alfombra Magica (The Magic Carpet) without changing anything in the game itself. It still shows Magic Carpet 1001 in the title, and the instructions are printed in the back of the box instead of coming in a proper manual. Mega Soft, the original developer, was well known for its activities with unlicensed software, and apparently made no effort to stop the game from spreading in different ways throughout the market. Later on the game appeared in a 6 in 1 multi-cart published by Caltron, as well as in pirate cartridges under the alternative name Aladdin 3. Just like many other NES unlicensed shooters, all "official" releases of the game are quite rare. 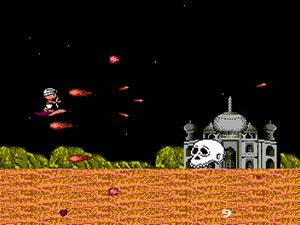 A shadowy battle against the third boss

Deserts and outer space are the only backgrounds you'll see across the four stages of Magic Carpet 1001. There are no obstacles in sight so feel free to move all around if you want. Also feel free to refrain from shooting if you have no turbo controller and you're too tired of pressing the button like crazy to get that puny rate of fire provided by the character's bow. Why not shoot, you ask? Actually that's not the right question, for the game has no scoring system. I'm an adult now so I'm in my right to complain, but I assume I would take it for granted if was an innocent child. An unrelated example: I was deeply disappointed to find out, after all these years, that Decap Attack has no scoring system either... How picky do we get when we get older, huh? As with a handful of other cases, seeing the end is the only motivation you'll ever have to play this game.

Upon start it's only possible to shoot one arrow at a time (button A), but better firing rates and a three-way shot will eventually be available by taking successive P items. These power-ups are released randomly, just like speed-ups (S), extra lives and health hearts. Each heart allows the character to avoid instant death by granting 4 extra defense hits against bullets and 2 defense hits against enemy collision (a single heart is displayed on the lower left side of the screen, regardless of how many you've already taken). Dying strips the character off one power level, that's why collecting lots of hearts is important to survive difficult parts and quite essential if you get to the last boss, a disappearing Parodius-inspired mouth that fills the screen with bullets. Interesting information taken directly from the "manual": if by any chance you're lucky enough to get the treasure from the magical lamp in the last stage you become invincible. My guess is that this "treasure" is somewhere inside one of those enemy formations shaped as a big heart - you'll know you're invincible when the character keeps blinking non-stop. Talk about a cheap way to grant a free passage against the last boss!

Another unexpected tip given by the manual is that you can increase the "energy" by pressing SELECT + B. That means the shot power is increased to its maximum level, but in order to accomplish that the main shot button (A) must also be pressed. Even though it seems to be a good idea, pushing all these buttons at the same time isn't comfortable at all.

Only a single song is used on all stages, and the bulk of the enemy gallery is comprised by insects, ninjas, birds, bats, rocks and meteors. It's a complete thematical mess given the middle eastern setting and the misleading opening screen, but at least it's a rather colorful one. Incoming bullets are on the slow side, and provided you don't allow enemies to live long enough the game never gets overwhelming. Regarding bosses, prepare to face a witch, an alligator in a flying jar, a skull and the aforementioned outer space mouth. A curious note: the death animation is taken directly from Toilet Kids, and the hero sprites seem to be a rip-off from one of the characters in Doki Doki Panic. We all know, originality is a trait often reserved to licensed games...

Without incurring in any disastrous aspect but an uneven distribution of power-ups (hit detection is okay, gameplay isn't compromised by the character's large hitbox, no jerky scrolling), Magic Carpet 1001 is a miserable but playable oddity. The lack of scoring is a shame and further cements its underground, collector-only status. It seems War in the Gulf (one of the other three NES unlicensed shooters by Mega Soft) shares the same fate, but that's something I can't and I'm not willing to figure out right now.

I had the honor of savoring the game in its Gluk incarnation, La Alfombra Magica. The ending sequence halts at the screen below after showing the reward given to the kid flying the magic carpet. Patrick, Julia and Ruth, thank you for half an hour of NES obscure shmup history. I won't thank Martino because he was already thanked. 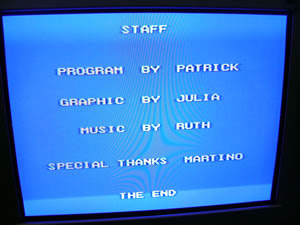