Witnessing the dawn of a new video game system must have been the shit back in 1988. The expected leap in graphical and processing quality of the Mega Drive was meant to provide a much better gateway for more faithful arcade ports, but just doing ports wasn't enough in a few cases. Launch titles needed a punch so Space Harrier received a direct sequel instead of a conversion. As such, it develops over the ideas of the arcade game and provides new enemies, bosses and music to another adventure on the "fantasy zone". Never mind the fact that the story takes place in the "fantasy land" this time around, but who cares anyway?

As a launch title Space Harrier II was certainly able to showcase the power of the new video game system, even though it isn't as technically impressive as the original arcade game. On the outside it seems just like it, but the dubious attempt at providing scaling effects on a console that wasn't designed for it and the reduced frame rate are proof of the inevitable gap between both platforms. Yet the game is fun enough to warrant some involvement for those who liked the first chapter. After all, it isn't anything close to what happened to Thunder Blade's sequel Super Thunder Blade, one of the other launch titles for the Mega Drive. 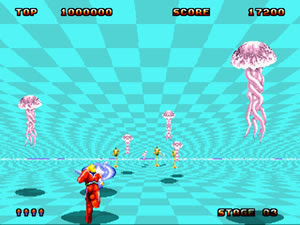 Harrier has the same abilities of the previous adventure, running and flying around with his plasma cannon over colored checkerboard grounds. Every now and then another checkerboard surface will appear above him to provide a slightly clausthrophobic experience. After areas 4 and 8 a new bonus stage appears: for obvious hardware limitations Falkor is gone, replaced by a hoverboard while the hero destroys harmless seashells and dragons. The last stage (13th) brings back the boss rush and presents the most visible improvement on game variety: all bosses are preceded by their names and a final enemy awaits, the Dark Harrier.

Despite having less stages than the first game Space Harrier II gives the impression of having the same length. Challenge level is a completely different story though. Every time the player scores 1,5 million points he/she receives an extra life. That's an awful lot of extends in the long run, which definitely helps everyone to beat the game and read its backstory (in a weird move Sega decided to reveal the in-game storyline right before the end credits instead of showing it up front). Space Harrier II also comes with more empty room, even during the heavy parts with lots of pillar barriers. With a lower number of sprites and enemies on screen, the overlapping of incoming waves isn't as frequent. When this happens the game's frame rate rears its ugly head and leads to painful deaths - the pseudo-scaling is far from perfect, and you often wonder why an enemy that was far from you suddenly hits you in the face. The golden rule for old school rail shooters still applies: provided you have room, keep moving and you won't get hit.

A good portion of the hazards in the fantasy land are new, and some of them are just simple sprite rearrangement. Bushes became seashells, for instance. Small spaceships, trees, orbs, robots and rocks are back, joined by toads, dragons/gargoyles, knights and flying men, among others. Tiny extra details such as the lightning that strikes the background prior to a boss's appearance or the Harrier's departure from inside the cockpit of a spaceship are unique to the sequel. They don't add anything substantial to the game, but it's still nice to see that Sega put them in. Contrary to what I would've expected, the most controversial aspect of the game is the music. Blame it on the BGM for the first stage... It goes a little bit against the atmosphere. Later on the music gets better and starts to resemble the first game, with some good new boss themes to boot. The famous voices for the character's death (AWWWWW and GET READY) are back.

Space Harrier is back into action!
(courtesy of YouTube user FMFlameNinja)

To access the options press and hold A at the start screen. There it's possible to activate autofire, a feature that may not be that helpful at times because the Harrier's rate of fire is limited to bursts of four consecutive shots. This becomes a problem in the busiest areas of the game, since it's quite common to get rammed by enemies who are right in front of your autofire-enabled plasma cannon and should've died already. Getting killed this way is probably the most annoying thing about Space Harrier II. Difficulty selection alters the extend interval: 1 million points for the Easy setting and 2 million points for Hard. The game itself plays the same way in all three difficulties. Upon start the player is allowed to choose the initial stage by pointing to the sides while Harrier looks at the horizon and the stage name is displayed on screen. You still need to play all other stages before going to the final boss rush though.

Die hard arcade lovers may look down on Space Harrier II and label it as a lesser and useless effort, but in the realm of sprite scaling rail shooters it's really not that bad. Heritage surely helps in its appreciation (it does for me), as well as the watered down difficulty that sets it apart from Space Harrier (which would receive a proper port for the 32X add-on more than five years later). I wish there was some kind of bonus for a large life stock at the end of the game but there isn't, so there's no need to worry too much about losing lives while getting there. My 1CC score on the HARD difficulty is shown below. 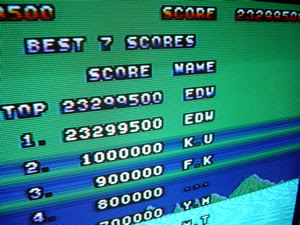