For all purposes Varth – Operation Thunderstorm can be considered an offshoot of the 194X series, one of the most emblematic series in the shooter genre. Points in common are the biplane protagonist, colored wave formations bringing power-ups and a very long game campaign with nothing less than 30 stages. The main departure from the old formula is the concept of using auxiliary “pods”, an idea that echoes somehow in Taito’s Grid Seeker. Full of detail and as tricky as it gets as far as a Capcom shmup goes, Varth is a beast of a game that definitely exists to teach players the meaning of failure. That is, until you conquer it and get the Ryu shower in the end credits.

Excluding the PSP compilation, the only port on home consoles is included in the second volume of the Capcom Classics Collection, available for the Playstation 2 and the Xbox. Even though the PS2 version lacks a TATE option, the game itself is virtually a perfect emulation of the arcade original, down to the inherent slowdown (based on my experience with MAME). If you’ve got a big TV set there isn’t a single reason not to play it on Sony’s console. The only note I can share to make it a better experience is that I had to reduce the contrast and color levels to improve visibility – for some strange reason the game appears to be more colorful than usual.

There’s a natural thematic progression in Varth, which starts on the city and evolves through skies, harbors, ocean, deserts, forests, railways and several different bases. The game throws every sort of enemy one would expect from a war themed title: tanks, planes, choppers, turrets, trains, ships, lasers, walls, missiles, bombs, flamethrowers, smoke, storms, sand storms, enemies coming from behind, huge bosses and secrets. Lots of them, to be exact. Varth can be made even tougher than it normally is if the player wants to take risks and find the goodies. Since the campaign is a long one, figuring out the secrets is also half the fun, so for most players it’s not just a matter of coming up with the best route to be followed in order to merely survive. 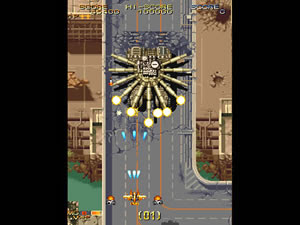 Finding the weapons that suit you best is the best thing to do as soon as you start playing. The three main weapons are switched with dedicated icons: machinegun (starting weapon), wide shot or laser. The pod icon cycles between three choices, and taking it activates the pod while giving/upgrading the auxiliary firepower as missiles (M), homing (H) or napalm (N). Pods provide protection against all incoming regular bullets and can be either smart (they have a life of their own and move around the plane to block bullets, separated by a 180º angle) or fixed (stationary pods that protect only the plane's front). Even though pod type can be switched with the pod icons, pod behavior is selected at the start of the game and cannot be changed.

Other normal items to be collected are the power-up and the extra bomb. The main weapon is also powered up if you take the icon of the same weapon type, maxing out at level 8, while pod power is increased only by taking another icon of the same type (3 upgrade levels). Bombs work according to the main weapon you’re using: machinegun generates a set of plasma bursts with homing capabilities, wide shot fires a double beam that ricochets and explodes on the top of the screen and laser creates a lightning mesh all over the visible area. They recharge over time until the default stock of three is refilled, but you can recharge them faster by wiggling the joystick. Extra bombs from icons can increase the stock temporarily, thus giving better bonuses if you can keep them at the end of the stage (5 bombs = 30K, 4 bombs = 20K, 3 bombs = 10K, 2 bombs = 3K, 1 bomb = 1K, no bomb = no bonus).

Regular items are released by destroying a characteristic helicopter, enemies with different colors or hidden ground spots. Hidden areas also lead to the discovery of secret items that either increase the score or provide an important aid to survival. Secret items can be:
There are times where a yasichi (looks like a lollipop) will appear if you die, granting maximum power for the weapon(s) you're carrying. Keeping the plane always at full power is good for scoring because every surplus power-up is worth 5.000 points. It increases rank dramatically though, making enemies much more aggressive. The evil helicopter that throws a pair of energy circles that follow you and latch onto the pods is the staple of a maxed-out rank. Those damn circles are awfully strong and nullify the bullet-blocking ability of the pods. My strategy is to atract them and bomb as soon as they latch. Besides rank, the unpredictable AI is the other factor that contributes to the insane difficulty you're bound to face: even though every stage seems to have the same patterns for enemy waves, every now and then the game will send a completely different wave to mess up the player's strategy. That's why it's never a good idea to stay in the upper half of the screen or too close to the sides, not even in the early stages. This unpredictable nature is also applied to the scoring system to a lesser extent, since sometimes different bonuses are awarded to certain waves and I have absolutely no idea why (example: first white waves of stage 5 are normally worth 10K each, but can randomly get down to 4K). The game does have a huge bug in the 4th boss: kill it within a certain time frame to get 27.000 or 29.000 points and watch this bonus get multiplied by ten (real score increase is 270.000 or 290.000). It takes some practice, but it's perfectly repeatable after a while.

Another risky source of points is the absence of pods upon stage completion. The reward is 50.000 points and far outweighs any other bonus you might get. Playing the game without taking any pods is possible but requires an even higher level of commitment because it's necessary to avoid the pod icons at all costs, let alone deal with enemies without any pod protection. I've only tried to do it on the first stage, after that I'm always thankful to have my homing pods with me at all times. My favorite main weapon is the machinegun because of its much superior bomb. I can live with the wide shot, but the laser is downright awful. Since the icons take very long to leave the screen it's pretty common to get the wrong weapon by accident and ruin the credit. I was devastated when it happened to me once as I was about to face the last boss.

Varth is a lengthy, almost physically draining game. As you get closer to the end you start to realize that a full run clocks in at about an hour or more, so late failures tend to hit harder than usual. Thankfully both graphics and music are compelling, and the game never gets repetitive despite its massive duration and the boss/music recycling of its second half. At first I thought the plane was too slow, but once I sank some time into the game I realized it's adequate for the proposed challenge. It allows perfect manipulation of the plane's hitbox, which consists of its axis only and excludes the wings. Knowing where the hitbox lies is essential to deal with the lasers that flood the screen later on. Speaking of challenge, it's interesting how stages are unsymmetrical in length and intensity, alternating between true hell and relaxing moments and most of the time not even including bosses. Stage 6 is the first real soul breaker since it's common to get to it with rank at maximum level. Stages 9-10, 12-14, 16-18 and 26-28 must be navigated and dealt with with extreme caution, that's where most of the danger is. The remaining stages are either boss fights (each one appears more than once) or a bonus area (20). Extends are score-based and come with 600K, 2M and 4,5 million points. Every remaining life in stock is worth 100.000 points upon game completion.

I heard the Japanese version of the game has checkpoints, so everybody should feel fortunate that the one included in the PS2 compilation is the World version. When playing the game on the PS2 look out for the options. Leaving them at their defaults brings up one high score table, switching to the "hardcore" setting activates another different save slot and messing around with the options gets you a third save routine labeled as "custom". It's always good to turn off continues because the firing button will trigger them and ruin the score display for single credit purposes, therefore I was always using a "custom" high score table. The rapid fire option is neat but isn't really that good in the long run, so I used a turbo controller to get better autofire capabilities. My 1CC was achieved on the NORMAL difficulty, with fixed pod type. 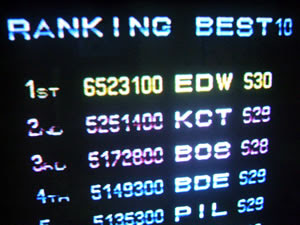