It took ten years for a sequel to come out for Prehistoric Isle in 1930. The first one had its design firmly set in ancient surroundings dominated by dinosaurs and extinct creatures. Prehistoric Isle 2, on the other hand, puts the gigantic lizards as destroyers of modern landscapes and slayers of the contemporary human kind. It's a puzzling thematic shift that not only doesn't make sense but also sets both games apart in regards to gameplay and difficulty. Those who've been exposed to the first chapter, for instance, will find the second one a breeze to play as its challenge level was considerably toned down. Everything else received an aesthetical boost provided by prerendered graphics and nifty animation frames applied to practically all enemies across six stages of relatively straightforward shooting fun.

Prehistoric Isle 2 was originally only available for MVS arcade boards, but thanks to technical aspects of the SNK hardware it can be converted for direct play on an AES console. That's how I got to experience the game. I wonder what Yumekobo (Aicom) had in mind when making it at the brink of a new millenium, a time when most developers were incorporating more advanced ideas such as danmaku, polygons and overall a more aggressive approach to difficulty. The company was strongly swimming against the tide by squeezing such an enormous amount of prerendered pixels into an old school shooter. It's visually compelling, but not in the same level of excellence as Pulstar or Blazing Star, which were released by the same team before Prehistoric Isle 2.

Following a nice introduction that shows dinosaurs invading the city and the military coming into action, two choppers take flight to battle them. Type A is blue, faster and has a straight shot pattern. Type B is green, slower and has a spread shot pattern. Both are well rounded and balanced as far as their characteristics go, but we never get to know the names of the brave pilots. Once one of them is chosen the helicopter goes straight above a street raided by a tyrannosaur, and the building crumbling down under the attack of two pterodactyls perfectly establishes the mood for what’s to come. 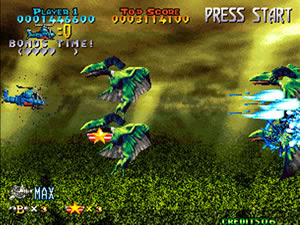 Enemies will regularly release stars that must be collected for points, and actual power-ups appear mainly from crates brought by a flying dinosaur. There are two main weapons to be selected with the icons that cycle colors (C=blue and G=red), as well as the type of missile to be used: M (straight), H (homing), N (napalm) and S (like the missile, but with a much more powerful rocket-like aspect). If you keep the fire button pressed you get a slower firing rate with occasional spread bursts that can be "directed" with the helicopter itself. Tapping the button adjusts the firepower to its fixed, more concentrated pattern. For all purposes tapping is better than holding, that’s why most people play the game with autofire enabled.

Sticking to the same power-up will increase the weapon's firepower until it maxes out. Smart bombs (instant detonation) and extra bombs complete the set of items to be collected. Each helicopter has its own animation for the bomb, which follows the nature of the main weapon (straight/spread).

When the main shot is at its maximum power the player is offered the chance to exploit one aspect of the scoring system: the next extra/surplus power-up of the same color will trigger a timer indicated by the hearts appearing below the score counter. While this special period is active the base value of every killed enemy is initially multiplied by ×2 and eventually maxes out at ×16. Certain parts of the game are key areas to trigger these bonus multipliers, and that’s where smart bombs come in handy. Smart bombs appear only during the sections where you have to DEFEND PEOPLE as they’re collected by a rescue chopper. Don’t take the smart bombs right away, wait until you have more enemies on screen: every enemy will be turned into an extra item, be it a star or – in the interest of a higher score – another power-up item to activate the bonus timer/multipliers.

Some people will signal with a large HELP sign and hang onto the helicopter with a rope once you fly over them. It’s possible to rescue up to 5 people in stages 1, 2, 4 and 5, and if you want to get the best end-of-stage bonus do not deliver them to the rescue chopper that appears before the boss with a TOUCH ME balloon. That chopper gives away items in exchange, but the score bonus will be severely reduced. People hanging on the rope don't add anything to the hitbox and give a very funny vision as you approach ground level: they won't let go of the rope, instead they keep walking after you! The remainder of the end-of-stage bonus comes from stage completion, stars collected and life count.

Even though there’s a lot going on at all times and everything is extremely colorful, backgrounds are visibly flat with no noteworthy special effects. A few transitions will show the helicopter following creatures into crumbling buildings, and if you don't pay attention you might think parallax is completely absent (it's either very shy or just ugly, as in stage 3). However, what lacks in background treatment is duly applied to the animation, as I mentioned above. The fourth boss (killer bee) gives me the creeps every time its butt inflates to a horrendous size. It’s a short sequence that instills real fear in my mind, an awesome sensation that many shmups aren’t actually capable of achieving (or maybe it’s something about insects that bugs me, I can’t be sure). As for the music, it seems to have been lifted directly from one of those old sci-fi TV serials. The resulting mood is outstanding, and my favorite tune is the one that plays in stage 5.

What makes Prehistoric Isle 2 an easy ride, especially when compared with the first chapter, is the absolute lack of randomness to the gameplay, which is devoid of rank and cheap enemies. It seems as if the developer wanted to compensate for the excruciating difficulty of Prehistoric Isle in 1930. In the sequel, bullet count is never overwhelming and benefits those who are able to keep even a low degree of cool under the heavier curtains (the baby dinosaur at the end of the first stage, the tyrannosaur before the fifth boss). Mild slowdown is also to be expected. You don’t get score extends, but you even get to keep the bomb stock if you die (note: a single 1UP can be found if you manage to protect all 30 people in the rescue section of the fifth stage). This is of course based on the game running on US hardware; in Japanese machines life stock is replaced by a health bar, and aside from the game being the same I have no idea how lives/extends work in that version.

Dinosaur/history geeks and old school shmuppers should all play Prehistoric Isle 2, it’s a mandatory game that effortlessly caters to both fan bases. It’s fun and it’s not too tough, the only problem is that the entry ticket to see it running in real hardware is rather steep. Alternative solutions aside, it’s totally worth it. In my best run I scored the amount below, playing with the type A chopper (blue) on the MVS difficulty setting with autofire. I died one life on that huge laser beam from the last boss. 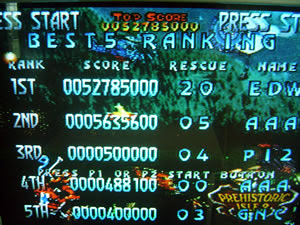