Ladies and gentlemen, I present to you one of the strongest candidates to the hitbox hell prize. I'm not the kind of guy who complains about the games I play, but Aerial Assault takes the cake as one of the most deceiving shmups ever. Sure, as with all video games it's once again a matter of learning the chops and dealing with the challenge ahead, but the process can be a bit traumatic. Unfair and unbalanced, Aerial Assault could've been a great Master System shmup if only Sega had applied a bit more polish to the game. Building a console title from the ground up to mimic the arcade experience should at least be commended though.

The plot is rather convoluted and goes against the simplicity of the gameplay, which seems to draw inspiration from UN Squadron and P-47 - The Phantom Fighter. It has something to do with an evil computer, environmental motives and an independent "freedom fighter" taking to the skies to save the planet from evil. Nothing out of the ordinary or as ordinary as it comes, with five stages of slow scrolling horizontal action. Just one quick note: in order to see the fifth stage you need to play on NORMAL or HARD settings. Playing on EASY is probably just as tough because the main cause for credit failure is in the fourth stage, but why reject an extra stage that seems to be more of an afterthought to the previous ones? 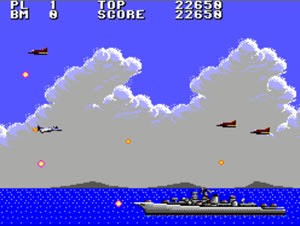 Enemy fire from clouds and ocean

Aerial Assault starts with few enemies over the ocean against a background of white clouds. There's even some parallax, which becomes bolder for the color-shifting clouds of the second stage. Parallax is a nice graphical touch across the whole game, but also of decent nature is the music, varied and totally in synch with the game's style. It tries to divert the attention from the fact that all stages are quite long. All levels have unique galleries of ground and airborne enemies, but nonetheless it's almost impossible to avoid the feeling that Aerial Assault drags most of the time. Half of the game is world-war based while the other half comes with a futuristic sci-fi feel.

The jet has the ability to fire a main weapon and to drop bombs (limited ammo). Every stage has a specific type of enemy that releases power-ups when destroyed: spinning planes, helicopters, stationary mines and space drones. The speed-up is both the most important and the worst power-up of all - you need one speed-up to actually do something in the game, but more than that can make the 4th stage unplayable due to the narrow corridors, the slow scrolling speed, unwanted power-ups (see below) and heaps of hitbox traps. Hitbox hell, remember?

Power-ups for the main weapon include the default pea shot, a 3-way shot, 5-way shot, 8-way shot, exploding shots, directional shots, needle missiles, laser and wave cannon. Bombs appear as single bombs, triple bombs, napalm (explosion bombs), crawling bombs and forward blast (the most devastating weapon in the game). Other items include a stone face for bonus (5.000 points each), 1UP (an exclamation sign), shield (starts appearing in the 3rd stage) and death (dark skull). The bad thing about all these power-ups is that they become an annoyance once you've reached the desired firepower. They always come swinging up and down towards the jet, forcing the player to constantly dodge them with the risk of being shot down or taking an unwanted item. Most of my failures in the fourth stage came from taking unwanted power-ups just before entering the boss's chamber. The good news is that power-ups aren't random, which allows for some strategy to take care of the trickiest parts.

One of the strangest things about Aerial Assault is how most weapons work within the context of hitbox perception: they aren't fired in front of the jet. The gameplay takes that into consideration in almost every possible way. The third boss, for instance, is more easily defeated with the needle missile because this particular weapon is considerably off from the jet's center line. As I mentioned above stage 4 is filled with hitbox traps on walls, but the worst part is the laser from the boss: it will hit you before you even get close to it. Dying there is as good as a GAME OVER because the damn thing can't be defeated with the default speed and firepower.

Once I was done with the basics of the gameplay I got intrigued by why I was randomly getting over 100.000 points in the first stage alone, when my normal score would be around 80.000 points. The reason for this is that the ground turrets give lots of points if you hit them with bombs as soon as they enter the screen. Doing it will accelerate the score counter and provoke a characteristic scratching sound (kinda like what happens with the first enemies of Mushihimesama). There was a time where I got nearly 200.000 points out of the first stage. The sad news is that the trick is useless in the long run because the scoring system is broken: it's possible to keep the jet below the second boss to milk its missiles for a counterstop. I couldn't find any safe spot on the first boss, but it's probably possible to do it as well.

Aerial Assault is a very challenging game for the wrong reasons, that's why the fun factor isn't as high as it could be. The path before the fourth boss is nerve-wrecking and can kill a perfect credit if you get the wrong item, let alone crash against a wall. The last stage takes place in open outer space and is a breeze to play, full of wave weapons and shields. That's also where the only 1UP in the game can be taken (there are no score extends of any kind). There are five continues that start at two checkpoints within a stage. Hint: do not use the stock Master System controller, it's awful! I used a Mega Drive controller instead (buttons B/C = 1/2). My best score with no milking at all is the one below, an improvement of 22% over my previous best. No lives were lost on this run. 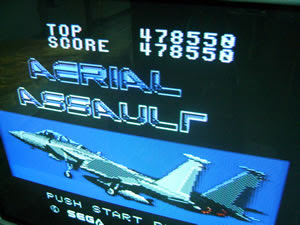