Namco’s Dragon Spirit is as much a natural evolution to the classic Xevious as it is a forefather to fantasy-themed shmups, a shooting adventure born in the arcades but soon transferred to a good number of video game consoles. The PC Engine/Turbografx-16 port is often regarded as a good conversion, one that preserves most of the elements from the original despite the natural downscaling of graphics and music.

If you venture into the PC Engine game without knowing the original backstory it’s normal to think of Dragon Spirit as a shooter where you're merely controlling a dragon across several fantasy landscapes. In fact, it’s the story of a man turned into a dragon to rescue a captive princess – something that got lost in translation because the arcade intro was removed from the port. The ending also hints at this backstory, but seeing it is no easy task. Normally there are no continues, but it’s possible to activate them with a button code at the start screen. Even then I can’t say things are any more manageable, so prepare for a good deal of practice and perseverance if you want to pursue the 1CC in this version of Dragon Spirit.

Fact: controlling a dragon is the epitome of cool in any game. That should be enough to suck anyone in, but what about growing extra heads to breathe more fire over enemies? Destroying eggs with the ground shot (button I) or airborne blinking enemies with the regular shot (button II) will release items that float towards the dragon for a brief while. Initially the most important ones are the blue (grow an extra head) and the orange (increase firepower for every three collected items). Another extra head will eventually triple the dragon’s firepower, but it will also increase its size to the point where maneuvering through bullets and obstacles starts to demand even more anticipation and focus. Every life has three health cells, allowing the player to take two hits before dying on the third and getting sent back to a checkpoint. Don’t expect to find health recovery items because there are none. 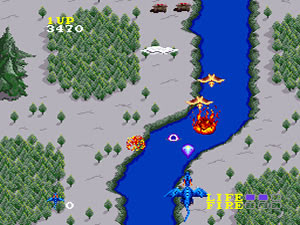 Auxiliary items appear at certain points in the game or at random. Some exclude others, so it’s important to have that in mind. The spread shot (W) will replace any other type of shot, and the same happens with the maximum flame item (green dragon). Homing fire bursts, the invincibility shield and the earthquake (destroys all ground targets as they appear on screen) are temporary. The shrinking item (S) won’t preserve the multiple heads, and collecting a blue item while shrunk will return the dragon to its normal size with only one head. The pink one (a heart) is precious: collect three of them to hatch a dragon egg and win an extra life (check the egg status beside the life count on the left corner). Most of the extra lives come from these eggs, but there are also score-based extends achieved with 50.000 and 120.000 points. On the bonus department, diamonds are worth 1.000 points and golden spheres are worth 10.000 points each. Watch out for the power-down black item, it becomes a real nightmare in later levels.

A new item introduced in this port is the speed-up (yellow). Absent in the arcade version, the speed-up starts showing up in stage 4 (desert) but only becomes crucial during the last stage, more specifically the final boss. I’m pretty sure Namco included the speed-up for that boss since at least one is essential to have a chance against him. Most of the game is expectedly easier when compared to the arcade, but that final boss isn’t there to fool around. I dare say that damn thing is harder than its arcade counterpart, if only for the spikes in the entrance chamber. I also had the impression that his boomerang attacks sometimes accelerate all of a sudden. Anyway, don’t underestimate him and keep the distance to avoid getting cornered.

The most drastic change in the PC Engine port of Dragon Spirit is the exclusion of the underwater passage and the dark caves, with stages 7 and 8 sharing the same theme of the original final stage (castle). Other than that animations were properly preserved, with no missing elements across the remaining stages. These still seem a bit overlong, but in the end they all serve as a satisfying preamble to the unfair final section of the game. Sharp colors all around and decent music for PC Engine standards complete the package.

Since there are no extra points to be gained with surplus power-up items there’s no need to get out of your way for them, which in my opinion is the main cause for avoidable/stupid deaths. In any case racking up high scores isn’t worth it because Dragon Spirit has a flawed scoring system. Most of the points are to be won during the last stages, but don’t even think of milking checkpoints and lives for score. Here's a straight reason not to: on the fifth boss refrain from hitting the spider and keep destroying its webs for unlimited points.

Scoring aside, the game is fun (the magic is definitely spoiled by the frustratingly tough final boss though) and technically belongs to the upper tier in the PC Engine shmup library. In my 1CC run I lost a few lives in the castle but eventually reached the last boss with two heads and two health cells. I got hit once, succeeded in my last breath and took the picture below. Warning: the end credits halt at a final screen that can’t be reset, not even with SELECT + START. Therefore the score you get on a 1CC is lost forever once the credits start rolling (normally you just need to pause the game to check your current high score). 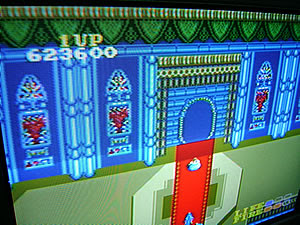