I was kinda bored a few days ago. R-Type was kicking my ass and I wanted something to keep me busy in a different way, so I thought it would be nice to keep with the Master System connected to my front A/V in the living room. I woke up early, dusted out Scramble Spirits and gave a quick read over the manual (something I never do, but as I said I was bored). I fired up the game and watched the intro telling the story of how the world was in peace after a global war but a new threat was at hand, courtesy of an outer space enemy. As expected, I was one of the fighters summoned to "scramble" and defend the Earth.

Scramble Spirits is originally a rather impressive arcade game made by Sega, which drew inspiration from Capcom's 19XX series and, to a minor extent, Toaplan. The Master System was one of the few early home consoles to receive a port, and although the game does a regular job at keeping the resemblance with the arcade (there's co-op play!) it's almost totally lacking in excitement and challenge. Bomber Raid, a Master System exclusive, came out at around the same time but did a slightly better job with very similar gameplay concepts.

What basically hurt this game are the drabness of the graphics and the excessive flicker. Flicker becomes less painful the more you play, but the graphics fail to attract any attention due to their simplicity. When they try to be a bit more complex the result is a cumbersome mess of colors, it seems the graphics went corrupt or something. The brief take-off animation inserted between stages works better although it halts the action, as well as the brief text messages prior to every section in the game. The music resembles the original compositions but doesn't stand out in any way, also failing to add to the game's overall assessment. 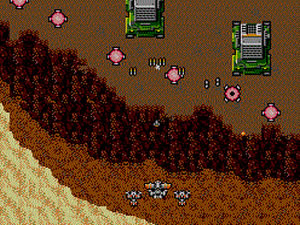 Mines and tanks in the desert

The basic weaponry is comprised of a main gun (for airborne enemies) and a ground weapon (for ground enemies) which are fired at the same time with one single button. The only upgrades available are the smaller planes/options released when you destroy the large choppers that remain stationary after appearing from the top. You can get two of them (one on each side of the plane) and with the other button in the controller arrange them in two formations: when positioned at the rear they add more firepower to the main gun (for airborne enemies), when positioned at the front they add more firepower to the ground weapon (for ground enemies). These options are vulnerable to attacks just like the main plane, so it's pretty easy to lose them. In order to trigger a bomb attack you need to have at least one option. Press both buttons (1+2) at the same time: this will launch the little plane forward and create a powerful explosion, after which the little plane will drift down smoking for you to claim it back. After that wait until the smoking is gone to repeat the attack, otherwise the little plane will disappear once the blast animation fades.

The above paragraph alone hints at least at a dynamic experience from a gameplay standpoint, right? Unfortunately the enemy forces are equipped with very slow bullets (maybe to compensate for the flicker and the slightly iffy collision detection) and the extremely powerful bomb blast makes bosses even easier to kill.

Prepare for the way Scramble Spirits deals with basic game information, it's a tad awkward. Only by dying it's possible to see the remaining number of lives. When all lives are gone a very faint CONTINUE message shows up instead, but in the heat of the battle it's pretty easy to miss it because any button press will trigger the continue function. Well, at least the score is reset and continues are only available up to stage 4.

Extends are score-based and come with every 500.000 points. The problem with the score is that it isn't shown during the stage itself or even registered if you don't make it past the boss. You need to defeat it if you want to collect the amassed points from the level and from the bonus areas, which appear in the middle of the odd stages only (1, 3 and 5). In these areas the plane's sprites are zoomed in a little bit and speed gets a slight boost so that you can try to take down everything ahead of you in a short amount of time. You don't die in these sections, but getting hit or crashing against something will freeze you for half a second. Crashed items won't count for the bonus: 100% destruction ratio equals 200.000 points, any percentage below that is applied over 100.000 points instead.

When the ending sequence is over the game loops with faster enemy bullets. It doesn't represent that much of an excitement increase because the game is still easy, not to say boring. There's a single point where it offers a bit more resistance: the third boss, a flying fortress that fires exploding bubbles and slow homing shots that leave very little room to move around safely. Other than that Scramble Spirits is a breeze.

A few recognition rounds and I was done with the game before lunch. I died my last life out of boredom in stage 3-3. Since there's no autofire in the game I used a Rapid Fire unit to get autofire on button 1. 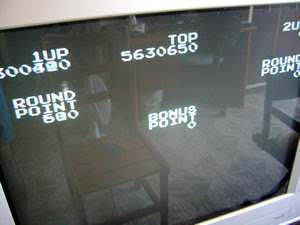