Once upon a time a video game company named Compile created a shmup series called Aleste, which in some of its latest installments adopted mecha-based designs for character sprites instead of the well-known spaceship of old. It was a very recognizable trademark, made popular by the success of games like MUSHA, Spriggan and Robo Aleste. Much less known or successful, developer Vic Tokai dared to mimic these aesthetics with Imperium, which seems to be a downgraded offshoot from the games above. It’s not possible to envision the similarity going by the game box alone, it actually reminds me of a high-tech robot brawler instead of a proper shooter.

Known as Armored Maneuverer Dion in Japan, Imperium tells the story of an alien invasion to Earth in the near future. A powerful robot is sent into battle to free the cities occupied by the evil aliens and to crush the enemy base. It’s up to the player to guide Imperium (the robot) across six long stages over urban landscapes, forest, seas, desert, a large spaceship, moon bases, outer space voids and the mandatory alien fortress. It’s nothing out of the ordinary for a 16-bit shooter, but seeing the game in action might certainly lead unaware spectators to wonder if it’s yet another entry into the Aleste series. However, with the exception of the flying robot Imperium has little in common with Compile’s more famous shooters, especially on the gameplay front. 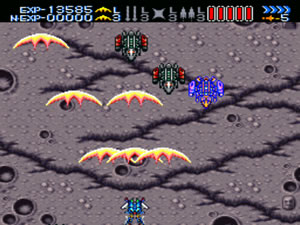 Patrolling the surface of the moon

Right off the bat you notice that lives consist of a health meter with five hit points. Lose them all and the game ends. In order to recover health and power up Imperium it’s necessary to kill enemies and add their value to the EXP counter, a convenient substitute to the regular score counter. A lower counter title NEXT EXP (N·EXP) tells how many points you need to reach the next upgrade and recover one bit of health. Starting out with just a straight vulcan weapon at level 1, you subsequently get a wave shot, a laser and a directional sparkling shot (fires in the opposite direction you’re pointing at). Further upgrades will boost the weapon power to level 2 and level 3 (maximum). Getting hit will take away one health point and downgrade the currently used weapon by one level.

The control scheme uses all four face buttons in the controller: by default Y shoots, B selects the weapon (left → right), X selects the speed (out of 4 choices) and A triggers the bomb. The more you advance in the game the more important higher speeds become. Bombing causes the screen to be raided by a series of missiles that damage everything on screen, wipe regular bullets and provide brief invincibility to the robot. Since upgrades are score-based the only item you’ll come across in the game is the extra bomb, which is always released by specific large enemies within the stages. Shooting and bombing comprise the basics, but selecting the most appropriate weapon for each enemy and correctly controlling speed are what really helps to achieve victory in this tough shooter. Making mistakes with the buttons is the main cause of failure in the beginning, and while it’s possible to reconfigure everything it’s just weird that you can’t remap them to the controller shoulders (as I would’ve done).

Even with the bullet jerkiness – which requires a slightly different approach to dodging – Imperium has a considerably decent difficulty curve in its first half. Enemies will arrive in slower and foreseeable patterns. Harm to the upgrade scheme will only happen after you’ve acquired all four weapons, therefore you can allow yourself to take a few hits in the process. Bosses are the main challenge and can give a little trouble, such as the ones who are only vulnerable for a short time window (2nd mid-boss and 3rd boss). However, once the 4th stage starts drones will swarm faster and more aggressively from both sides and from below. Large battleships will clutter the screen with strong minions and unless you have a level 3 vulcan or laser you’re in deep trouble. Several fast scrolling sections with lots of turrets firing blazing fast bullets will test your ability to keep that wave weapon maxed out. The increase in difficulty is so steep that the whole stage 4 seems to have been designed to screw the player over and over, and the three available continues aren’t of much use because you can’t do enough damage with all weapons starting at level 1.

Backgrounds in Imperium are mostly quite poor, but this is somewhat disguised by several abrupt variations in scrolling speed. Although the overall enemy design is of the same caliber, a bit more character was given to bosses and mid-bosses. They’re often static-looking and devoid of animation but move around a lot, and once again the 4th stage comes to mind with its insect-lady boss, definitely the toughest of them all. The good news is that getting used to the 4th stage makes it easier to get to the end of the game. At this point general gameplay gets a bit predictable: if an enemy wave comes from the left you can bet another one will arrive from the right. All weapons in the game are equally useful, and you can even use them in conjunction with the slowdown to make the game easier. In regular circumstances slowdown kicks in when too many enemies/bullets are on screen, but a good example of how to exploit it is on the fight against the 5th boss: during his energy ball attack a level 3 laser will cause enough slowdown to move around safely with speed set to 4. Any other weapon power level takes away the slowdown and leads to a harder battle.

Imperium’s worst problem besides its weird frame rate and the sudden difficulty spike is the amount of dead space. There are long sections where nothing happens, especially in stage 3. Although it’s no disaster, there’s nothing special about the soundtrack. Infamous mode 7 appears in a neat rotation effect during the game’s introduction but is rather shy during the game itself, with a few zooming enemies here and there. The rip-off stench slowly fades as you start to realize the game is tougher than the regular Compile mecha shmup, but this doesn’t mean it’s more fun, not even close. It’s a dry, emotionless ride best suited to grinders and to curious Compile fans.

Since there’s no high score display in this game I paused right after I killed the last boss and took the picture below (NORMAL). After the credits roll you get stuck in an end screen and need to reset the console to keep playing. 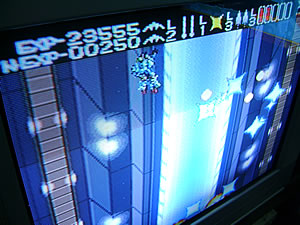