Of all ports produced by Konami for Parodius Da!, the second chapter of the now classic Parodius spin-off series of Gradius, the one made for the Super Nintendo strikes me as the most interesting of them all. The game was already long by regular standards, but Konami went the extra mile and added another full-fledged level before the final fortress, turning the game into a loopable 11-stage behemoth of Gradius-infused fun. It’s yet another proof that Konami loved the SNES hardware as far as shmups go, so if you’ve got the console and haven’t tried this particular version of Parodius Da! yet you’re missing out on a great game, which didn’t get a release in Western shores but can be properly savored with the Japanese and European editions (in Europe it appeared under the title Parodius - Non-Sense Fantasy).

Parody wasn’t really a strong trait of Parodius on the MSX, the first game. In Parodius Da!, however, three Gradius games (and Salamander) are taken as direct inspiration for stages and enemies, as hinted in the several screens of the introduction sequence. From Gradius we get the volcano stage and the last stage/boss. Gradius II is there in the form of the galactic dancer and the bald eagle with the USA hat of the second stage. Bubbles (some of them with nymphs inside) are the main contribution of Gradius III. Even the first game is parodied since the penguin boss reappears in the first stage. R-Type receives a homage on the spaceship level, the only one where moai statues appear – watch out for the female moai boss and the dirty prank related to her projectiles.

The experience of approaching the game is made different according to the character chosen. It’s possible to play it as pure Gradius, since Vic Viper possesses all capabilities from the first Gradius game. The same old rules apply: collect capsules to highlight a weapon array. If you decide to play the game on "manual power-up" you'll need to activate the weapon array slots with a dedicated button to get the desired upgrade, be it speed, missile, double shot, laser, option or shield. Choosing "auto power-up" will make the game activate the upgrades for the ship automatically (good for beginners or children, but not useful at all if you want to have full control of the ship). Since this is a Parodius game players must be aware of the new slot in the weapon array, the !? bogus switch. Activating this will take away all power from the ship and send it back to its default condition. !? is located between option and shield and normally offers no danger, unless you take one of the roulette capsules that makes the weapon array go crazy. If this happens the player should take the opportunity to exercise his/her ability to press the power-up button carefully. 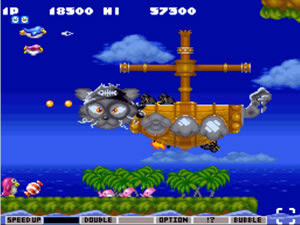 All weapons are a bit different for the remaining characters of the game. Takosuke the Octopus uses a configuration inspired by the Salamander games, where tail gun replaces double shot and ripple laser replaces regular laser. Twinbee also has a tail gun but replaces laser with a 3-way shot. Pentaro the Penguin uses the combination of regular double shot and daggers with a cluster exploding effect. All characters have slight variations for missiles, with dedicated pre-stage musical themes and specific sprites for shield and power-up capsules.

Coming back to Parodius Da! on the SNES was relaxing, as it is with most of the games we’re familiarized with. It’s a little easier than the original Arcade original but just as fun. It could be just a vague impression from my sound setup, but I like how the bass seems more pronounced on the music for the SNES. Memory served me well on the strategies but I had forgotten how long the game actually is, so allow me to do a quick breakdown on all stages with some notes:

More than the actual gameplay being a bit toned down, what makes this port of Parodius Da! easier than its Arcade counterpart is the extend scheme: one extra life at 20.000 points and another one for every 100.000 points afterwards.

Scoring in Parodius Da! has everything to do with yellow bells. Bells? Yes, bells just like in Konami's own Twin Bee. Enemies that are supposed to release power-up capsules will regularly drop bells instead, which change color as the player shoots them. Each consecutive yellow bell collected will increase its value from 500 to 10.000 points in five steps. If you let one bell pass by the next one will be back to 500 points. Keeping a constant stream of maxed out yellow bells is a nice rush and adds an extra dimension to the game. Other colors for bells yield special powers to the ship, such as a smart bomb (blue), three stationary energy bars (brown), enlarging invincibility (green) and a horn that displays Japanese kanji (white). Blue and brown are kept for the player to trigger them with a specific button, but remember that while any of these bells is active the shield cannot be used.

Another treat Konami included in the SNES port is an Omake (special) stage with a lollipop setting. This mode is a single level with way more items to collect and no checkpoints.

I always thought that mocking sound that plays every time you die can be annoying if you're struggling to get past a tougher section. On the other hand the GAME OVER music is outstanding, uplifting enough to make me forget about the mockery - penguins, cats and all - and consider this game a solid and easygoing entry into the Gradius way to shmup. My new high score was achieved with Vic Viper on defaults (difficulty 4), a humble improvement of 15% over my previous best. I died my last life in stage 2-2. 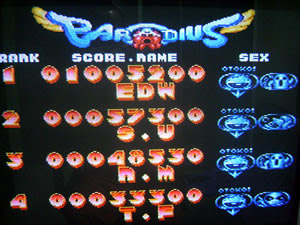 The parody continues on the SNES in Gokujyou Parodius.
Posted by Edward at 2:14 PM