Although not a proper sequel to Pulstar, Blazing Star often receives the title for its graphical similarities with the former. Both games exude excellence and are regarded as highlights of the Neo Geo hardware. However, whereas Pulstar blatantly rips off the style of Irem’s R-Type, Blazing Star adopts a more straightforward approach towards the horizontal shooter formula, free of checkpoints and with a nice array of different spaceships to choose from (among these is Dino 246, the solo protagonist from Pulstar). It also allows 2-player co-op, something the previous game lacked.

Blazing Star for the Neo Geo AES is an extremely rare item, the only rarer shmup for this system I can think of is Twinkle Star Sprites. These days it's easier to play the game since it's also been made available for the Playstation Network and tablets/smart phones. It was originally released only in Japan, and much like Zero Wing part of its old fame comes from the Engrish that plagues the game from start to finish. There’s even a line of thought claiming that the word FAIL is the popular noun/interjection that we know today because of Blazing Star. Check it here, but note that the article is wrong when it states that the meme origin relates to a GAME OVER message. The text actually refers to a taunt displayed when the player fails to kill a stage boss within the allotted time limit.

As we all (don’t really) need to know, an intergalactic war was waged between planets and a powerful enemy enslaved humans for its evil deeds. Hope is once again alive as six pilots regain consciousness and get ready to exert great justice against the alien scum. Your mission, should you decide to accept it, is to take on the role of one of these pilots and fly through seven stages guarded by giant transforming machines of doom. Pre-rendered sprites create a swift 3D look on several backgrounds, colors are used and abused with awesome taste and the scrolling speed/direction shifts back and forth as you go. It’s pure and intense 16-bit shooting bliss. Another fine aspect of Blazing Star is the female announcer. At first listen she might be a little annoying, but soon enough I got used to her cheering. POWER-UP! BONUS! WO-HOO! The character art/treatment could’ve been a bit more fleshed out during the game, but considering this is a shooter the animated intro does a fine job with them. 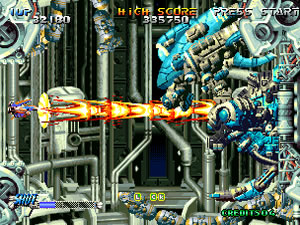 Hell-Hound takes on the 3rd boss

Players need to use only two buttons to unleash the power of any of the ships selected. The first button shoots and activates a charge shot. The second button is only used to “break” the charge shot during its animation, making it behave in a totally different manner and imposing a brief recharge delay. Power-ups (Ps) will increase firepower up to four levels, further ones are worth 300 points each. All other items in the game have explicit influence on scoring, such as the character panels that form the word LUCKY, the winged orbs/spheres and the blue gems. The implicit influence of all items in the game, on the other hand, is what makes Blazing Star an intricate dynamic challenge that needs to be thoroughly learned if you want to extract the most from its scoring system.

Here’s a rundown of all ships and their weapons:
All ships have distinct speeds, with differing details as to how their weapons behave. Aryustailm's charging time is longer and its break shield needs considerably more frames to be activated after the flare is out. Dino 135's break is useless. Pulstar's Dino 246 has a permanent R-Type force on its nose, but is not allowed to fire during the cooldown period after the break. Everything considered, Hell-Hound and Windina are my favorites but any of the ships is fine if you just want to blast your way through the game mindlessly. The real deal will only show up when you decide to score higher, and that comes with a healthy amount of techniques and secrets. Basic scoring devices involve (1) killing multiple enemies with the charge shot in order to apply multipliers to their base value and (2) collecting all blue gems to increase their value from 300 up to 81.560 points. It takes a lot of gems to reach the maximum bonus, and unless you’re already maxed out for a while you can’t miss a single one or else their value will go down one step for each missed gem. The rule of thumb is that a blue gem will appear for every 8th enemy/bullet destroyed.

Now we come to the more intricate techniques, the ones related to increasing the number of on-screen objects and bullets. Spheres with wings, known as event items, are the answer for this. Event items appear from time to time and are apparently useless, but there are two ways of exploiting them. First method: release a sphere (any color), take it and refrain from shooting until you hear a sound cue as it leaves the screen; the next sphere will be larger and will contain a kanji inside; take it and all enemies destroyed with the regular shot will be converted into power-ups. Second method: keep releasing spheres but don’t take them; each successive color represents a multiplier that grows from ×2 (yellow) to ×128 (rainbow); take the rainbow sphere to apply the highest multiplier on all destroyed enemies. Long story short, rank is the answer to get more enemies/objects on screen. Rank is influenced by everything but is more affected by collecting successive power-ups. The more Ps you take the higher the aggressiveness of enemies and bosses. Therefore, method one above (the kanji event item) is the main source of rank boost because it allows lots of Ps to be collected. Allied with strategic use of the rainbow sphere, high rank play is the only way to achieve higher scores. It takes lots of practice and environment control because sometimes those damn items will float into walls or out of the screen before you can get to them.

Unfortunately, when you go for all power-ups and high rank play there is a serious point of concern in Blazing Star. Whenever you milk the first boss for power-ups sprite flicker kicks in heavily, making it hard to see his bullet spreads. Later on flicker assumes a new dimension as you reach the last form of the 6th boss: the first few streams of pink homing bullets are invisible! The only remedy is to anticipate their trajectory as they’re spawned from the turret. Hardware abuse or deliberate design choice? The good news (?) is that aside from these two instances (1st and 6th stages) I did not run into any other flicker issues in the game, but do you want to know what’s more aggravating? There are no extends in Blazing Star. It’s just those three lives, so GET SERIOUS, DON'T BE PANIC and don’t allow yourself to die before getting to that invisible fire curtain of death.

Even with the problems above Blazing Star strikes me as a superlative shooter. The difficulty curve is somewhat unbalanced (level 5 is a breeze while levels 3 and 6 are hard-hitters) but that’s not enough to hurt the impressive attention to details, the pop-fuzzy soundtrack or the sheer intensity of the game as a whole. Let’s not forget about the little secrets, such as the process of getting the last character panel in stage 3 or the blue gem walls that are triggered if you perform certain actions. These are not intuitive at all, the best way to learn is to watch someone do them. Upon completing a stage you’re awarded a few bonuses, and if you succeed on getting LUCKY there’s an additional reward as well. However, as you make progress you'll notice that these end-of-stage rewards have little weight in the overall score.

My 1CC run was done with Windina on the MVS difficulty setting. With Windina it's possible to play the game without any autofire because gentle tapping is enough to get a decent firing rate. That's absolutely not true with the Dino ships, for instance. In any case autofire does help, so I had it available to use in certain areas (PS2 controller via a Tototek adapter – a killer combination that’s nothing less than perfect). Note how the occasional slowdown (mostly on explosions and boss fights) makes it easier to get a fast firing rate just by regular tapping. Once the credit is over a few cool stat screens are displayed, showing data such as a performance table for all stages and your final power-up level. I didn’t get to photograph them, but I noticed I had maxed out the power-up counter (255) in the credit below. 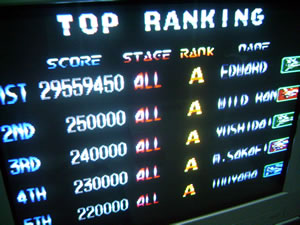