Ever since it came out Sine Mora generated strong polarized opinions on both sides of the shmup community spectrum. Long story short, it was highly praised by the mainstream gaming press but utterly desecrated by the so-called hardcore shmup fanbase. This relates easily to the neverending development battle that puts graphical lush against gameplay mechanics, a delicate dichotomy that defines and ultimately segregates the shoot'em up genre from all other types of gaming branches these days. I like when a game raises so many heated arguments because it makes me want to try it on a clean slate. On controversy alone Sine Mora is an undeniable winner, but here's my quick two cents: gameplay is really different (hence the hatred from hardcore people) but the game does try to cater to all segments of players (hence its mainstream success).

There are two main modes in Sine Mora: Story and Arcade. As its name implies, Story mode contains heavy doses of voice narration/dialogue, text messages and cut scenes in between the actual gameplay, as well as stage swapping and extensive interaction between a multitude of characters. Its target audience is the player who always thought of the absence of an explicit story as the Achilles' heel of shoot'em ups. Arcade mode, on the other hand, throws the player immediately into action on higher difficulty stakes, meaning it behaves more like a traditional shmup. Both modes have two difficulties each, Normal and Challenging (Story) and Hard and Insane (Arcade). The first thing I did when I fired up the game was try Story mode, only to be extremely bored by chunks of stuff who held me from actually playing the game - a lengthy unskippable tutorial and the aforementioned text, dialogue and cut scenes. That was the end of Story mode for me, so I have absolutely no clue of what's going on during those speeches in Hungarian.

The truth is that I play shmups to blow up stuff, if I want a story I read a book or go see a movie. Some people might fancy that much wording in a shooter, but for me it's enough to know that Sine Mora has a steampunk setting reminiscent of Steel Empire, only with gorgeous HD visuals and a new way to deal with lives. This is, in fact, its main departure from the norm. There are no lives in this game, instead the player must deal with time. If that dreaded timer reaches zero it's GAME OVER, so all efforts must be directed at keeping it at safe levels. Get more time by killing enemies and taking extend items, watch the timer deplete faster by getting hit. It's the same basic rule of all shmups, slightly disguised as something different. Real difficulty comes with the fact that every section has its own (sometimes quite low) time limit, and it's not possible to carry over extra time from one area to the next. Remaining time is always converted into points in what the game calls TIME STABILIZATION. 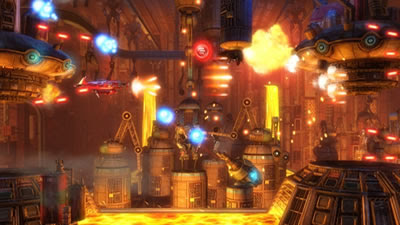 Upon starting a credit in Arcade mode you need to make three important choices. First there's the ship/plane: the Merenstein VI, the BS4-VR Soprano or the GE-22 Liberator. Ship choice defines main firepower (button A), but subweapons (button B) are associated with the pilot. There are seven pilots to choose from, each one with a very distinct subweapon. And then there's the capsule type that dictates how you activate the capsule power (RT): speed-up (slows down enemies and bullets), rollback (rewind time, even if you die) and reflection (protects the ship against all harm and deflects enemy bullets).

All ships start with pea shots, but soon enough power-ups show up from destroyed enemies. With one dreadful and very rare exception all items are useful. Here's a list from most to least important:
There's one item missing from the list above, the medal coin. This is where the scoring side of Sine Mora kicks in. Medals appear after every 5th enemy killed and increase in value from 1.000 up to 100.000 points, provided you don't miss a single one. Missing a medal will break the chain and send its value back to 1.000 points. Another part of the scoring system comes naturally: the multiplier. Play without getting hit and without using capsules or subweapons, and eventually it maxes out at ×9. Last but not least there's the end-of-stage bonus, which awards extra scoring for destruction ratio, hits not taken, unused continues and rank time allocation. Rank is the same old device that makes the game harder the better you perform on it, and here it's divided in classes C, B and A. If you play well the rank meter will gradually increase and reach class A, thus incurring in more and faster enemy bullets. Using capsules/subweapons and getting hit can send it back to grades B or C. The score is properly rewarded according to the amount of time you spend on these rank classes, and the greatest chunk of the end-of-stage bonus definitely comes from keeping a class A rank at all times. Note: there's no rank in Story mode.

Graphic design is the best aspect of Sine Mora, there's no doubt about it. However, beyond the eye candy and the basic rules about lives and time control lies a layered shooter that's relentlessly cruel. Getting past the first mid-boss Kolobok is reason enough for some players to give up Arcade mode. Thanks to the Story side of things every stage and boss has a specific name, something that lends personality to the game. Developers claim that Sine Mora was heavily influenced by Battle Garegga, Einhänder and Under Defeat, but it's obvious that this influence is purely aesthetical rather than functional (the almost invisible underwater missiles reminded me of Battle Garegga, the first half of stage 6 is a homage to Einhänder). All things considered though, it's clear that the Arcade mode in Sine Mora could've benefited from better balancing. While the pacing is okay (cut scenes can be accelerated with the left bumper) there's no warm-up at all once the game starts, it's just full throttle time-based pressure from the get go (Kolobok's fault). Bosses are somewhat uneven and vary greatly in difficulty, and despite a few hollow spaces here and there the player is bound to face all types of bullet shapes, lasers and missiles as beautiful landscapes go by.

Sine Mora offers a challenge that can definitely be classified as unique due to the timer scheme. It gets rewardingly fun once you get to know how to use the items at your disposal. However, the share of infuriating details is higher than usual, with a few single mistakes meaning instant GAME OVER (let's not even talk about the piano thing). For instance, once you get hit all your power-ups will scatter away, and if you're not fast enough to reclaim them they'll be gone for good. If this happens you're left hopeless and might as well kiss the credit a sorry goodbye, especially prior to boss fights (hint: if you're not using the rollback capsule and lose all power-ups prior to a tough part suicide at once to continue and at least replay the section for practice). Other tricky or cheap parts are the pipe transition with lasers that must be avoided by hiding behind the debris, the hydraulic columns of the furnace area and the train section after the Domus boss. It's practically impossible not to die when reaching these parts for the first time, an aspect that definitely qualifies Sine Mora as a heavy memorizer.

Memorizer it is, but that's a good thing to have on such a long game. Every enemy wave and boss will attack you the very same way, so progression isn't impaired by random enemy behavior. Randomness is reserved to item drops, with the exception of medal coins. Sometimes you get to the first boss with a level 7 firepower, sometimes it's a mere level 4. Sometimes the game gives plenty of items for you to face Kolobok, sometimes it just doesn't happen. Although this seems like bad design it doesn't bother so much after a while. What's truly bad about Sine Mora is the music, a sleep-inducing collection of themes that do absolutely nothing to match the beauty of the graphics. With such a pleasing design and at least two large, exquisitely animated bosses per stage it's just a shame that the music can't match the grandeur of the graphics. For what it's worth only Papa Carlo's and Ophan's themes sounded a bit decent.

Another minor reason for frustration is the fact that most of the pilots aren't readily available in Arcade mode, they must be unlocked by playing Story mode. Tying the knots between both game modes like this wasn't a wise move, regardless of the related customizations available on Score Attack and Boss Practice modes. For this reason I adopted default pilot Argus Pytel, the one with the seeker missiles as subweapon. My favorite capsule power is the "reflection" type, and the ship definitely has to be the G-22 Liberator. It's more effective at lower power levels and has a nice spread when fully powered-up. Here's my general strategy to shoot for higher scores: (1) always try to go into boss battles with a shield and (2) dodge everything without using subweapons or capsules to preserve the multiplier, (3) if you get hit take advantage of the invincibility provided by the shield.

As I mentioned above I skipped Story mode completely. I did notice that you get to play with several configurations of ship + pilot + capsule, with much less aggressive time constraints. Granted, it's great for beginners and lovers of storylines in games. Beating it probably serves as good preparation for the Arcade mode, with the extra challenge of spiralling suicide bullets in the Insane difficulty.

Here's my 1CC high score on Arcade mode, Hard, using the GE-22 Liberator ship piloted by Argus Pytel with reflection capsule type. No turbo fire was used (it is known that turbo controllers make the game easier). Unfortunately there is no offline high score table for Sine Mora. I'm glad I took the picture below after I beat the final boss - the online leaderboards are bugged and did not register the score, keeping it at a previous lower achievement. 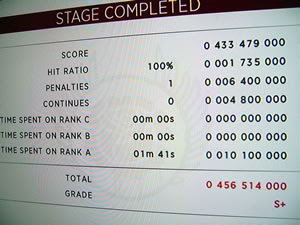